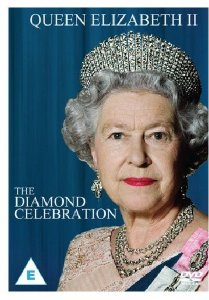 Arguably one of the most historically significant events of 2012 is Her Majesty the Queen celebrating 60 years on the throne - making her the second longest reigning monarch after Queen Victoria.

The Queen's Diamond Jubilee is a time to reflect on her extraordinary life and here is no better way to do so than watch the forthcoming DVD and Blu-ray from Odeon Entertainment Group: Queen Elizabeth II - The Diamond Celebration. This special 90-minute documentary - which is the only documentary on the Queen available in HD Blu-ray as well as DVD - is the definitive story of how a young Princess, who was not expected to become Queen, has reigned for more than 60 years.

Queen Elizabeth II - The Diamond Celebration tells the fascinating story of the Queen who has served her nation throughout good and bad times. As one the two young Princesses, Elizabeth captured the hearts of the nation and although her reign has seen major social, political and cultural changes, she has remained a figure of admiration and respect: a traditionalist who has never lost her sense of duty to the nation.

Featuring newly restored archive film, the Queen's life as a young Princess, her marriage to Lieutenant Philip Mountbatten, the Coronation in Westminster Abbey on 2 June 1953 and her early years as a Queen and mother are shown in high definition for the very first time. The Blu-ray edition also includes an exclusive 30-minute feature of The Queen and Prince Philip on their 1963 Royal Tour of New Zealand, which has been unseen for nearly 50 years.

The programme features contributions from Robert Lacy (author of a pioneering biography of Queen Elizabeth II), Dame Helen Mirren (who won an Oscar® for her lead role in the film The Queen), Gyles Brandreth (the author of two acclaimed royal biographies Philip & Elizabeth: Portrait of a Marriage and Charles & Camilla: Portrait of a Love Affair), Tim Heald (author of the official biography of Prince Philip), Hugo Vickers (author of many royal figures), Camilla Tominey (the Royal Editor of the Sunday Express, Royal Correspondent for This Morning on ITV and a Royal Expert for the American television network, NBC), and Ingrid Seward (Editor-in-Chief of Majesty Magazine) and Nicholas Owen (Royal Correspondent for ITV News from 1994 to 2000.

Much has happened in the 60 years of The Queen's reign including the break-up of the British Empire, the births of her four children, the Royal tours of the Commonwealth, the wedding of Prince Charles and Princess Diana, the momentous events surrounding her tragic death and the incredible spectacle of Prince William's marriage to Catherine Middleton in 2011.

Queen Elizabeth II - The Diamond Celebration is the definitive assessment of how the young Princess became a regal Queen.