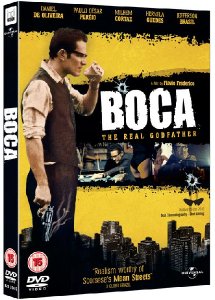 From the country that brought us intense and gritty cinema such as City of God and Elite Squad comes this thrilling film based on real-life events adapted from the autobiography of gangland boss Hiroito Joanides de Moraes. Hiroito, was infamous as The King of Boca do Lixo (an area downtown São Paulo in the 1950's notorious for its nightclubs, strip joints, prostitution, bars and drugs).

Following the violent murder of his father, in which he was stabbed over forty times with a razor, Hiroito was arrested and accused of the crime, but ultimately not charged. However two months later, and aged just twenty-one, Hiroito bought two guns and moved to Boca do Lixo, fast becoming one of the most successful, dangerous and wanted criminals in Brazil. Boca charts his journey through the violence, the girls, the guns and the drugs as Hiroito becomes one of the most feared and legendary gangsters in Brazil.