DVD
Paris When It Sizzles (UK)

Breakfast at Tiffany's is coming to Blu-ray this September 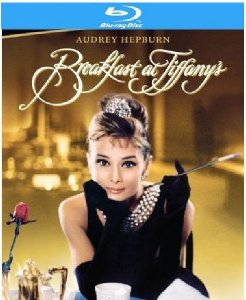 Paramount celebrates the 50th Anniversary of Breakfast at Tiffany's with a brilliant Blu-ray remastered release.

Fully restored and remastered, this iconic film stars the exquisite Audrey Hepburn, as the free-spirited Holly Golightly in the unforgettable masterpieceBreakfast at Tiffany's, whichdebuts on Blu-ray on 12th September 2011, from Paramount Home Entertainment.

Celebrating its 50th Anniversary this Blu-ray includes over 90 minutes of bonus features on the making of the movie, Audrey Hepburn's timeless style, the music of Henry Mancini and much more.

Based on Truman Capote's best-selling novella, Breakfast at Tiffany's captured the imagination of audiences everywhere and made an indelible impact on movies, fashion and society at large. In director Blake Edwards' timeless classic, Hepburn's intoxicating New York party girl embarks on a wildly entertaining, comedic adventure to find love in the big city.

Breakfast at Tiffany's has been fully restored and remastered for this 50th Anniversary Blu-ray release, which boasts over 90 minutes of special features including an exploration of the making of the film, a look at Audrey's iconic style, a tour of the studio lot, featurettes on Henry Mancini and Tiffany's, commentary by producer Richard Shepherd, photo galleries, the original theatrical trailer and more.


What the critics say:

"It's with good reason that after appearing as Holly Golightly, Audrey Hepburn - cigarette-holder in hand, subtly streaked hair pinned high - is still a poster icon for those aspiring to the kind of classy romance that doesn't seem to exist anymore." - Empire ««««

"This is a charming fairy tale about a lost girl looking for love in the big city. Audrey Hepburn and George Peppard sparkle to the memorable refrain of 'Moon River"' - Film4 ««««

Disc contents are as follows:
· Commentary by producer Richard Shepherd
· A Golightly Gathering
· Henry Mancini: More Than Music
· Mr. Yunioshi: An Asian Perspective
· The Making of a Classic
· It's So Audrey: A Style Icon
· Behind the Gates: The Tour
· Brilliance in a Blue Box
· Audrey's Letter to Tiffany
· Photo Galleries:
· The Movie
· Production
· Publicity
· Original Theatrical Trailer

Paramount Home Entertainment (PHE) is part of Paramount Pictures Corporation (PPC), a global producer and distributor of filmed entertainment. PPC is a unit of Viacom (NYSE: VIA, VIA.B), a leading content company with prominent and respected film, television and digital entertainment brands.

I've got to say, I've never really got the appeal of this movie.  Maybe I'm not the target audience.  It's not that I don't like Audrey Hepburn - she's absolutely luminous in most of the movies she's in (my personal favourite being How To Steal A Million with Peter O'Toole).  I mean - look at her in Charade with Cary Grant, or Roman Holiday with Gregory Peck.  And Sabrina with Humphrey Bogart.  She's the most marvelous foil for some of the greatest actors (and biggest hams) in Hollywood.  But there's no chemistry in this picture.  I'm more worried about her soggy cat at the end of the movie.

I am, however, delighted to see Paramount Home Entertainment releasing something that isn't current catalogue or starring Tom Cruise.  I do hope the Studio will embrace Blu-ray and start releasing some of its classic legacy in high definition.  If they release it, we will buy...
posted by Mark Oates on 22/7/2011 03:48
I saw Roman Holiday recently and loved it. I've got the Hepburn box set and that was the first film in it we watched. When we get to Breakfast at Tiffany's I'll see if I agree with you or not, as I've only seen it once when I was a teenager which isn't the best years to appreciate anything. :)
posted by RJS on 22/7/2011 10:59