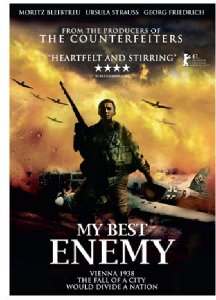 Just before the Second World War, as Nazi Germany sought to annex Austria through political allegiance and extend its grip across Europe, a secret is uncovered by the SS that could change the course of the war.

Hoping to secure the historical artifact at the centre of the controversy, the SS imprison the family involved and confiscate their possessions. However, when one of the victims is taken to Berlin for interrogation, a twist of fate throws him and his jailor into a battle between a renegade band of resistance militia and the enemy.

In an act to save his family, the prisoner now must make the desperate choice between acting in vengeance or laying his life on the line to defend his family and fight for his people.

Set in one of the most powerful World War II struggles, MY BEST ENEMY weaves a thrilling tale of the heroism of a few who sacrifice everything in the name of justice.


EXTRA FEATURES
A look behind the scenes of My Best Enemy