Article
Series 4 of Doc Martin out in March on DVD

Article
Apocalypse of the Dead out in March

The Horseman out on DVD and Blu-ray in March 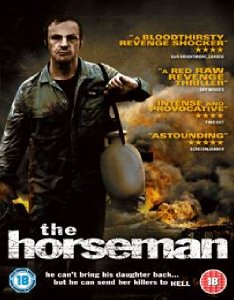 "Intense and provocative....a revenge thriller in the spirit of Peckinpah" ★★★★
TREVOR JOHNSTON, TIME OUT

Synopsis:
An action-packed, multi-award winning Australian thriller, The Horseman features a range of powerhouse performances in an unflinching study of grief & retribution. Explore the dark fantasies we all dream up when Christian (Peter Marshall) is sent a horrifying pornographic video featuring his recently deceased daughter.

Setting out to find answers, he soon spirals into a world of violence and recklessness as he follows the links through the industry with his unique methods of brutal questioning.

Driving through north Queensland to locate the final suspect, he reluctantly picks up Alice (Caroline Marohasy), an awkward young runaway and an unlikely bond develops. But as the crime is pieced together, an ugly truth is revealed that leads everyone down a dangerous path.