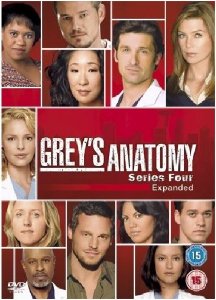 The season opens with Christina Yang (Sandra Oh) being dumped at the alter by Preston Burke (Isaiah Washington), while the show's protagonist, Meredith Grey (Ellen Pompeo) and her partner Derek Shepherd (Patrick Dempsey) face a will-they-won't-they merry-go-round as they try to sort out their commitment issues. George O'Malley (T.R.Knight) is pursued by new intern - Meredith's half sister Lexie Grey (Chyler Leigh) but her romantic advances for him go unrequited. Instead George only has eyes for Izzie Stevens (Katherine Heigl) with whom he embarks on a tumultuous affair.

Packed full of exclusive extras and bonus features Grey's Anatomy Season Four includes "New Docs on the Block," a look at the latest members of the cast; and an on set tour with Dempsey and Eric "McSteamy" Dane; extended scenes; and outtakes. Immerse yourself in the high octane drama of Seattle Grace Hospital.