Gary Glitter - Remember Me This Way
Not available

Article
Pedro out in July

Article
The Burrowers out in July

Article
Genova out in July

Hush out in July 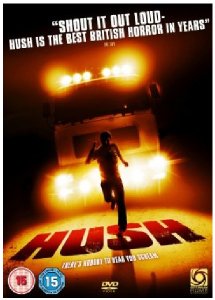 From the producers of
Donkey Punch & This is England

"A terrifying, tightly-wound British thriller...
Hush ratchets up the tension to fever pitch"
****
Robbie Collin, NEWS OF THE WORLD

It's dark and raining. You're driving home on the motorway. A truck overtakes you. Its shutters open for a split second and inside you see a caged woman screaming for help. What do you do? What should you do? You do nothing. You don't want to get involved. But what happens when the next victim is the person you love?

The debut feature by writer/director Mark Tonderai is a gripping psychological thriller that begins with an ordinary late-night drive home on the motorway and ends with a deadly game of cat and mouse.

Tired and irritable, Zakes (Will Ash) and Beth (Christine Bottomley) drive home along the M1, a familiar journey full of harshly lit service stations and bad coffee. When a white truck narrowly avoids hitting them, its back doors open to reveal a woman terrified and screaming caged up inside. Unsure if what he has seen is real, Zakes calls the police but drives on. Beth is furious that he hasn't done more to help and at the next petrol station storms off. When she doesn't return, Zakes slowly realises that she too has been snatched by the white truck driver and is forced into a vicious game of cat and mouse with a ruthless killer who has terrifying plans for his human cargo.