Article
The Burrowers out in July

Article
Genova out in July

Mumbai Calling out in July 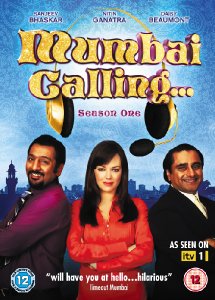 TV comedy favourite Sanjeev Bhaskar (TV's "Goodness Gracious Me", "The Kumars at No: 42") stars in the hilarious send up of the call centre industry, Mumbai Calling... Season One. Available on DVD for £19.99 RRP on the 13 July, 2009 courtesy of Sony Pictures Home Entertainment, this primetime ITV1 comedy is a real hoot.

The DVD features a host of extras, including an interview with Bhaskar and Ganatra and a Making Of, complete with outtakes, Bombay Bloopers, deleted scene and a tribute to Mumbai.

British born Indian Kenny Gupta (Sanjeev Bhaskar) is dispatched to Mumbai to turn around the fortunes of a call centre acquired in a take over deal. Things do not go to plan when Kenny is confronted by lothario manager Dev (Nitin Ganatra), who is more interested in his own profitable sidelines than the business.