DVD
Love in the Time of Cholera 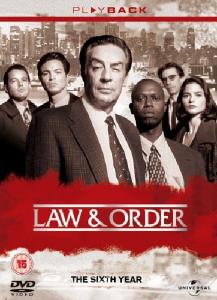 "In the criminal justice system, the people are represented by two separate yet equally important groups: the police, who investigate crime, and the district attorneys, who prosecute the offenders. These are their stories."

Justice will be served on the 16th February 2009 when Law & Order Season 6 is released onto DVD. Set in New York City, the series follows the professional lives of several police officers and prosecutors who represent the public interest in the criminal justice system. The longest running crime series, second longest-running drama series in the history of American broadcast television and winner of the 1997 Emmy® Award for Outstanding Drama Series; Law & Order is the most successful brand in the history of primetime television and has featured notable guest stars over the years including Julia Roberts, Samuel L. Jackson, Chevy Chase, Tom Berenger, Claire Danes and Philip Seymour Hoffman.

Highlights from this season include episodes 'Deceit' - When a young attorney is murdered shortly after he decides to file a sexual harassment claim against his employer, Briscoe and Curtis quickly discover that the alleged harasser and his wife each have an excellent motive for murder, 'Atonement' - The investigation into the murder of a model with a passion for cocaine and partying focuses on the men in her life -- a nightclub owner, a basketball player, a photographer and a limousine driver, 'Pro Se' The investigation into multiple homicides at a clothing store leads to the arrest of a schizophrenic who presents McCoy with a formidable opponent when he decides to represent himself, and Season finale 'Aftershock' - After Briscoe, Curtis, McCoy, and Kincaid witness the execution of a criminal they brought to justice, their unique reactions to the event culminate in personal tragedies for each of them.

This fantastic collection is for fans of the show and newcomers alike. Every nail-biting episode can be yours to own and analyse when Law & Order Season 6 is released on DVD on 16th February 2009.

Golden Globe® is the registered trademark of the Hollywood Foreign Press Association. Universal Pictures is independent from the Hollywood Press Office.