The New Year has arrived, and with it comes the snow. If you think that anime can keep you warm in the winter months, then you are sorely mistaken. But, you know what, let's have a go anyway.

The Last Ever Online Anime Update! Sort of…

2008 was the year that it finally became possible, even desirable to watch anime online for free, absolutely legally, as the companies realised that it's really just advertising for the DVDs, and if you can't get anime on TV, this is the next best thing. But it was a slow start, and it was with an ever-increasing eagerness that I pointed out which new shows were coming and where to get them.

2009 is the year that I'm going to stop doing that. There is simply just too much anime online now, free and legal, for me to keep track of it all. Crunchyroll began the year by taking down all of the user-submitted content, all the fansubs, and all the content that may have got it in trouble with the holders of the copyrights. On the other hand, they also began the year by launching around a hundred legal titles to stream and download. Top of the bill is Naruto Shippuden, which you can go there and watch now, or at Naruto.com if you live in the US, and they'll be releasing eight episodes a week until they catch up with the Japanese broadcasts.

Fortunately where I lack the stamina, there are people who catalogue and link to all the freegal anime available, even pointing out which shows are region locked and which aren't. Crunchyroll have posted their extensive winter schedule, while the folks at the AnimeonDVD forums also keep an eye on Crunchyroll, and the online anime world in general. UK Anime Net have a list of Crunchyroll titles for the UK only, although it isn't comprehensive. I must admit, that of late I have had a lot more anime satisfaction from the Funimation video portal, with their higher quality streams and extensive range of titles to watch. Also, none of them are region locked.

Click any of the links to find free and legal anime online, although for the most detail, I recommend the AnimeonDVD links. I'll still be pointing out the must see titles though, like the upcoming Sword of Uruk and Shikabane Hime Kuro, so it isn't a total online anime blackout from me. 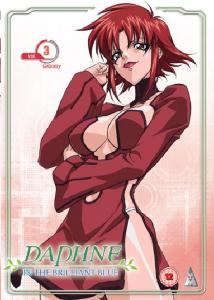 I did post the occasional anime review over the Christmas holiday, and just to get you caught up here's a brief recap, beginning with Daphne In The Brilliant Blue: Volume 3. MVM are practically zipping through this series, taking us to the halfway point in just a couple of months. Who can blame them? Daphne is the textbook definition of style over substance, and the style isn't all that spectacular either. This third volume offers more lightweight Charlie's Angels type action, set in a future waterworld. If you like your heroines in the skimpiest of outfits, performing acrobatic feats, then this one is for you. 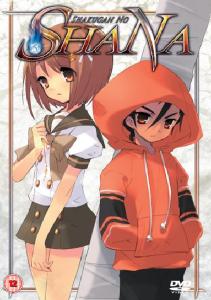 It's that time of year in the anime schedules that existing series come to a conclusion, and new titles make their debut. Shana: Volume 5 is where the supernatural action romance gets penultimate, at least in terms of its first series. No idea yet if the OVA is coming to the UK, or indeed if the movie or the second series will even get to the US, but that isn't really worth bothering about, as Shakugan no Shana has delivered a solid and entertaining story with plenty of action, comedy, drama and romance over its first five volumes. Find out more by clicking the link. 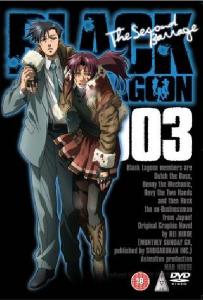 It's like a kick in the gut when a favoured series ends. And the disappointment that comes with the final volume of Black Lagoon's Second Barrage is greater than usual. This has been for me the UK series of the year, the one show that I drop everything else for just to savour its exquisite serving of eighties action. All good things do come to an end though, and Black Lagoon's ending is suitably explosive. The only glimmer of hope that is stopping me from bursting into tears, is the announcement earlier this year that a third series will be made. 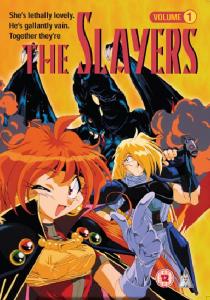 For every end, there is a beginning. It was nonsense like that that made me want to stab myself in the ears watching The Matrix Revolutions. But it is true when it comes to anime, and as MVM close off one series, they start another, a big one, one that UK fans have been waiting for now, for up to a decade. The Slayers have finally come to the UK, and we can join Lina Inverse and Gourry Gabriev as they venture forth on a comedy RPG adventure, tongues firmly in cheek, and pointedly refusing to take anything seriously, including the script. This first volume comes with a bumper six episodes, and it's well worth a look see. 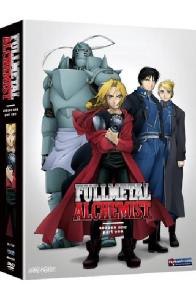 Finally, just before I got around to typing this column, Stuart McLean came forth with his review of Fullmetal Alchemist: Season One - Part One. I love Fullmetal Alchemist, and you can see that love gush forth in 15 separate reviews on this site. But Revelation have found first gear again, and are starting off the New Year with the release of the first Fullmetal Alchemist Collection. The first half of the first series, four discs worth are put together in a nice shiny boxset, and are available at a truly convenient price. Now you have even less of an excuse to deprive yourself of this fine series. It turns out that the Japanese love Fullmetal Alchemist too, so much so that they are making the series over again from scratch, this time staying faithful to the manga. Read Stuart's concise and informative review of the nice shiny convenient boxset, in which he manages to summarise my rambling and voluminous feelings for this show in the space of a few well-constructed paragraphs… Now that's alchemy!


The first DVD release day of the year, and you can already pocket some new anime. Daphne In The Brilliant Blue, Shana, Black Lagoon, and Slayers are all released by MVM today. You'll have to wait until the 19th of January for the first Fullmetal Alchemist collection from Revelation.