Help, Help! They're depriving me of my luxuries!

It's the pre Christmas slowdown. It happens every year, as companies put the brakes on after a summer glut of anime, reassess and re-evaluate their circumstances, as well as tweak their schedules a tad to set up the Christmas season. Last week had Revelation announce that their anime releases were on pause for the rest of the year, and a tentative listing on Amazon for Mushi-shi Volume 6 on February 16th 2009 may just be a shot in the dark for the e-tailer, or it may be a genuine indication of how long we have to wait… Certainly not as alarming, more in the category of petty annoyances is the delay of MVM's September releases. They had already been put back a week, but now Black Lagoon: Second Barrage: Volume 1, and Shana: Volume 3 will come out on the 22nd of September, while Starship Operators: Volume 1 will come out on the 29th. The thing to note is that their October releases, including Starship Operators: Volume 2 were, and at the time of writing still are, scheduled for October 6th. But I wouldn't be at all surprised if there is a knock on effect on the release dates. In other news…

Does Gatchaman get you excited? Apart from those fans in the know, probably not. But if I mention G-Force or Battle of the Planets, then a golden haze of nostalgia will be guaranteed to descend across most rose tinted spectacles. Gatchaman was the original Japanese anime. Battle of the Planets is what we got after the violence had been gutted out, and a nice PC message inserted in its place. What's astounding is that it still worked, as children we were enthralled by the adventures of the crew of the Phoenix, as they battled the evil Zoltar. I did have an opportunity to see an old episode a while back and it hasn't dated well at all. Well by golly, it's time for a remake, and the Gatchaman feature film is in production by Imagi. AnimeOnDVD have the teaser trailer, and a link to some production stills, and the CG animation looks impressive indeed (the new look Phoenix actually made me whimper). Best of all, there's no 7-Zark-7!

For the past few months, the Urbis in Manchester has been running a "How Manga Took Over The World" exhibition, with regular events and screenings. It all ends this month, and to mark the finale, there is a screening of three anime feature films to round things off. There's seating for about 100, and all you have to do is turn up. It's free! It all happens on Saturday the 20th of September 2008 from 11am, and you'll be able to watch Princess Mononoke and Steamboy. For the third film, you're invited to head over to their site and vote for either Barefoot Gen, X, or Laputa.

Funimation keep adding to the anime that is freely available for all to watch over at their Youtube site. At this moment in time, you can watch from the following selection…

That's two complete series, and in total about 50 hours of anime. As always, it's a great way to try before you buy, especially in a country where televised anime is almost non-existent. (The faltering Anime Central satellite channel, which for the last few months had been endlessly replaying Ghost In The Shell and Cowboy Bebop, vanished from the airwaves recently, ending a brief televised renaissance for the medium in the UK). It's also a decent way to watch those series like Slayers and Blue Gender that have passed their DVD sell by dates (Slayers Next starts on Youtube next week). However, it's worth noting that four of the titles here are relatively new, and that Revelation have just put Suzuka, Mushi-shi and Peach Girl on hiatus. In the next few weeks, you'll be able to see the dub versions of these shows conclude on Youtube while the DVDs are stalled in the UK. I think it's a case of Funimation's right hand being unaware of what the left is doing. 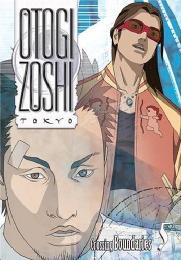 That anime slowdown I was talking about hits the reviews, and there were only two titles that got a good seeing to last week. I got tired of whinging about dubtitles and cut-down releases, and got around to doing the sensible thing and just imported the correct versions. Otogi Zoshi's second half was my primary whinge, and a couple of weeks ago, I tackled the US version of volume 4. Last Tuesday I got to enjoy Volume 5, and quite logically, I polished things off with Volume 6 on Saturday. It's a supernatural mystery show that has its second half set in modern day Tokyo, and while the UK versions were dubtitled, single disc affairs, the US releases had a second extras disc with each volume, as well as proper subtitles. And I have never been happier with a double dip… 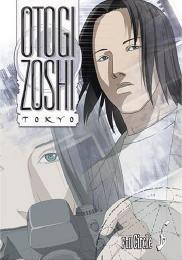 Otogi Zoshi has been available for years in Region 1 land from Media Blasters and Anime Works. But it turns out to be good timing for these reviews, and serendipitous if you are considering this series, as Media Blasters are now bringing out the boxsets. Manga Entertainment's first half of the season was almost identical to the US releases, except that there was no separate signs track with the episodes, just a translated subtitle track, and for the first two volumes they managed to cram everything onto a single disc, whereas the US releases were on two apiece. But, the Heian Arc of Otogi Zoshi is released in a six-disc boxset tomorrow in the US, and can be had for around 15 pounds from DVD Pacific. The six-disc Tokyo Arc will be released on the 14th of October at the same price, and they are well worth the import. And that's it for this week.


Next week, the slowdown continues…