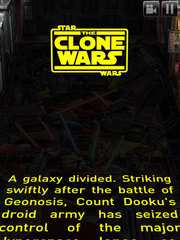 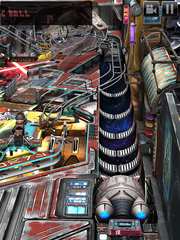 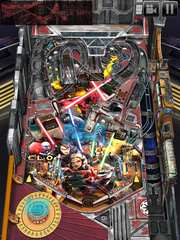 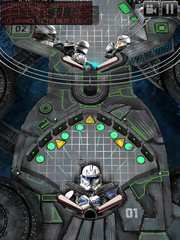 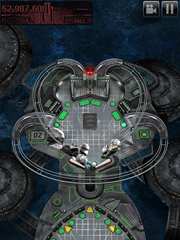 Following on from last week's review of the Star Wars Bobba Fett table, one I really wasn't a big fan of, today I'm going to share my views on another of the trio, Clone Wars. This time things are much better, and there is way more to love here. As usual, the same get-over-100-million-or-don't-review-it law applies, and achieving this goal was good fun. 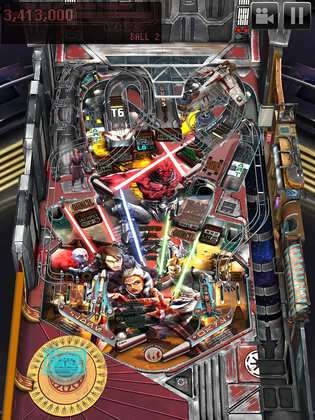 Somewhere between the first prequel and the original Episode IV movies, lies The Clone Wars. Actually it probably lies all over the place between those spots, I couldn't really tell you having never seen it. All I know is it's a cartoon series set in the same universe, covering all sorts of things not worth making a movie about.

As of the time of writing, there have been five series and counting, all of which I know nothing about. But from playing this table I think I can have a good guess that it involves a lot of light sabers, Darth Maul's less famous brother, and an over active Yoda. 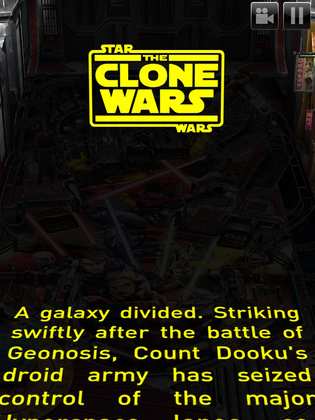 Anyway, of all the Zen tables this one is up there with the cannot-be-recreated-in-real-life brigade. Whilst the basics are all genuine physics based proper table style affairs, a few of the missions, at least one hurry up mode and a second training table all would be impossible on the real thing.

A lively table this, with lots to aim at and quite a few flippers. The rollovers by the flippers give you the kickbacks, bumpers up the top are near the rollovers which increase the multiplier, and the bumpers will give you a ball save eventually. Ramps are all over the place, and some are best hit with the upper flippers. Two very hard sink holes exist, with a much easier one below a jump ramp.

No less than three types of skill-shot are available from the ball launcher, a mini easy one, a much harder one involving a ramp and the top left flipper, then a really hard one involving the same flipper and a sink hole. Only made that last one... once. 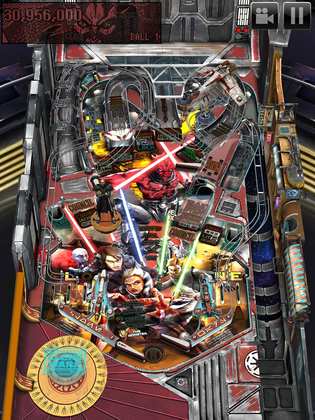 Three targets give you a random award once hit, which can include all sorts of things from an extra ball to kickbacks. Combos are earned by hitting various ramp combinations, good way to get points this.

There are three main hurry up modes, the first is the Gunship hurry up which you get from lighting each letter on the Gunship ramp. Once starting this mode it diverts that ramp back to the right flipper endlessly until the mode is over. You have about 30 seconds to keep chain hitting this ramp which increases the hurry up score, that you can collect at anytime afterwards from either of the two main sink holes.

To add a layer of irritation, even after the 30 seconds passes the Gunship ramp still diverts to that same flipper, but you get no more increase in bonus. The only way to stop it is hit the sink hole to collect.

Another major hurry up is the Liberation ramp, which is charged up by a bar every hit, and once started a countdown from 8 million points begins. Every time you hit that ramp until this runs out, you get the number on the score card. This is a great way to rack up points, but equally frustrating when you can't get the ball back up to the top left flipper, as that is the only way to reach this ramp. 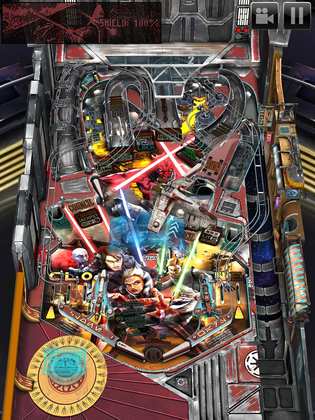 The last hurry up is the Point Rain, hitting the appropriate sink hole 5 times makes the ship that hovers over the bumpers land by a jump ramp down the bottom of the playfield. You have to get a ball into this Gunship, then hit various ramps within a timer or the ship gets hit. Three hits ends the hurry up, but three ramp hits rescues your troopers and begins the mode again. Another way to rack up points this, but only if you can hit the three ramps consistently, otherwise the shield on the ship gets worn down and it's hurry up over.

Multiballs have jackpot lanes, and range from the gentle T-6 Multiball to the mad Clone Multiball which can sometimes be triggered at the same time. That's a lot of balls running around to control, and the biggest challenge of the whole multiball modes is the upper flippers. You can't hit ramps easily when they are up, and you can't hold balls safely on the flippers below when they are down. It's a catch 22! Who ever said pinball was easy?

Training mode involves hitting the main orbits to spell out the word... yes you guessed it... Training. Then you can hit the centre ramp and take a visit to the first of two upper playfields. Here you hit targets then advance to the second upper playfield where you have to hit ramps. Finishing all the ramps increases your rank and does something to do with a wizard score mode, which I don't quite understand having not managed it yet. I've got close though. 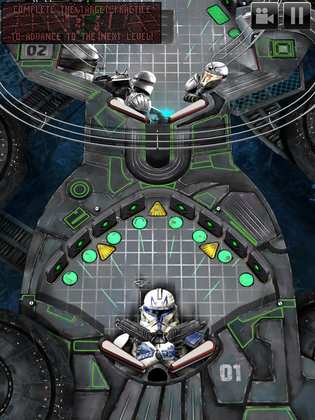 The Council ramps spell out... yes Council, and then hitting the sink hole lets you select a mission. These range from a three part bombing mission where you must send the ball round the outside of the pink dome (it's solid if you try directly) and then hit ramps inside of it. To hitting Darth Maul's brother who appears to be dressed up like a Subbuteo player, then hitting ramps. Some are timed affairs, others you can go at until you lose the ball in a drain.

What can I say, this is a very attractive fun big table. The ball moves fast but the table is big, so it all balances out nicely. It's bright, colourful, and the use of light sabers to show the ramp directions is a nice touch. The 3D models are fun, visually there isn't much to fault.

Audio wise is a mixed bag, actually no, it's way more than that. The music is good, the sound effects are great, the TV announcer style guy is good, in fact everything is great apart from one thing. Bloody Yoda, you can't shut him up, and this isn't the cool Yoda we all love from the original trilogy, oh no. This is the really annoying bad self parody that turned up in the prequels.

If he could speak less that would be great, if Zen would add an option to mute him, that would be even better. I could quote you some of the memorable things he says in the game, but none of them are memorable. They are all just irritating.

This is a very well balanced table, it's medium paced and a lot of fun. There are many ways to make a score, and a few gotchas you need to be careful of to avoid not getting a score. It's not as good as the Episode IV table, but a pretty close second. The missions are fun, the Training tables are hard but like all good tables, everything here makes you feel if you just did X or Y you'd not have lost it there.

A table that feels fair is rare, I like one that does but still punishes you for being careless, and this one feels like all of that. 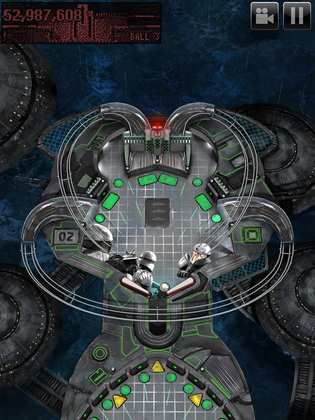 There is one minor complaint tho, and that is the Ball Save mechanic is a bit buggy, sometimes it will somehow hit the flippers whilst trying to bring the ball back into play and instantly drain it. That is harsh enough when it happens during multiballs, which is when it tends to happen most. But it also sometimes happens outside of that, which is very frustrating when it does.

Still don't let that put you off, this is a great table and one I can heartily recommend.

If only we could shut Yoda up.