last post by RJS
So... what are you playing just now?

last post by RJS
short films that are WWAW

Review
Review for The Incredible Hulk

that was better, an actual proper good episode :)

Quote:
admars says...
"that was better, an actual proper good episode :)"
I was thinking the opposite! ☹️

Quote:
RJS says...
"I was thinking the opposite!"
I'm afraid I'm with you on this.

They seem to have missed the mark completely with this series.

I don't know if it's just me, but with a couple of exceptions (Rogue One, Force Awakens), each subsequent addition to the Star Wars franchise just seems to make things worse.

I liked the way we got back story on Reva, and although young Ani looked a bit wierd, I liked that part of the back story, and more about Obi Wan is still coming to terms with things.
SPOILER:

having Reva fight Vader was great, rather than Obi Wan which would have been too obviousmaybe it helps if you've seen Rebels, and know about Inquisitors?
SPOILER:

there had been speculation the grand inquisitor would be back, as he's in Rebels, so couldn't be dead, I had just assumed it was another one, rather than same.

I think I just found the overall story pointless and unnecessary, adding nothing to the lore, actually making some parts of the lore make less sense.

But if Reva gets a spin-off series, or they do a second series where Obi-Wan and Reva run around the galaxy, I'd forgive them everything.

Quote:
RJS says...
"Watched the finale... meh."
As much as I hate to admit it you're right :( But as I said before, I think part of that is the problem of prequels, you watching something, thinking "well, I know what must happen, and what can't happen" :(

Quote:
RJS says...
"adding nothing to the lore, actually making some parts of the lore make less sense."
yeh, they should have got Dave Feloni involved, he is such a massive fanboy, he made sure Clone Wars, Rebels, and Mandalorian expanded, and explained and never contradicted what was already canon.

maybe Luke bumped his head pretty hard and suffered from amnesia, forgetting the events in this episode, or we'll see in series 2 him get hooked on spice so can't remember his childhood/isn't sure what was real or not?

SPOILER:
I liked her, so was glad that she made the right decision, rather it being forced (no pun intended) )

Obi Wan far too mannered, more elocution than acting. Possibly unfair to Ewan McGregor as it appeared that was what was required of him.

Still think Leia was miscast though she improved slightly in the last episode though that was probably because there wasn't much in the way of physical action required.

Moses Ingram a definite plus but I think the script let her down.

SPOILER:
Vader can throw giant piles of rocks on Obi-Wan, drag a ship to the ground but can't cross 10m of fire to get Obi-Wan

Vader lets Reva live, I mean okay if she is so insignificant to him fine, but he was executing her earlier just for being supposedly bad at her job. Not even an implication why he leaves her alive when that's so not his style

Obi-Wan getting his full powers back in about 30 seconds, okay so this was also the time it took Anakin to turn to the darkside in Ep III, but where is the journey? If it was that easy why not get them back on the other planet before rebels died?

Leia is not going to forget Obi-Wan after that experience aged 10, so that never got explained

Darth was too well formed, basically behaving exactly like A New Hope Darth but skill wise no match for Obi-Wan. At least we know how he gets that scar now. Breaks continuity with IV though because when he left Obi he was but the learner, don't believe this Darth would consider himself that

If Reva knows where Luke is, and who he is, why doesn't Vader?

Obi-Wan got to Tatooine a bit quick didn't he? I guess the timeline works out, but just such a messy addition to the episode when we all know he lives
It's not that these holes exists that bothers me, it's how in all the other shows they've been so careful to maintain continuity, but here they just couldn't be bothered. 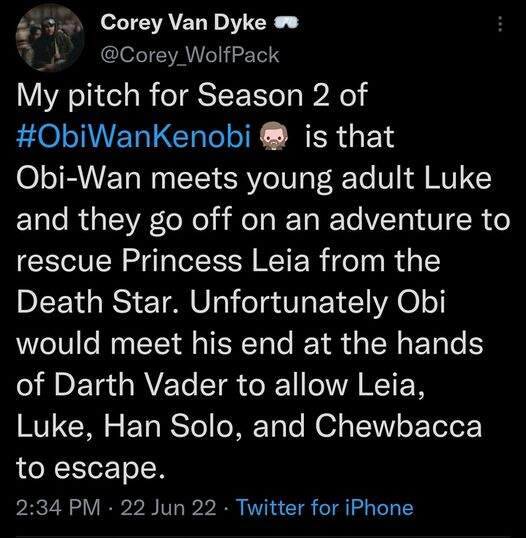