Starting where we left off.

Two trophies since starting in December in our worst season for years.
Reasonable target for the coming season I reckon is top four and at least the semis of the Europa League.
Domestic cups give the young ones more of a run out.

EDIT: How cool was Ainsley's penalty. I'll be sad if he goes and if he does I think it's more driven by him than Arsenal as I think Arteta would like him to stay.

Top of the league!!! 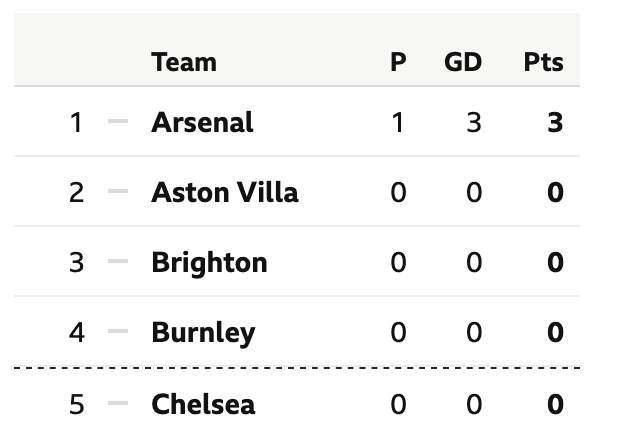 I'm not sure the alphabet counts...

I do think we're capable of a bit more than most pundits think, which is outside the top four and probably sixth to eighth
The only two differing were Ian Wright, obviously, who predicts fourth and Micah Richards who reckons third.
My own opinion is that the Arteta factor will have us closer to those two than everyone else's 6th to 8th.

I see the neighbours tripped at the starting line.
Looks like Amazon's sequel could be 'Nothing Again' or 'Mourin No'

Quote:
Snaps says...
"I do think we're capable of a bit more than most pundits think, which is outside the top four and probably sixth to eighth"
I agree, I think we have a very realistic chance of being inside the top four this season, and a very big chance of St Totteringhams Day returning.

As long as Abameyang signs.

We have made some very good purchases, we have a good manager that the players believe in, and I think this season will be a lot more about squad depth than previous ones.


I mean, clearly the money helped, but he is one of the best strikers in the world, and him staying says a lot about Mikel, but he also talks about wanting to be legendary at the club.

I think when you look at legendary players, they generally make their names at one club where they stick around. Ones that are trophy hunting don't.
Also, he's such a nice guy!