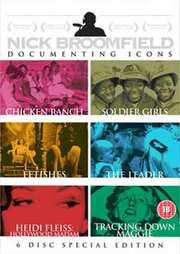 Synopsis:
Six provocative documentaries from Nick Broomfield: Soldier Girls (1981), Chicken Ranch (1983), The Leader, The Driver And The Driver`s Wife (1991), Tracking Down Maggie (1994), Heidi Fleiss: Hollywood Madam (1995) and Fetishes (1996).
Nick Broomfield is Britain`s most acclaimed documentary filmmaker, attracting huge cinema and TV audiences for his work. His investigations into the US sex trade and his hounding of such formidable characters as Maggie Thatcher and the Afrikaner neo-Nazi leader Eugene Terre Blanche have earned international praise and a peerless reputation for investigative filmmaking.

This collection comprises of Broomfield`s three classic sex documentaries: Chicken Ranch, Heidi Fleiss: Hollywood Madam, and Fetishes. Plus Soldier Girls (following US Army recruits as they go through basic training), The Leader His Driver And The Driver`s Wife, and the infamous Tracking Down Maggie.

Chicken Ranch (1983): Chronicles the action in a legalised brothel 50 miles outside of Las Vegas. It`s fifteen girls live in large trailers and the majority of the customers fly in on the brothels own plane. Broomfield records the lives of the colourful characters working and `visiting` the Chicken Ranch.

Heidi Fleiss: Hollywood Madam (1995): Broomfield pursues famed Hollywood Madam, Heidi Fleiss for an elusive interview. In the process he uncovers her previous existence and a wild lifestyle. Along the way he meets a bizarre group of associates including Ivan Nagy, a producer and supposedly former boyfriend who has a Svengali- like hold over Heidi. We also meet Madam Alex, her money guzzling mentor, and Victoria Sellers, daughter of Peter Sellars.

Fetishes (1996): Filmed at Pandora`s Box, an S & M parlour in New York, Fetishes reveal in both a humorous and informative manner the full range of fetishes, from rubber and infantilism to asphyxiation and mummification. Clients pay upwards of $10,000 per night to submit to a mistress who creates a highly elaborate role - playing scenarios designed to meet her clients specific needs. Meet Mistresses Natasha, Catherine, and Delilah and especially Raven, the founder of Pandora`s Box, who says Mr Broomfield needs discipline and the use of lots of restraints!

Soldier Girls (1981): Nick Broomfield travels to Fort Georgia where he follows the lives of a number of inductees as they go though Basic Army training. It soon becomes apparent some are far less suited to this rigorous lifestyle than others and in a fashion honed over several subsequent films Broomfield zeroes in on only the most interesting, funny, sad and strange figures there. Including those in charge!

The Leader, His Driver And The Driver`s Wife (1991): The film portrays both the comic and sinister sides of the white supremacist, Eugene Terre Blanche, known as The Leader and the followers of his AWB (Afrikaner Party) in South Africa. Broomfield follows The Leader as he addresses rallies whipping up white hostility towards the policies of F.W de Clerk and the ANC leader Nelson Mandela. He pursues The Leader for the elusive interview, which he finally gains with frightening and comical results.

Tracking Down Maggie (1994): Broomfield brings a humorous and revealing look into the political and private worlds of former British Prime Minister, Lady Margaret Thatcher to the screen. Both Lady Thatcher and those responsible for her day-to-day affairs refuse to cooperate and grant Bloomfield an interview. Bloomfield is drawn into a complex web of intrigue surrounding not only Lady Thatcher but also members of her family. However, by consistently refusing to grant Bloomfield an interview, Lady Thatcher inadvertently aids the production of the film.