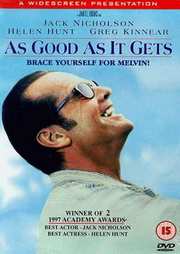 Synopsis:
Oscar winners Jack Nicholson and Helen Hunt star alongside Greg Kinnear and Cuba Gooding Jr. in this smash hit comedy. Nicholson gives a show-stopping performance as Melvin Udall, an obsessive-compulsive novelist who takes pride in his ability to affront, repulse, offend and wound. His targets are random, his aim reckless. But when neighbour Simon (Kinnera) is hospitalised, Melvin is forced to babysit Simon`s dog. And that unexpected act of kindness - along with waitress Carol Connelly (Hunt) - helps put Melvin back in the human race...

MOVIE
It won a few Oscars, but it just seemed to pass me by, until I got the chance to pick it up because I got it free with This is Spinal Tap. I`m glad I did. This is one of the best funny and heartwarming films I have seen in a long time. The movie centres on the life of Melvin Udall (Nicholson) a novelist who is an obsessive compulsive, who must do the same thing every day. He is possibly the most repulsive man ever, who is horrible to everyone and can`t help but offend. But when his odd life is disrupted when he has to care for his neighbours dog, something changes him, and the rest of the film follows this, with the help of his neighbour and a waitress from the cafe he visits everyday, unless he is thrown out. The cast are brilliant in this film, with Nicholson and Hunt standout, but even the supporting cast are great. The direction isn`t over the top or flashy, nor does it need to be, but it is the script, the very witty script that makes this film the wonder that it is. At points it is quite cringeworthy to watch, but by the end it is one of those feelgood movies.

VIDEO
This was quite an early DVD release and as a result, the picture certainly isn`t the best you will ever see. Maybe it is because of the low key setting of the film, but this isn`t going to be reference quality. Having said that, everything is clear and clean, it`s just the picture is slightly soft.

AUDIO
It`s mostly dialogue based, so it doesn`t need 5.1, but it is provided, and it is pretty good. Everything is clear and there is some use of surround.

EXTRAS
Not a lot, as it was an early release. The box states there are interactive menus. This term has become quite a grey area, as I always feel interactive menus are the lovely 3D ones that give a video link or some flashy effect to get from menu to menu, but the only interactive feature is you click on one title on the bland menu, and it takes you to another one. Still, the extras that are included are a director and cast commentary. Yes, Jack is on here, as well as James L Brooks and Greg Kinear. It is a very good commentary, with a few pauses though. It is very good with lots of good annecdotes. It is a worthwhile extra. The only other extras are some filmographies and a trailer. But the commentary is very good.
posted by cartoonjonah on 13/6/2003 15:29