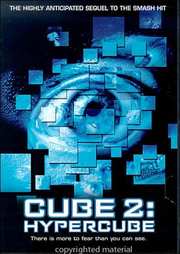 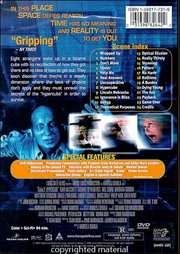 DVD
Third Miracle, The (US)

DVD
Roger & Me (US)
Related Articles

In 1997 a fantastic budget sci-fi / thriller film called Cube came out that had one of the most intriguing premises I have ever heard of: six strangers wake up in a giant booby-trapped cube with a seemingly countless number of rooms, and in order to get out they must combine each of their unique talents. A simple yet original idea – all that is needed to become a sleeper hit, just as The Blair Witch Project showed. And The Blair Witch Project is a good comparison to Cube, as they each had a seemingly unnecessary sequel made to cash in on the success of the original, with few collaborators on the first film involved.

The plot of Cube 2: Hypercube is similar to the first film, but this time there are eight captives in this ‘Hypercube`, a 4-dimensional version of a 3-dimensional cube. Again they must band together to get out of this prison, but this time they do not only face traps but also a number of rooms where the laws of physics seem to be broken and anything can happen.

The transfer of Hypercube is pretty perfect: there is no artifacts, print flaws or film grain. When they appear, the colours are solid – most of the set design is minimalistic white. The image contains a high level of detail and is presented in anamorphic format.

The sound is 5.1 DD and is very good by all accounts. The surround effects are done very nicely – one particular scene with a spinning booby trap stands out. The LFEs are also used plenty.

Considering the film was released straight to video and DVD, this disc is fairly loaded, with a commentary and a couple of substantial documentaries.

The ‘director’s commentary’ does not in fact contain any commentary by the director but instead is by Ernie Barbarash, the co-writer and producer, and Mark Sanders, the editor. Much like the commentary that was on the first incarnation of the Cube DVD, the commentary is very technical and doesn’t go into much detail about the themes discussed in Hypercube, which is disappointing as a lot of the film is left unexplained. The pair do discuss the special effects and making of the film however, and never leave a gap in the commentary, so it is worth a listen to.

The first documentary, The Making of the Cube, is quite a long documentary at over half an hour and contains a lot on creating the CGI special effects for the film, which I found to be quite entertaining. The second Green Screen Effects piece seems to be a B-Roll showing some of the scenes before the removal of the green screen and the addition of the CGI, and is a little dull, but does contain a substantially longer alternate ending as a bonus.

Two TV spots round off a satisfying bunch of extras.

Whilst Cube was a fantastic piece of budget filmmaking whose flaws – such as hammy acting and stilted dialogue – can be forgiven by its having such an exciting premise, the bigger budgeted sequel`s can not. Not only is Hypercube a blatant rip-off that is an insult to Cube’s originality, but it cannot even stand alone as a film. There are numerous illogical plot twists, and unlike the logic of the first film the booby traps seem to have been put in at random in arbitrary situations (in the commentary the writer says many times something was put in the film because it would be "fun", instead of logical). The characters are all the same types as in the first film, and the acting is similarly as bad. The premise takes ludicrous liberties with theoretic physics. And to cap it all off, the ending is completely ridiculous and ultimately frustrating.

It’s always a shame when there is an unnecessary return to a film to which a sequel should never have been made; if you do not want to spoil the sheer brilliance of the first Cube then please avoid this mess of a movie.