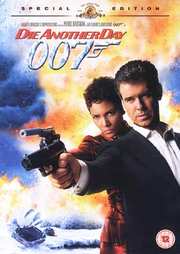 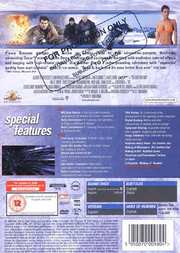 Back Cover of Die Another Day: Special Edition (James Bond)

Bond is back, for the 20th time in 40 years - with the popularity of the series on the up again after 3 good efforts with Pierce Brosnan inside the tuxedo and gadget filled car. The world is about to be shaken (not stirred) one more time, with our hero trying to save us from the evil villains again.

We start out with another long pre-title sequence segment, packed full of action and stunts, but then things take a turn, as Bond is taken prisoner and held for a long time, being tortured along the way. Things take a turn, a la Licence to Kill as Bond is returned to the British, but is now considered damaged goods and not fit for 00 status. However, he manages to get back on the case and we`re off to save the world again.

As ever, a big cast turn up to help out - Dame Judi Dench, John Cleese (the new Q as Desmond Llewellyn has sadly passed on), Halle Berry, Michael Madsen and Rosamund Pike are just some of those on screen.

A quick note - the US version of the film was cut slightly - they removed some parts of the love scenes (but none of the violence). 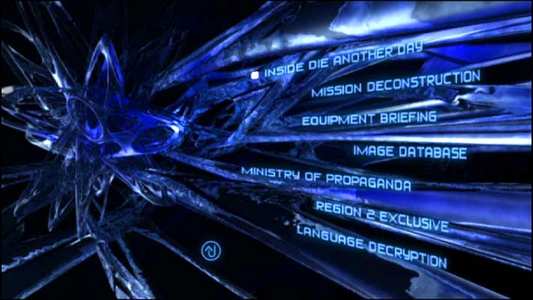 We are offered an excellent 2.35:1 anamorphic transfer, and you would expect no less from something shot just last year. The usual combination of exotic locations and Pinewood sets offer plenty for the eye. There`s been a lot of digital grading on the film - the early shots in North Korea look very desaturated, lots of colour removed, and then when we move to different locations things start to look more colourful. My favourite set is the "secret disused underground station" (a fictitious station called Vauxhall Cross) - although this was built on a sound stage you want to believe that it really exists, like those other ghost stations such as Down Street.

Lots of special effects and explosions boost the on-screen action - combinations of model shots and real things being blown up, film being slowed down and sped up Matrix style, and computer generated backgrounds and foregrounds. But sometimes the combinations don`t work - some of the blue/green screen work looks like the dodgy back projection of the Bond films of old - surely that wasn`t an intentional "nod" to the previous films as Lee Tamahori calls them.

Because there are lots of intentional visual nods to other films in the series, the obvious one being Halle Berry`s entrance in the Ursula Andress style, but all around the film you`ll find nods to From Russia With Love, Thunderball, Diamonds are Forever and Goldfinger to name but a few.

For the first time, the title sequence has been integrated into the film, and this breaks the Bond formula, and it`s probably the worse for it - it`s had a lot of time and effort spent on it, but it doesn`t really work as well as a typical Bond title sequence. 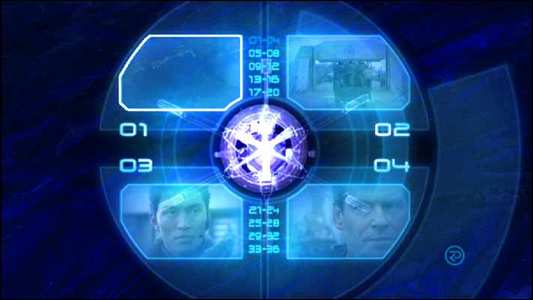 A choice of DD EX 6.1 and dts es soundtracks which are both excellent. For me the dts es soundtrack shaded it. As you would expect with an action film like any Bond film, there`s plenty of action for the speakers to deal with - the obligatory explosions (lots of bass), helicopters and planes flying around and gunshots pinging about the soundstage.

We also get another excellent score by David Arnold, whose style works well with Bond films. Unfortunately, after having one of the best title songs ever on The World is Not Enough, we get Madonna`s rather poor Die Another Day, complete with annoying vocoder style vocals. In my book it`s one of the worst Bond title songs I`ve heard. The Dirty Vegas remix used over the end credits (and during an Ice Palace scene) is slightly better though. 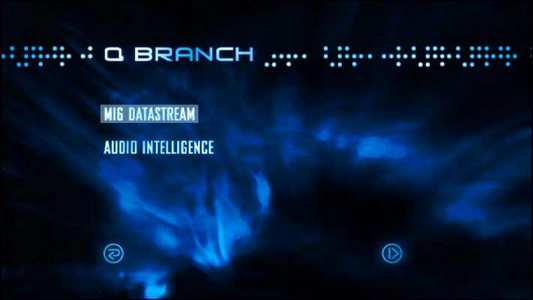 For the first time in the Bond DVD series we get a 2 disc set - and it is stuffed with extras. Let`s start out on disc 1:-

Audio Commentary with director Lee Tamahori and producer Michael G. Wilson - this is pretty much your standard Bond producer/director commentary track. It`s very interesting to listen to, plenty of information about how the film came together, all the visual nods to earlier films (and even a brief sequence re-used from Tomorrow Never Dies), bits that were cut, allusions to deleted scenes, and some bits and pieces that you might have missed on the screen. It does a strange jump twice during the film - Tamahori swaps speakers whilst talking and it sounds like he`s been overdubbed at that point - very odd.

Audio Commentary with Pierce Brosnan and Rosamund Pike - Brosnan commentates for the first part of the film, Pike joins in after about 50 minutes (both parts were recorded separately though). This does make it sound a little disjointed at times. Whilst Brosnan is quite funny and tells us some interesting things, there are some huge gaps in the first 50 minutes when he says nothing at all. This is one of the most annoying thing about commentary tracks, and this one has a lot of it until Rosamund Pike`s comments are mixed in after 50 minutes. There are also some gaps when they are "together".

MI6 Datastream - a combination of an on screen trivia track (seen mostly (by me) on Dr Who DVDs), but presented in the style of VH1`s Pop Up Video, and a Matrix style "follow the white rabbit", which allows you to access behind the scenes featurettes and interviews - this works very well indeed. You don`t actually click to access them - they take over the main part of the screen automatically - very nice. They last for about 20 minutes in total, and the main feature continues in the background.

Moving on to disc 2, we start out with Inside Die Another Day, which runs for 77 minutes. This is divided up into different chunks concentrating on different parts of the film, but you can watch them altogether. There`s plenty of behind the scenes information, interviews with the main protagonists and lots of interesting insights.

Also under this menu heading is Shaken Not Stirred On Ice - a documentary focussing on the car chase scene, and a lot of which you may have seen on TV in the lead up to the cinema release of the film. There`s some repetition from elsewhere on the disc, but it`s still worth watching to see how they messed with 2 great cars to film the sequence.

From Script To Screen is a Region 2 exclusive documentary, and this tells the story of the film in chronological order, focussing largely on things that happened during the making of the film. Again there`s a little repetition, but this is very interesting and worth watching.

We also have some smaller features on different sequences in the film :- Evolution Of A Scene has multi-angle sequences comparing the storyboard to the finished article for 2 of the big sequences in the film. Inter-Action Sequences also features multiple angles of various scenes in the film. These sequences contain some raw footage and even clips that might be considered out-takes. Equipment Briefing is a series of 5 clips about gadgets and weapons from the film (bit of product placement here).

The Image database contains plenty of stills from posters to locations, stunts to stars. You`ll also find an easter egg which gives you access to more of Halle Berry in there. Title Design focuses on how the titles (that I didn`t like, and Pierce Brosnan agrees with me a bit in his commentary) were put together. Digital Grading focuses on the way certain shots have been altered to fit the look required by the director.

The Ministry of Propaganda contains 2 teaser trailers, theatrical trailer, TV spots, the trailer for the James Bond Special Edition DVD collection, the music video for Madonna`s title song, a making of that video (the usual MTV making of fluff), as well as a trailer for the 007: Nightfire game, and a brief making of for the game.

Once again we miss out on deleted scenes - they are discussed in various places but we never get to see any of them (including an alternate ending that is mentioned in the commentary).

For those of you with all the other Bond DVDs in your collection, you`ll be pleased to know that this one has a reversible cover, so it will blend in nicely on the shelf. Thanks to roving reporter Chris Cox for the confirmation on that one. 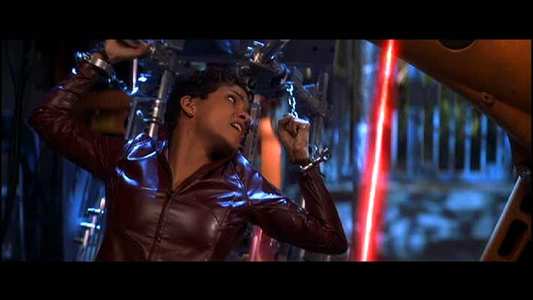 As with The World is Not Enough before it, the film is somewhat of a mixed bag. Bits of it work, but so much of it doesn`t. It seems like it`s trying to be The Matrix, and forgets that it`s supposed to be a Bond film. The plot itself seems ok overall, but so many individual bits just don`t work.

Ok, there are lots of good action sequences, gadgets and stunts, but there`s something missing which gives that vital dose of Bond. Some of the dialogue is rather appalling too - you`re just waiting for the drummer to come in (in that chat show/Alan Partridge style).

At the end of the day the negatives edge out the positives. There are too many niggly things which spoil your enjoyment. For me it`s the fact that it doesn`t feel enough like a Bond film at the end of the day. Brosnan alludes to this on his commentary, saying that they were trying to push the envelope, and take Bond to the next level, to take on the competition like The Matrix.

Although the film is a let down, the DVD itself is not. It`s stuffed with extras - from the commentaries and trivia track on disc 1 to the documentaries and multi-angle features on disc 2. The presentation is excellent - a brilliant transfer and fantastic sound. If you want to add this film to your Bond DVD collection (even if you have 1, 9 or 19 of the others) then you won`t be let down by this package, but you might be let down by the film itself.

It`s worth a rental (make sure you`ve got plenty of time to watch all the extras for full value for money - about 10 hours should cover it), and if you enjoyed it in the cinema then you`ll enjoy it again on DVD. At the end of the day, it was just not Bond enough for me.