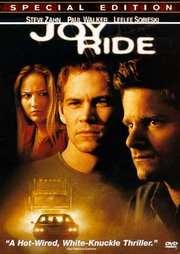 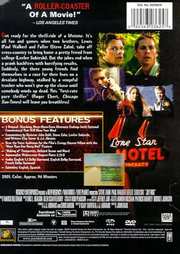 It`s not often you can take a great idea from an old movie, re-spin it with a modern slant and get a film that betters the original, but in Joy Ride we have it all and more. Don`t get me wrong here, this ain`t no remake but it does owe a nod in the general direction of one Mr Spielberg and his early outing Duel.

In both we have a big eight wheeler (a truck to you and me) chasing our protagonists. The difference here is it`s a bit more believable than Duel, as our twenty-somethings create their situation by playing a practical joke on said trucker, Rusty Nail. This of course backfires big time Rusty is a little bit angry and twisted they soon realise they`ve picked the wrong guy to be messing with. This is real edge of your seat stuff, right up to the finale and director John Dahl, who last good movie was Red Rock West, creates a foreboding atmosphere using great camera angles and lighting to give us Rusty as a faceless antagonist. Even when we only hear his voice over the CB it sends chills down the spine.

The casting is also superb with Paul Walker, (Fast and the Furious) and Steve Zahn, (Forces of Nature) playing the two ,chalk and cheese, brothers to great effect. Steve steals the show though with some great one liners and quick retorts. We are then introduced to Leelee Sobieski (Deep Impact) as Paul Walker`s possible girlfriend. She is superbly sexy but still very vulnerable when she finds out about the boys tom foolery and the impending danger from Rusty Nail.

The finale, which I won`t go into in detail, is heart stopping. And if you don`t like it you can always check out the extras on the disc which we will discuss later. Speaking of the DVD, this disc actually came out before the UK theatrical release. Some of you may have missed it because its name has been changed to Roadkill. A small piece of trivia is that this film has had several names. In the U.S.A. it`s called Joy Ride, in the U.K. Roadkill, in Hong Kong it`s Squelch! and was even called Candy Cane at one point (the name of the boys prank female CB handle).

A 2:35.1 anamorphic picture that`s just excellent. Most of the second half of the movie is in darkness but it shines through well with great detail and a superb quality of depth. The blacks are very solid and bright whites are vivid without smearing. The colour reproduction is faultless with no over saturation on usually harsh reds and no sign of bleed. There is only a small amount of edge enhancement but nothing to distract.

You get a Dolby Digital 5.1 juggernaut of a track. This is a great mix of subtle surround moments and big bangs that are fabulous in the creepy motel scenes during the practical joke payoff. The bass is strident yet not too overpowering.
There`s also a 2.0 surround mix in English and French. Both obviously lack the grunt and finesse of the full on DD 5.1 mix but those out there still holding onto their Pro-logic kit will still get a treat.

Open the container truck! This is why DVDs were invented! We`ve got a amazing and informative commentary track with director John Dahl, Steve Zahn, Leelee Sobieski plus writers Tarver and Abrams. There`s a short making of feature that offers a nice insight into the production and shows it wasn`t all scares on-set. There`s a large collection of deleted scenes that were cut mainly for pacing and some voice tests for the Rusty Nail character. The greatest extras are the four alternate endings that are a bit ropy and are not fully restored to the anamorphic glory of the feature. Actually there`s three filmed versions and one story boarded sequence. Some are good others are poor and predictable but it`s great to see how the ideas progressed.

An excellent attempt at a modern thriller. It has some moments of predictability but these are overshadowed by some truly hold-your-breath scenes. The DVD is well authored and is quite well packed with nice informative extras. Go on go for a Joy Ride! (aka, Roadkill, UK theatrical).