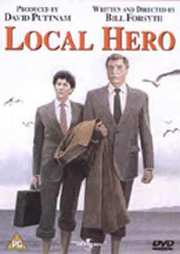 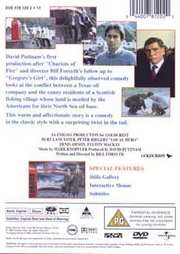 In these days, when the top grossing comedies (pun intended) are fare such as American Pie, or films from the Farrelly brothers, that there is also a tradition of more gentle humour, such as the old Ealing comedies is being forgotten somewhat. In that respect, 1983`s Local Hero is in my opinion, one of the last of a dying breed. Eschewing slapstick and gross comedy for something warm and affectionate, this is the kind of film you want to watch, curled up in a blanket with a mug of warm Horlicks.

Local Hero is the tale of the buyout of a Scottish fishing village by a major Texas oil company, Knox Oil to build a vast refinery complex. The head, Mr Happer sends a cosmopolitan oil company executive, MacIntyre is sent to the village to negotiate a purchase for the entire area with the residents. The canny villagers, represented by local hotelier, lawyer and barman, Gordon Urquhart realise that they have the opportunity to become millionaires, extend the negotiations in an attempt to drive up the price. As time passes, MacIntyre becomes more and more enamoured of the place and reluctant to push through the deal. All is finalised and the villagers are looking forward to their wealth when negotiations hit a stumbling block. Ben Knox, a vagrant beachcomber turns out to be the owner of the beach, and he has no desire to sell.

Directed by Bill Forsyth, there is some beautiful imagery in this film. You can`t really go wrong with the Scottish Highlands and glorious skylines. The village is a delight, it`s the perfect representation of a quiet idyll. If only I could live like that and still be in London, sigh. Only a letterbox transfer though, not ideal but the film still looks gorgeous.

The soundtrack is by Mark Knopfler. Wait! Don`t tune out just yet. It`s actually appropriate to the piece, and doesn`t go all out for the guitars as you would expect. I`m sure you would recall the theme tune from snooker in the eighties or maybe a coffee advert. Unfortunately the sound is only a stereo format. Good enough for video maybe, but you expect more for DVD. What you do hear is clear enough though.

Extras are light on the ground here, you get a stills gallery, with a series of 10 publicity shots and scenes from the movie but that is all. It`s difficult to tell what would be appropriate as an extra for a low-key title such as this.

This is a gentle story, with a wry look at corporate and individual greed. It`s set in the Scottish highlands so the scenery is bound to be fantastic. Life as seen in this film is slow paced and idyllic, the village is stereotypical, where everyone is easygoing and knows each other. But in a tale such as this, such fantasies are expected. The culture clash between Texas and the Highlands is also contrived but never forcefully, and you can`t help but falling in love with this dream world. The comedy is well observed and never crass. Small things, like the fact that Mac is almost always mown down my practically the only motor vehicle in the village whenever he sets foot outside, his gradual transformation from a dapper suited businessman to an Arran sweater wearing local, the fisherman who can`t decide on a name for his boat, the occasional intrusions by the RAF are sparkles in this shimmering story.

Burt Lancaster is the head of Knox Oil, Happer with a passion for astronomy and a problem with psychiatry, a wonderful actor in a brilliant role. Peter Riegert is the representative, MacIntyre who plays the culture shocked American with an understated charm. Denis Lawson is just brilliant as the canny Gordon Urquhart, but Fulton MacKay steals the show as the stubborn beachcomber, Ben Knox. For those who have only known this actor as the prison guard in Porridge, you get a chance to appreciate how versatile an actor he really was.

All in all, this film is a light diversion. Brain cells aren`t taxed and you come away feeling slightly better about the world. Which can only be good. It`s another of those titles that can be found at bargain basement prices if you look around and it`s definitely worth a spin if you want a change from loud and brash for once. The letterbox transfer is acceptable, but you want more than just stereo to give your player a workout. Turn up that Mark Knopfler theme loud.