DVD
Wrong Arm Of The Law, The (UK)

Steptoe and Son - The Lost US Pilot 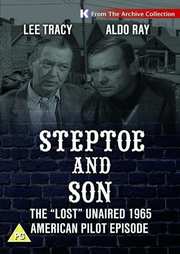 Synopsis:
The rare, untransmitted NBC US Pilot to one of the most famous British sitcoms.

Starring Lee Tracy, Aldo Ray and Jonathan Harris
Previously thought lost forever, the un-aired US pilot to Steptoe and Son is now available for the first time.Â Created by Ray Galton and Alan Simpson, this Joseph E. Levine production was made in America in 1967.

Harold Steptoe is thirty-seven and, since leaving the army, has been a drudge for his widowed, selfish father Albert, totting for goods to sell in their rag-and-bone business. One day Harold gets the offer of a better job and is determined to take it.Â