DVD
I'm not feeling myself tonight! 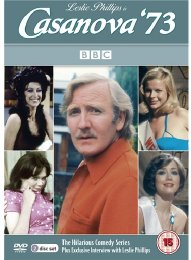 Synopsis:
One of Britain's greatest comedy icons, Leslie Phillips, stars in the recently uncovered TV comedy classic, Casanova '73 as footloose - if not fancy free - Henry Newhouse, alongside Jan Holden as his long-suffering wife. Taking advantage of the sexual revolution, Henry happily philanders, or attempts to philander, at every opportunity, sometimes successfully - never without a price. Whether it's an air hostess or beauty pageant contestant, a stripper turned fire-eater or a niece in need of advice, what Henry sees, Henry can't resist.

Written by the acclaimed team of Galton and Simpson (Hancock, Steptoe and Son, Citizen James), the series was inspired by Dennis Potter's more-serious, if more naked, Casanova. Little did they realise the scandal that would result when TV watchdog Mary Whitehouse rallied her troops. Casanova '73 would not see '74. Now, for the first time on DVD, audiences can once again enjoy Leslie Phillips at the top of his form, bringing his theatrically-honed skills to Casanova '73, filmed before a live audience, with all the hilarity of 70's British Farce at its height.