DVD
The Best of Benny Hill 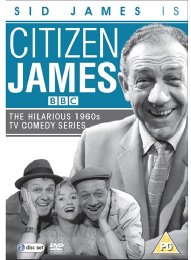 In Series One, written by Alan Simpson and Ray Galton (Hancock, Steptoe & Son), Sid James is the hard-working layabout, gambler and con artist, hanging out in Charlie's Nosh Bar and on the Soho streets, occasionally stopping off at Liz's drinking club to borrow money to pay off his gambling debts and cons gone wrong.

In Series Two and Three written by Sid Green and Dick Hills (Morecambe & Wise), Sid is now accompanied by Sydney Tafler in the new role of Sid's mate Charlie, as they take on teenagers, watch dogs, trial by jury and a very crusty loaf.

These are the only known surviving episodes and comprise the complete Series One, along with two episodes each from Series Two and Three