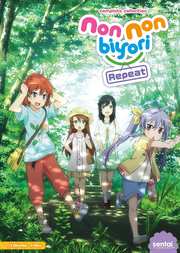 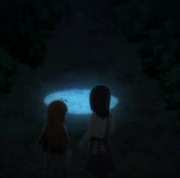 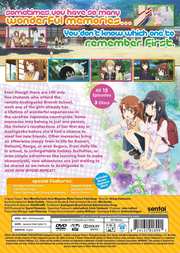 DVD
Tonari no Seki-kun The Master of Killing Time

I can’t get enough of Non Non Biyori. It’s a perfect slice of life show, made special by its rural setting, and gentle, contemplative pace. Of course wishing a thing, doesn’t necessarily make it so. So many shows have fallen at the first hurdle when it comes to sequels and spin-offs, simply by changing too much, or at the other extreme, merely rehashing what came before. The name of the Non Non Biyori sequel made me pause for a minute, wondering if it really would just be a Repeat. Thankfully Non Non Biyori Repeat did manage to add something new while holding onto what made the first series so special. And it’s no surprise that I now look at that second season for review, and thanks to the curse of Region A, I’m watching it on DVD. 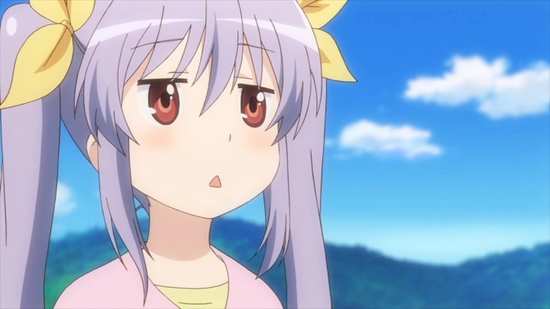 It could have been a painful culture shock when Hotaru Ichijo’s father got transferred out of Tokyo for work. Taking a city girl and putting her in the middle of the countryside is isolating enough, but 5th year Hotaru’s new school is small! It takes place in one classroom combining Elementary and Middle Schools, and has just four other students, siblings Natsumi, Komari and Suguru Koshigaya, in 7th, 8th, and 9th years respectively, and young Renge Miyauchi is a first year. Renge’s oldest sister Kazuho is their teacher. It could have been a big shock, but in Renge, Natsumi and Komari, Hotaru’s found her best friends. Non Non Biyori covered a whole year in the life of the four friends. Non Non Biyori Repeat comprises more adventures that took place during that same year. 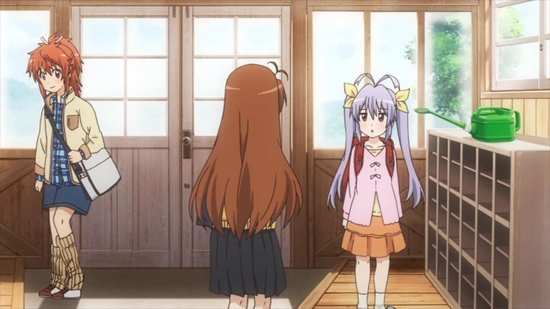 12 episodes of Non Non Biyori Repeat plus extras are presented across 3 DVDs from Sentai Filmworks.

Disc 1
1. I Became a First Grader
2. We Went to Watch the Stars
3. I Got Motivated During the Consecutive Holidays
4. I Made a Teru Teru Bozu
5. I Ate Okonomiyaki
6. I Became Closer to Hotaru

Disc 2
7. I Boldly Leapt In
8. I Was In Charge of School Lunch
9. We Went Moon Viewing Together
10. I Practiced Very Hard
11. I Became a Pampered Child
12. One Year Has Passed 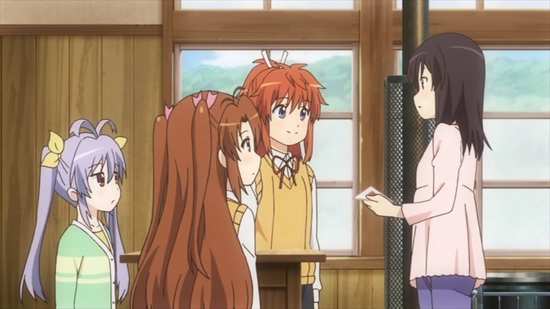 Non Non Biyori Repeat gets a 1.78:1 anamorphic NTSC transfer on these discs, and it offers smooth, clear and vibrant animation. The image is clear and sharp, compression is minimal, and the colours are bright and vivid. The character designs are appealing, and friendly, but the world design, the rural setting really makes the show warm and nostalgic. Studio Silver Link do the honours, and they present an expressive and character focused animation. 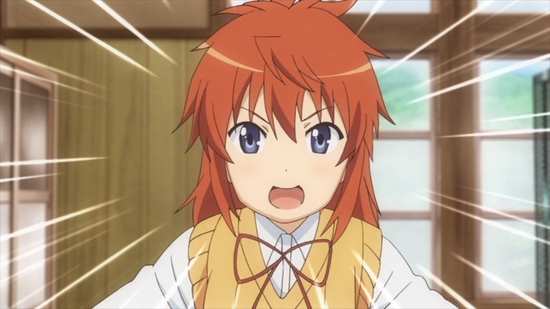 The audio comes in DD 2.0 Stereo Japanese flavour, with English subtitles locked during playback. The dialogue is clear, and the sound comes across without any glitches or dropouts. The subtitles are accurately timed and free of typos. The show gets some really nice music, a nano.RIPE opening theme, and the voice cast supplying the end theme in character, while the show’s incidental music suits the rustic feel perfectly. The character voices too are perfect, great performances that really engage the audience with the characters. You might need to press pause to capture all of the translation notes that pop up, certainly more here than in the first season. 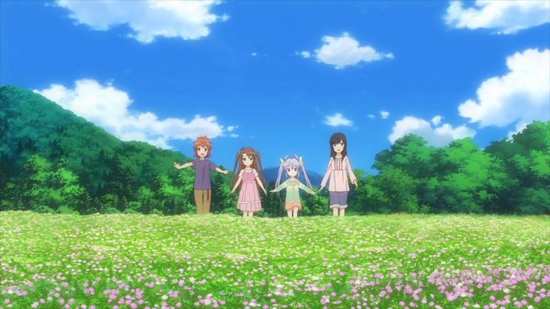 You get three discs in an Amaray style case, with two on a central hinged panel, and one at the rear.

The discs present their content with static menus and jacket pictures, and each episode is followed by a translated English credit reel.

The first season was a bare bones release in the US with not even the commentaries that the Japanese got. The second season redresses that balance with a whole third disc devoted to more extras. 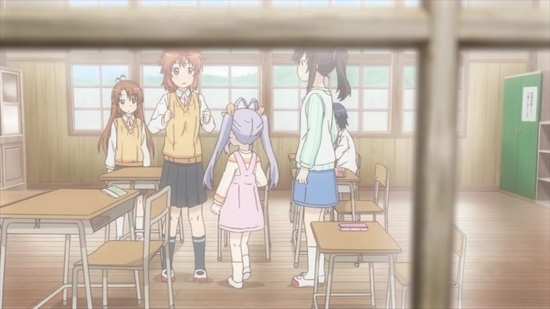 Here you will find trailers for Hello! Kinmoza, Wish Upon the Pleiades, Wake Up, Girls! and Gourmet Girl GRAFITTI. 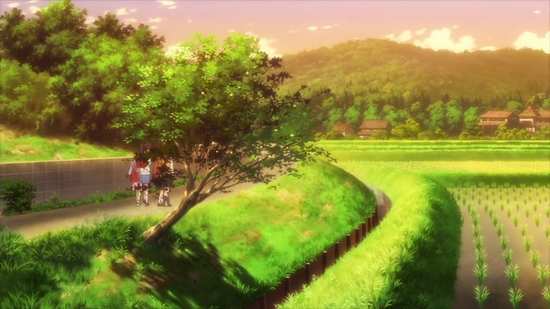 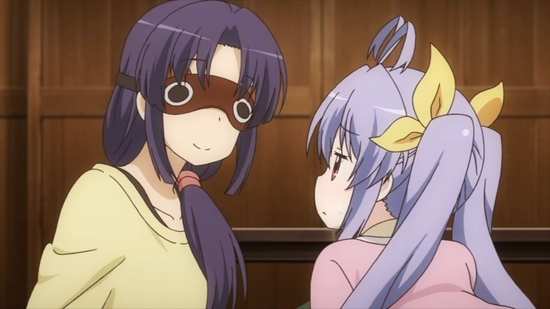 Disc 3 has the rest of the extra features, beginning with Dagashi. Dagashi is Japanese for candy, and given that the characters spend quite some time in a candy store in the show, this little bit of nonsense reflects that, by having the four main voice actresses have some fun with sweets and snacks. There are six segments with a total run time of 62:47.

The Cast Panel Video has the actors again, this time on stage at a pre-screening event. This lasts 31:53.

You get several Japanese promos for the show, the textless opening, and two textless closings. 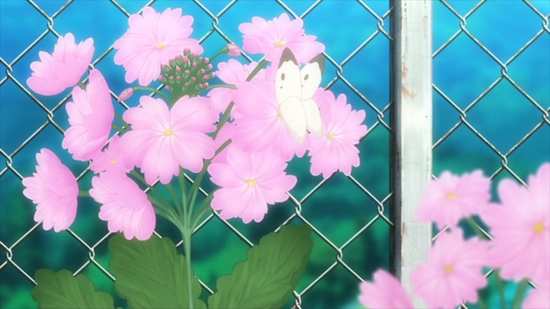 I absolutely adore Non Non Biyori, and it appears that I’m not the only one. As I was watching these discs for review, a Non Non Biyori feature film was announced in Japan. It seems audiences can’t get enough of the inconsequential antics of these four friends in a quiet, rural setting. I fell in love with the show with the first series, and I have to admit that the second season is even better than the first. 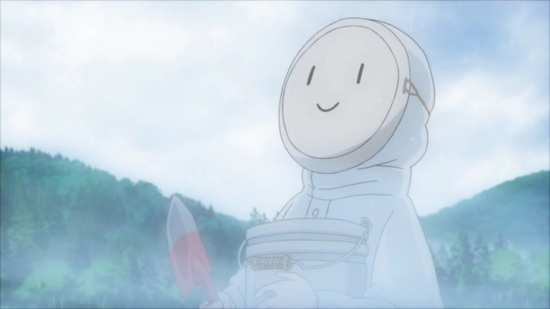 In many ways, Non Non Biyori Repeat offers more of the same. Indeed, the title briefly had me suspecting that the run would merely be a re-run of the first season (as has occasionally happened with shows like Gintama), and I would have been happy with that; any excuse to re-watch it. But this second season slots in amongst the episodes of the first. These are stories that take place within that same year, and you could conceivably watch the show alternating season 1 and season 2 episodes. 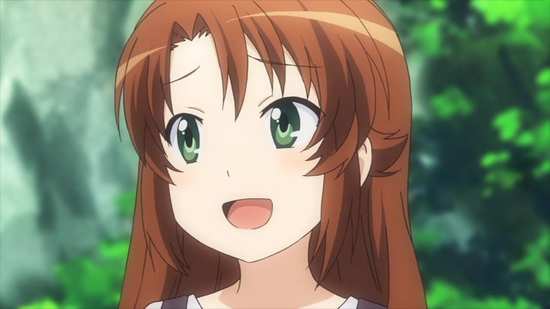 After all, it does have the same light, slice of life antics to it, devoting half an episode to an ‘invented’ ruler and desk game, an episode of school homework during the holidays, taking care of tadpole shrimps, a day spent cleaning the school pool, working up the courage to jump off the bridge into the stream, and many, many other small adventures for the four friends. What make the show special are the characterisations, Komari’s aspirations to be a normal, upstanding school girl, Natsumi’s rambunctiousness, Hotaru’s cute obsession with Komari, and Renge’s odd perspective on life. That combined with the interactions between the characters, has the effect of making every second of the show un-missable. 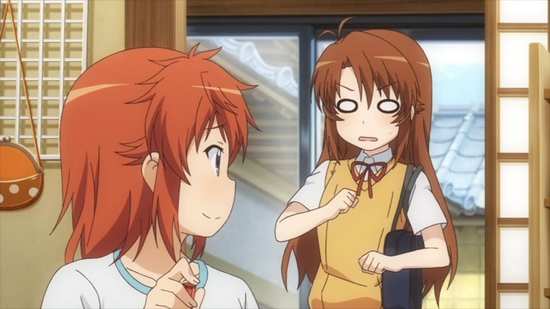 The thing about the first season was that it took the show mostly from newcomer Hotaru’s perspective, or big sister Komari’s perspective, and it revelled in interactions between the four, leaving the other characters very much as a supporting cast. The second season changes things up a lot in the way it tells the stories, mixing and matching character combinations, so you might get half an episode of Hotaru hanging out with Natsumi, or an episode devoted to Renge alone (her first day at school for example). More significantly, Non Non Biyori Repeat makes the other characters much more integral to the stories. You see more of the Candy Shop owner, Kaede, Renge’s sisters Hikage and teacher Kazuho, and Natsumi and Komori’s neighbour Konomi. They’re no longer just the supporting cast, and far more integral to the stories. Fleshing them out as characters and having them interact with the main quartet makes the anime a lot richer and involving as a result. You begin to see a continuity, and a mirror of experiences when the show occasionally flashes back to Kaede, Konomi, and Hikage all going to the very same school, getting up to the same kind of antics, having a similar friendship. 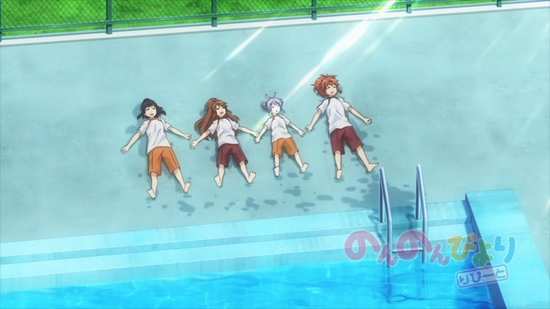 When the anime world is as replete with slice of life shows as it is these days, it takes something special to really stand out above the crowd. Non Non Biyori does it simply by being the best at the purest form of the genre. There’s no major plot, no gimmicks, and no little twist to make it seem different. It’s just the exemplar of good character writing, and the second season, Non Non Biyori Repeat is where it perfects its art. I still hope that it will get a Region B release, as I would snap up its Blu-rays in a flash if it did.