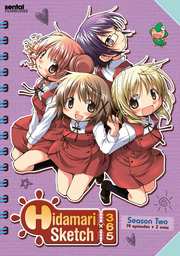 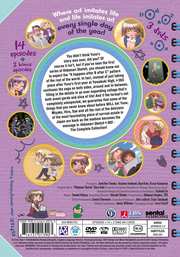 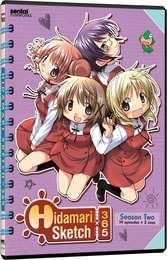 It’s been two years since MVM released Hidamari Sketch in the UK, a delightful comedy series that is one of the most popular of its genre. It’s subsequently spun off three more seasons, and a handful of specials too. Well, I say popular, but that popularity apparently hasn’t translated around the world. I’ve been waiting for the subsequent seasons to get a UK release, but two years on, the first sequel, Hidamari Sketch x 365 is yet to appear on UK schedules. It appears that the show just didn’t garner the support it needed to allow for more to be brought over here. A little research shows that MVM have a higher hill to climb than I previously thought. The usual path to release comes via the US for language localisation, and then Australia for region localisation. But I couldn’t find Hidamari Sketch for sale anywhere in Australia. Apparently MVM got the first series direct from the US, and had no one to share the burden of costs with when it came to creating Region 2 and Region B discs. They would have had to sell twice as many to recoup their costs. Anyway, I think two years is enough time to wait, so I’ve bitten the bullet and imported the US Region 1 DVDs, which I can play, as opposed to the Region A Blu-rays, which I can’t. 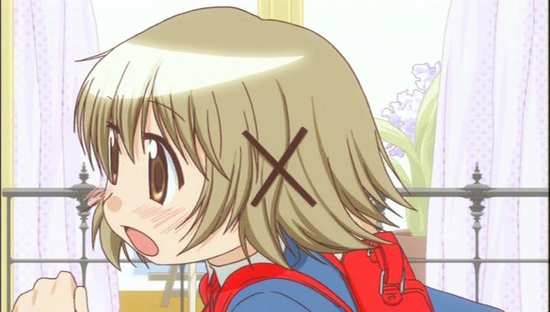 Hidamari Sketch is a slice of life show, random vignettes in the lives of four girls who together attend the Yamabuki art school. Yuno and Miyako are first years, Sai and Hiro are second years, and all four live at the Hidamari Apartments, directly opposite their school. One of their teachers is the flamboyant Miss Yoshinoya, who loves to cosplay for her class, something the elderly principal of the school frowns on. The show follows the group of friends as they move towards their dreams of becoming artists. 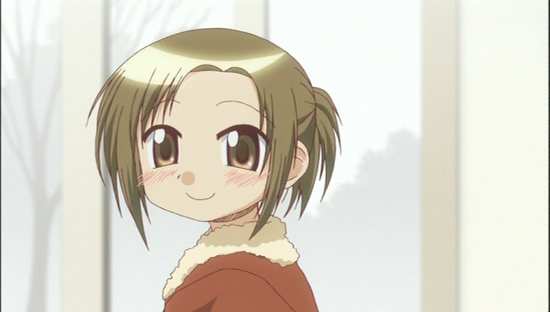 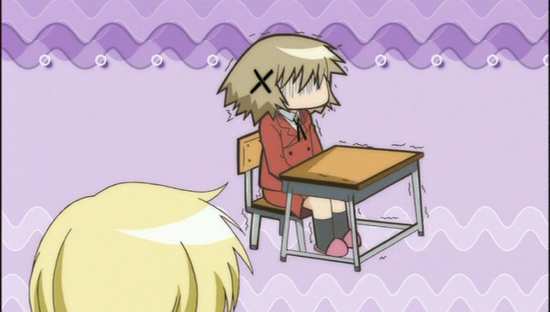 Hidamari Sketch is presented on these DVD discs in 1.78:1 anamorphic NTSC format. The image is clear and sharp throughout, with strong and consistent colour reproduction, and given SHAFT’s particular style of animation, a minimum of digital banding, even on DVD. This is a SHAFT animation, and it bridges the gap between the all out visual gag-fests of Pani Poni Dash and Negima, with the more restrained storytelling of Bakemonogatari and Madoka Magica. With Hidamari Sketch, the animators stick to a set style, a restrained and pastel palette, and avoid trying anything and everything to make a visual impact. But the use of gags, short-cuts and visual tricks is still more prevalent. One example is Yuno’s hairclips. She wears her hair tied back with cross shaped hairclips, and it isn’t long before the animators simply put a cross on screen when she’s speaking, the same with Hiro’s wavy hair, and Sae’s glasses. It’s generally an enjoyable viewing experience the further you go into it, but it takes a while to get used to the show’s animation style. 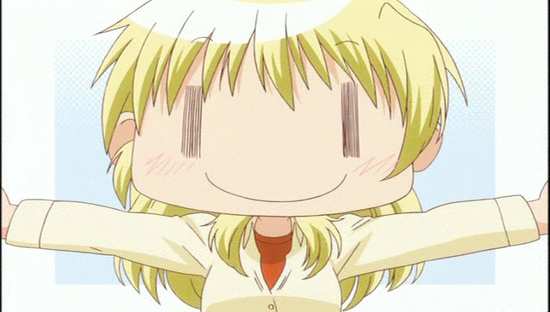 Hidamari Sketch gets a DD 2.0 Japanese audio track with optional English subtitles. Well, I say optional, but as this is a subtitle only release, only the most fluent of Japanese speakers will turn them off. There’s no problem with the audio, the characters are ideally cast, the dialogue is clear, the music suits the show, and the stereo gives the show a decent amount of presence. I have a few nitpicks with the subtitles though, which are accurately timed, and suffer only a couple of typos, although episode 15 insists in spelling ‘pedalling’ as in bicycle, as ‘peddling’ as in selling. This time around the translation seemed a little tighter than in the first season, with fewer uses of US idiom, and caterpillars remained caterpillars in the subtitles. 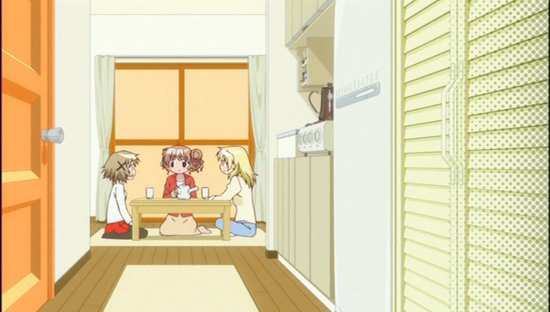 The discs boot to static menus, with jacket pictures and translated English credit reels after each episode.

Disc 1 has Sentai trailers for Tayutama: Kiss On My Deity, Hidamari Sketch, Living for the Day After Tomorrow, Gintama, Eyeshield 21, and Hell Girl: Second Cage.

Disc 2 has the textless credits, all 16 textless openings, and the one textless closing.

Disc 3 has the two bonus episodes listed above. 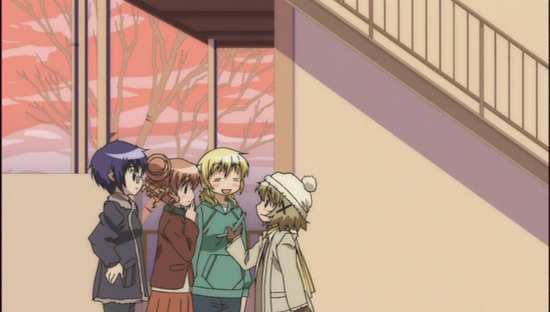 The girls in Hidamari Sketch love eating their snacks, which can’t be more appropriate as Hidamari Sketch is the anime equivalent of comfort food. It’s not about deep narratives, or complex character development. This isn’t a show that stimulates the mind, or evokes strong emotional reaction. It isn’t the most hilarious of comedies. But what it is, is pleasant. It’s fun, it’s warm and inviting. It’s a show where you get to hang out with four quirky friends, and you feel good for a while afterwards. It’s sweet, it’s filling, although unlike snack food, it’s only good for you. There are no negative effects to watching Hidamari Sketch. 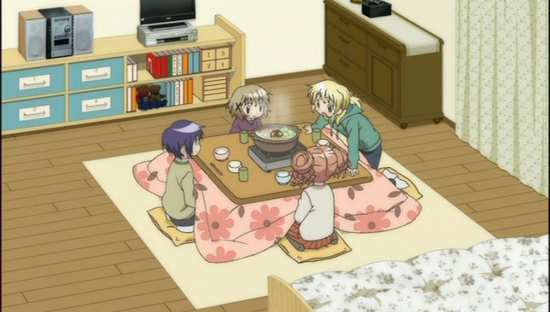 Season 1 of Hidamari Sketch covered a whole year of the girls’ lives at the Hidamari apartments, and going to Yamabuki high school across the road. Season 2 covers the same year. That’s one of the advantages of doing a sketch comedy show, with the episodes distributed randomly. We got to watch a day or two at a time in their lives, apparently randomly chosen through the year, so what that means for season 2 is that you get 16 more episodes set during that year, different days when other interesting things happened to the girls. Once again, while each ‘day’ stands alone, there are little points of continuity to pick up on if you’re invested in the stories. It’s a good idea to watch Hidamari Sketch x 365 back to back with Season 1. Although given the number of days in a year, you could conceivably have another 20 seasons all set during their first year at school. 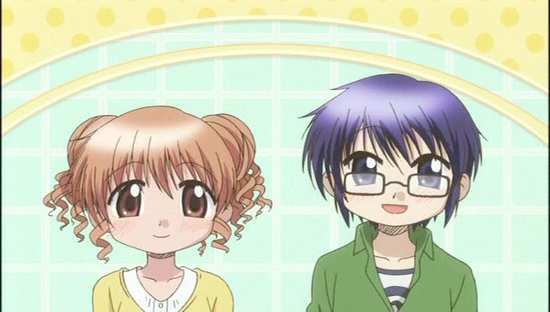 Having said that, the first episode is actually something of a bonus, set before Yuno starts at high school, catching up with her on the day that she took the entrance exams, then moving onto her first day at Hidamari apartments, and meeting Miya, Sae and Hiro. The second episode shifts forward a whole year, as a new set of prospective students sit their exams, Sae’s sister Chika sits hers, and Yuno reflects on her first year at school. Once again the show flits back and forth through the year, reflecting on the adventures and moments that the girls have and share. It could be a day spent sketching at a shrine, the day a stray cat moves in with Miya, celebrating Chika’s exam results, the day of the entrance ceremony, the school sports day, Hiro’s accidental trousers, fooling around with a Polaroid camera, and plenty more. 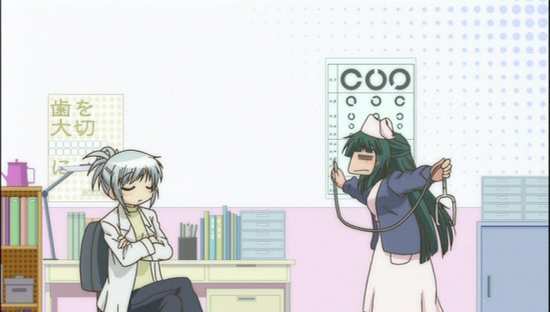 It all sounds pretty mundane and un-dramatic but Hidamari Sketch has a talent in finding the humour in the mundane, and enhances it with a cast of eccentric characters. The bizarre Ms Yoshinoya, with her squeaky shoes is a staple of the show, as is the eternally quivering and geriatric school principal. As mentioned, Sae’s sister Chika makes an appearance or two, while Sae’s rival/friend Natsume shows up as well. Hidamari Sketch is the textbook definition of a feel-good show. You’re hanging out with your animated friends, and it doesn’t matter that it’s just a vicarious experience.