Review of Antitrust
added by
Anil Khedun
Places to Buy 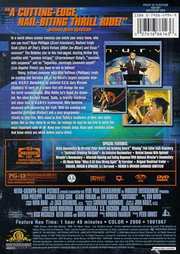 Back Cover of Antitrust

DVD
Get Carter (US)

DVD
Autumn In New York (US) 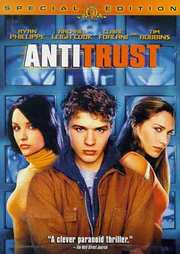 Synopsis:
In a world where unseen enemies can watch your every move, who can you trust? Ryan Phillippe (Cruel Intentions), Rachael Leigh Cook (She`s All That), Claire Forlani (Meet Joe Black) and Oscar® nominee Tim Robbins star in this fast-paced, sizzling thriller that crackles with "genuine intrigue" (Entertainment Today), "considerable suspense" and an "ingenious, stunningly cinematic payoff" (Los Angeles Times) you have to see to believe!

Young, brilliant computer whiz Milo Hoffman (Phillipe) lands an exciting and lucrative job at the world`s largest computer company, N.U.R.V. Handpicked by powerful C.E.O. Gary Winston, to work on a project that will change the way the world communicates, Milo thinks he`s found his dream job. But when his best friend, Teddy, is brutally murdered and clues lead to N.U.R.V`s involvement, Milo becomes obsessed with uncovering the truth. With his cunning and beautiful girlfriend (Forlani) and a sexy programmer (Cook) to help him, Milo races to beat Teddy`s murderers at their own cyber game. But as they close in on him, he realizes he may be too late to learn the most important code of all: Keep your friends close. Keep your enemies closer. And know which are which before you are killed.

The movie was titled as "a clever paranoid thriller". For once, I totally agree. It`s very rhythmic, thrilling and high-tech.
Both Phillipe and Robbins are doing very good jobs.
The video transfer is excellent. The movie looks very high-techi, thus not having any compression signs. All the computer related visuals look really great.
The DD 5.1 soundtrack is excellent as well. The surrounds are used both for sound effects and music. The music itself is really good. Notice the music in the opening scene - the 6 distinct channels can be easily noticed.
The menus are beautifully animated with sound.
The extras include a commentary, a behind the scenes look, 7 deleted scenes (including an alternate opening and ending) and a music video.
Bottom line - a great movie that looks good, sounds good and makes a lot of sense nowadays.
posted by Zvi Josef on 5/6/2001 01:48