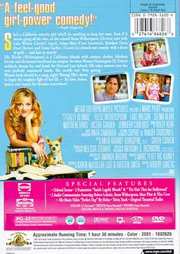 DVD
Autumn In New York (US)

DVD
Honeymoon In Vegas (US) 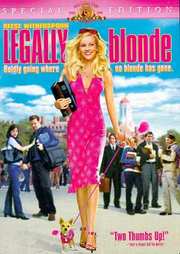 Synopsis:
She`s a California sorority girl who`ll do anything to keep her man. Even if it means going all the way… to law school! Reese Witherspoon (Election) stars with Luke Wilson (Charlie`s Angels), Selma Blair (Cruel Intentions), Matthew Davis (Pearl Harbor) and Victor Garber (Titanic) in a knock-out comedy with a heart of gold - and hair to match!

Elle Woods (Witherspoon) is a California blonde with couture clothes, fabulous friends and the hottest boyfriend on campus. So when Warner Huntington III (Davis) suddenly dumps her and heads for Harvard Law School, Elle takes matters into her own perfectly manicured hands. She enrolls too! Now getting Warner back should be a snap, right? Wrong! Elle`s about to begin the toughest fight of her life - for love, honor, justice and respect for blondes everywhere!

Director of Photography:
Anthony B. Richmond

A really funny and fun romantic comedy. It`ll probably change your opinion about blondes. :)
The video transfer (both the widescreen and pan&scan) is very good. There are no compression signs and the various blondes look very real (though not all are natural, obviously).
The DD 5.1 soundtrack is good. While the surrounds are mostly silent, they do kick in when the music is on.
The menus are all animated.
The extras include 2 commentaries and a trivia track on side 1 and 8 deleted scenes, 2 featurettes and a music video on side 2. All in all, the extras are extensive and interesting.
Bottom line - a very entertaining movie for everyone to enjoy.
posted by Zvi Josef on 14/11/2001 13:43
7 / 10

The premise of Legally Blonde is a fairly familiar one. Valley girl Elle Woods (Reese Witherspoon) is a bubbly blonde who's main concerns in life seem to be her dog Bruiser and her hair and beauty regime. All of this changes however when her boyfriend, Warner Huntington III (Matthew Davis), dumps her for not being "serious" enough for him.

Obviously this turn of events devastates Elle, who goes on a mission to gain entry to Harvard Law School in an attempt to prove herself worthy of Warner. When Elle arrives, she finds that law school is more taxing than she could ever have imagined. Aside from having to deal with snooty classmates and acerbic professors, Elle has to come to terms with the fact that Warner now has a fiancée, the delightfully uptight Vivian Kensington (Selma Blair).

Seeing solace in the local beauty parlour, Elle meets Paulette Bonafonté (Jennifer Coolidge), a divorced beautician with whom she strikes up a friendship. The two help each other to feel better and Elle studies harder than ever before, aided by legal assistant Emmett Richmond (Luke Wilson).

When one of Elle's old sorority sisters is accused of murder, her professor's law firm gets the case. Elle, Warner and Vivian are all drafted in to help with the workload, and before long Elle learns that she may just have more legal savvy than anyone imagined, including herself!

Perhaps I'm going soft in my old age (or in the company of my girlfriend, but that's a private matter…), but I actually enjoyed Legally Blonde. Not in an "'I was forced to watch it" way, but in an "I'd probably watch that on my own" kind of way. Reese Witherspoon is the key to all of this. She portrays a genuinely likable character, one that lights up the screen with her bubbly personality. Her performance is crucial to the success of the film, and I don't know of any other actress who could have pulled it off quite as well.

The supporting cast are also good, with Davis and Blair playing the stuck up boyfriend and fiancée perfectly. Jennifer Coolidge is also great as Paulette, and I am grateful to the film for giving me insight into the workings of the "bend and snap" method of attracting a potential mate. Another thing I liked about this movie, and some may consider it an add point to pick up on, is the way that Elle is treated by her friends. It is usual in this type of comedy for there to be one or two "friends" who make snide comments at the expense of the lead character. This doesn't happen in Legally Blonde, and Elle's friends all rally round to help her accomplish what she sets out to do. Like I said, an odd point, but it's nice to see a film that portrays friends in this manner for a change. Oh, and keep an eye out for the dog. If you should happen to miss it yourself, you'll be reminded of when it appears by the cries of 'awwww' emanating from any females that may be in the room…

Legally Blonde is presented in two formats: The original 2.35:1 widescreen ratio, which is anamorphically enhanced of course, and 1.33:1 pan & scan. You simply select which version you would like to watch at the beginning of the film. This is a nice feature, as there are still some people who (unbelievably) prefer pan & scan transfers. The video bitrate comes in at 5.37Mb/sec for the widescreen transfer, and 5.48Mb/sec for the pan & scan version.

As you would expect from a recent release, the transfer is of a good quality. The image is virtually free from defects, which makes it a little hard to criticise, so I won't. Instead I'll just say how bright and vibrant the image is, and how fantastic the whole film looks as a result. Overall this is a very pleasing transfer.

The Dolby Digital 5.1 track provides clear dialogue and effects throughout the film, but will do little to try your system. This really isn't the type a movie that needs a lot of fancy surround effects, which is a good thing, as few are present. Surround action is resigned to ambient effects and music cues, but this does not detract from what is a pleasant mix.

The disc features a number of interesting features, including a theatrical trailer, deleted scenes, 'Perfect Day' music video, two featurettes - "Inside Legally Blonde" and "The Hair That Ate Hollywood", a subtitle trivia track and two audio commentaries. The commentaries feature director Robert Luketic, Reese Witherspoon, producer Marc Platt and members of the film crew, and are definitely worth listening to.

Director Robert Luketic introduces the deleted scenes, although they total only about ten minutes worth of footage. The first of the featurettes deals with the origins of the film, from its beginnings as a novel, through to the scriptwriting and casting processes etc. The second featurette details the problems that they had with the many hairstyles throughout the film, be it continuity or otherwise. It's worth one viewing at least.

Legally Blonde is a nice little comedy, starring a charming actress. It is the sort of film you put on when you're in the mood for some light-hearted entertainment, without the need to tax your brain. This is clearly a film that is aimed at the 'Clueless' market (my girlfriend loves both films), and whilst not quite as fresh as that movie, Legally Blonde is definitely worth a look.
posted by Chris Gould on 21/12/2002 00:57