Review of Antitrust
added by
RWB

Review of Antitrust
added by
Jitendar Canth
Places to Buy 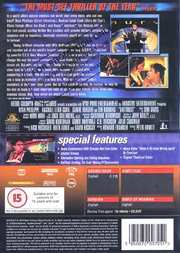 Back Cover of Antitrust

DVD
Get Carter (US)

DVD
What`s The Worst That Could Happen? (UK)

DVD
Along Came A Spider (UK)

DVD
Josie And The Pussycats (UK) 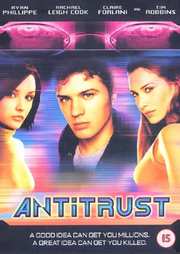 Synopsis:
In a world where unseen enemies can watch your every move, who can you trust? Ryan Phillippe (Cruel Intentions), Rachael Leigh Cook (She`s All That), Claire Forlani (Meet Joe Black) and Oscar® nominee Tim Robbins star in this fast-paced, sizzling thriller that crackles with "genuine intrigue" (Entertainment Today), "considerable suspense" and an "ingenious, stunningly cinematic payoff" (Los Angeles Times) you have to see to believe!

Young, brilliant computer whiz Milo Hoffman (Phillipe) lands an exciting and lucrative job at the world`s largest computer company, N.U.R.V. Handpicked by powerful C.E.O. Gary Winston, to work on a project that will change the way the world communicates, Milo thinks he`s found his dream job. But when his best friend, Teddy, is brutally murdered and clues lead to N.U.R.V`s involvement, Milo becomes obsessed with uncovering the truth. With his cunning and beautiful girlfriend (Forlani) and a sexy programmer (Cook) to help him, Milo races to beat Teddy`s murderers at their own cyber game. But as they close in on him, he realizes he may be too late to learn the most important code of all: Keep your friends close. Keep your enemies closer. And know which are which before you are killed.

This is the kind of film that requires you to adopt a particularly forgiving attitude in order to derive any real enjoyment. In my case, It caught me on a good day and although it`s quite far-fetched (and arguably mis-cast), I did find it quite diverting.

That`s not to say that it`s a great film (passable is the best description), but it`s certainly an evenings-worth of entertainment however you splice it. I don`t really care for the "teen" performances and melodramatic overtones, but the story is certainly solid enough and Tim Robbins is highly effective in his role. The plot stretches plausibility to breaking point on several occasions, but it makes enough sense in the end for you to forgive most of the earlier lapses.

It`s not an excessively original idea though and I immediately noticed the startling resemblance it has to another recent film. If you`ve seen "The Skulls", but you haven`t watched this yet, you may aswell save yourself the bother!. Antitrust is almost exactly the same as that movie, except it features a multi-national corporation as the villain instead of a secret society. The themes, tone and story arc are incredibly similar throughout and anybody that didn`t like Skulls should avoid this like the plague (a big vice versa if you did though!).

The disc itself is MORE than adequate and it screams "value for money". Some would call that over-praise for what looks like a merely mediocre selection (on paper at least). Fact is though, the extras are all high-quality efforts and there aren`t any "fillers" or puff-promotional pieces. What you do get is deleted scenes (particularly interesting ones aswell) which were cut after screen-tests and not necessarily because they were poor (they`re uniformally good in actual fact). The accompanying commentary for these scenes and for
the main feature shed some real light on why they were excised (the director on these commentaries is Peter Howitt who played Joey in "Bread" no-less!).

There`s a good 23min feature and a music video too, so the emphasis is on worthwhile material and not pointless space-wasting stuff. Needless to say with such a new title, the A/V quality is more or less faultless.

Basically then, a competent movie that has decent additional content. Not everyone will be as lenient as I chose to be and the film is admittedly far from perfect. That doesn`t mean you won`t enjoy it while it`s playing though and if you can de-activate your overly cynical-eyes for a few hours, then Antitrust may well have something to offer.