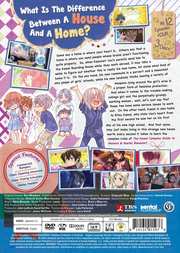 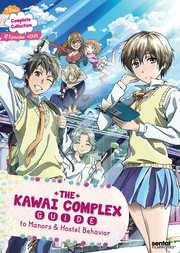 What is the difference between a house and a home?
Certificate:
Running Time: 323 mins
Retail Price: $49.98
Release Date: 2015
Content Type: TV Series

Synopsis:
Some say a home is where your heart is. Others say that a home is where you send people whose brains aren't functioning quite properly. So, when Kazunari Usa's parents send him to the Kawai Boarding House while they work abroad, it may take a while to figure out whether this is really his new home, let alone what kind of home it is.

On the one hand, his new roommate is a pervert and a masochist who peeps at girls' schools, while his new landlady thinks leaving a variety of weapons lying around the girl's area is a proper form of feminine protection. And when it comes to the trouble-making college girl and the perpetually grumpy working woman... well, let's just say that those two have some serious issues to work out.

On the other hand, Kawai is also home to Ritsu Kawai, who stole Usa's heart from the first second he saw her on his first day at his new high school. And that alone may just make living in this strange new house worth it!