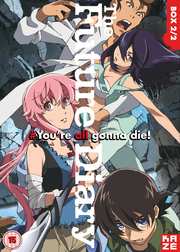 It’s been a fair few months since the first part of Mirai Nikki – Future Diary was released in the UK; long enough for me to completely forget the significant events of that collection, most notably who in the God Game had lived and who had died up to this point. In fact I’d forgotten most of the major characters in the show, but one thing I did remember was the Misery inspired cliff-hanger at the midpoint of the series, with pink-haired psycho Yuno, finally getting her beloved Yukki just where she wants him, bound, catatonic, and unresisting. To find out what doesn’t happen next, Google search for some Mirai Nikki doujins. 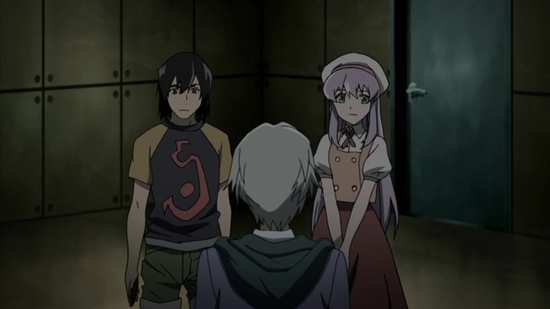 Yukiteru Amano is an atypical middle school student. He doesn’t socialise, he keeps to himself, preferring to think of himself as an observer of life, not a participator. He notes his observations in a diary on his phone, but otherwise sits at the back of his class in school, trying to avoid interaction. His real life is his imaginary life, in his imaginary world, with his imaginary friends, Murmur and Deus, the God of his world. Then one day, Deus announces that he’s planning a new game, and asks if Yukiteru would like to play. The next day, he learns that his imaginary world wasn’t his to begin with, and it wasn’t quite so imaginary either when he starts seeing entries in his diary for the future. That’s good for passing exams, and it’s even better for avoiding bullies, and it would be good if that was all it was. 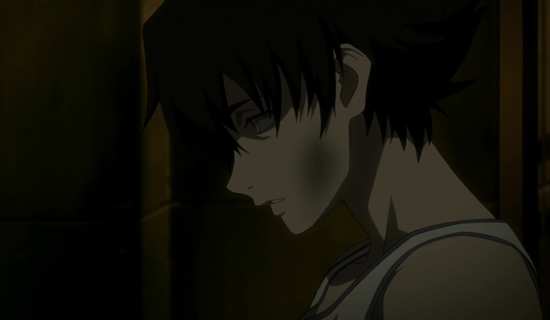 For Deus’ game is a survival game, and eleven other players have been invited, given future diaries of their own. They each have to use their diaries to find and identify the other players and kill them (or destroy their diaries as the players and their diaries are now as one), and the last one standing gets to be the next god! Yukiteru gets a chilling example of what that means when the next day; he looks at his future diary and sees a final entry, a Dead End. Fortunately for him he has a guardian angel of sorts in classmate Yuno Gasai. She’s actually another player of the game, but her diary only tells the future of one person, Yukiteru Amano, and she’ll do anything to keep her ‘Yukki’ alive. She’s been stalking... in love with Yukiteru since the start of the year, hence her obsession with chronicling his life, and consequently her future diary centres on him alone. This might be the best way for Yukiteru to survive this game, only Yuno’s more than a little... unhinged. When last we saw them, Yuno had Yukki stripped, drugged and bound to a chair in a rundown hotel, determined to service his every needs while his friends died in an attempt to rescue him; at least that was the plan... 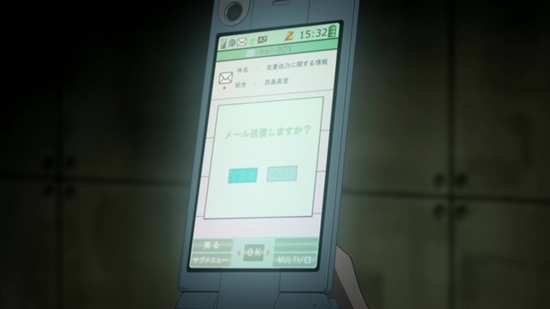 I reviewed Part 1 on Blu-ray, but for Part 2, Kazé sent out the DVD check discs. They may be miserly with HD media, but they’re profligate with SD, stretching all thirteen episodes of Part 2 across 3 dual-layer DVDs. We still don’t get any of the US extras, and it seems no-one gets the Redial OVA. 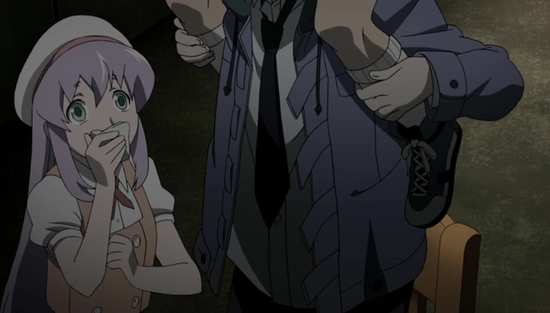 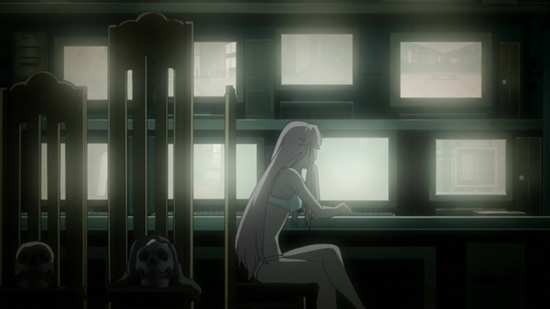 Mirai Nikki gets a 1.78:1 anamorphic transfer across these three discs, and the image quality is pretty impressive for an anime DVD. Certainly there were no immediate problems with compression and the like, no sign of digital artefacts beyond the usual banding issues, which once again were more prevalent in the darker scenes. I guess splitting the episodes across three dual layer DVDs helps in that regard. The image is clear and sharp throughout, the colours are strong and vibrant, and the animation smooth and detailed. Mirai Nikki is one of those shows that can switch from bright, chirpy and playful to dark, and ominous at the drop of a hat, and that tells in the animation style, with pretty and generic character designs, with a fine line in unhinged and crazy expressions. This is also a show which doesn’t resort to animator self-censorship, and it can get pretty gory at times. I thought the eyeball scene in Deadman Wonderland was bad... 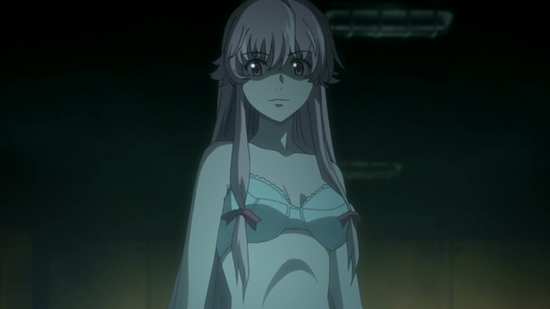 You have the choice of DD 2.0 English and Japanese, with English and French subtitles locked during playback. Of course the English track must be a downmix, given that the original Funimation dub is available in 5.1 Surround on the US DVD and Blu-ray releases. I went with the Japanese and the dialogue was clear enough, the action coming across well, generally the expected experience from an anime audio track. The music for the show is quite special, especially the incidental music, quirky and not quite appropriate, but surprisingly effective. The Funimation dub is solid enough, and thankfully they didn’t try and emulate the Japanese voice actor performances. For one thing, Norio Wakamoto is a one-off as Deus, but Yuno especially would sound weird if the English voice actress tried to match the Japanese. One downside is that with this being a PAL DVD release, we have 4% speedup, and the consequent pitch correction resulting in some wobbly background music. As for the subtitles... 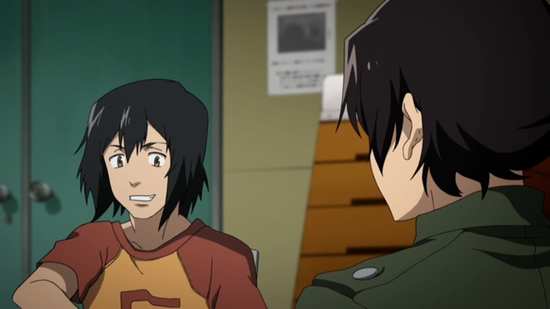 Kazé and their stupid subtitling! This is a company that still hasn’t figured out how to show multiple captions on screen at one time, either on Blu-ray or on DVD. Around episode 8 back on the Blu-ray, I got tired of seeing all these phone screens full of text, and having to infer the meaning from what the characters said out loud. I switched over to the English dub to check, and sure enough the text translations are there. It’s all the more confusing because a lot of text is translated in the Japanese version, so you might suspect that all of it is. But no, many of the text translations are in the English dub only. But, there’s no pop-up menu letting you change audio on the fly with the DVD. You have to drop out of the episode to do that, and start over again from the beginning. And of course there are no subtitles for the songs. 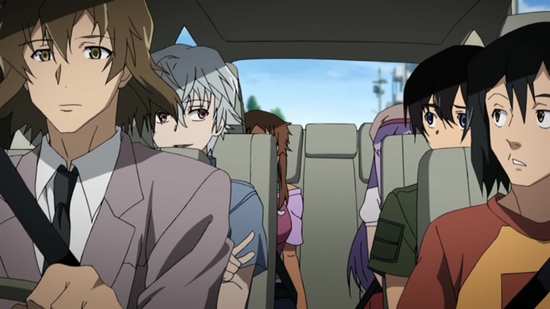 The discs present their content with animated menus, which boot up after you choose French or English.

The discs autoplay trailers for Anime Digital Network and Nura Rise of the Yokai Clan, Akame ga Kill, and Dragonball Z: Resurrection F respectively for the French menus, while disc 1 autoplays a trailer for Garden of Words before loading the English menu (the other discs boot straight to menu). 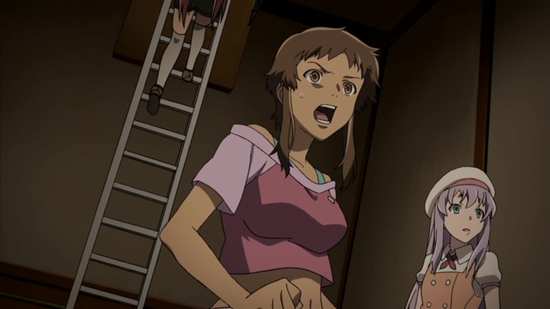 Mirai Nikki should work. It should be one of the best shows out there. After all, it’s got a fabulously perverse premise, it’s got a cast of intriguing, and mostly psychopathic characters, and it’s unrelenting in terms of the violence and sexuality, pushing broadcast sensibilities beyond breaking point, and you might expect it to trouble the censors as well (although this time around the BBFC were lenient). It’s also replete with the kind of plot twists and story diversions that normally keep viewers glued to the screen. This is the kind of show that Manga Video was built on, and Manga Entertainment thrived on. This should be manna from heaven for an anime fan that got into the medium during the cyberpunk nineties. Only it isn’t. When it comes down to it, Mirai Nikki: Future Diary is a real disappointment of a show, one which makes you question why you spent all those hours watching it, wishing you could claw them back with a reset button, just like the one at the climax of this show, although I get ahead of myself. 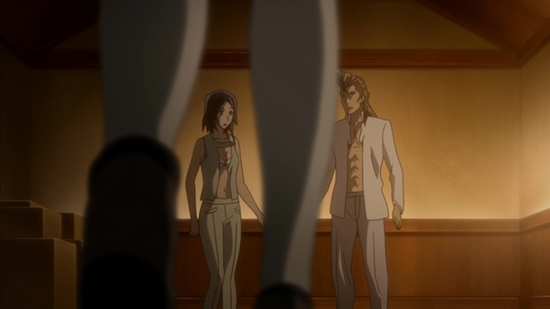 Mirai Nikki might have all of the right ingredients, but in execution it falls flat. That has to be down to the writing, which is contrived at best, putting the characters through whatever torture is required as long as the story gets told, no matter how out of character they get, and at worst the writing is wholly inconsistent, unable to maintain continuity even between episodes. The perfect example is the end of episode 19, which ends on a certain freak-out cliff-hanger, and then the start of episode 20 ignores it completely, as if it never happened. I couldn’t forgive that over a week of anticipation, but here there’s no pause at all, just one episode flowing into the next, the utter contempt on the part of the writers towards the audience made blindingly obvious. 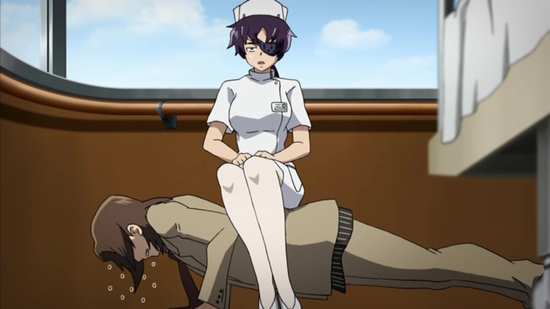 No aspect of the show is more prone to such blatant manipulation than the main character himself, Yukiteru Amano. So far in the series, he’s been the typical wimpy teen male thrust into circumstances he can barely handle, trying desperately to hold onto his sanity. Only in part 2 of Mirai Nikki, an event occurs that finally flips his switch, makes him an active, indeed proactive participant in the survival game, becoming just as unhinged and as ruthless as Yuno, a murderous Clyde to her Bonnie... occasionally. It’s as if this show is written by two scriptwriters, two people who aren’t speaking, and aren’t sending each other memos, so Yukki will be a psychopathic killer one moment, then wimpy vacillating teen male again the next, switching back and forth like Jekyll and Hyde. 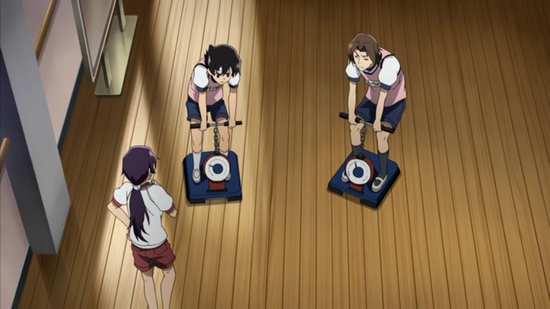 The episodes too are replete with contrivance, plot developments that are supposed to thrill, and keep you on the edge of your seat. But I would start each episode with a feeling of resignation, idly wondering what fantastic plot twist the writers would pull from their posteriors in this episode. It gets to the point where they cease obeying the rules of their own universe, with one of the 12 participants having a magic diary that lets whoever they choose have a future diary of their own. It’s like wishing for more wishes from the genie that will only offer you three. 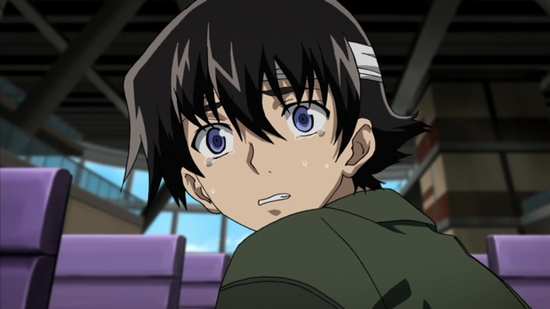 Having said all that, Mirai Nikki did grab my attention with the finale, which goes sci-fi in, what for this show is quite a nifty way. It also does a decent job in explaining just why Yuno is the way she is, cementing her as the best character in the show in my opinion, despite her being a total bunny-boiler. Alas it also has the result of offering that reset button ending for the show, a potential happily ever after for everyone despite taking a wholly nihilistic path through the storyline to this point. And even to the final scene Mirai Nikki remains a wholly schizophrenic affair snatching away that happy ending to once again let its main characters wallow in despair. 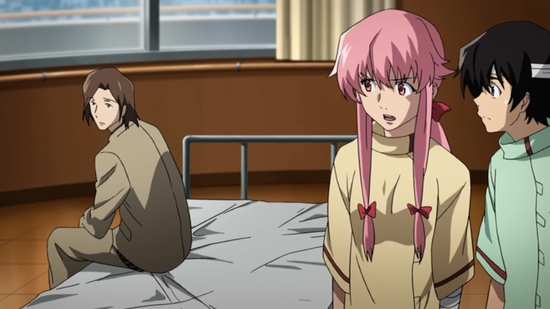 Mirai Nikki isn’t a show to enjoy, rather a show to endure. The one bright side is that in the moment, the episodes are enjoyable enough, the characters, the depraved violence of the survival game is enough to provoke a little vicarious glee in the appropriately minded viewer. That’s in the moment. The episodes don’t hang together all that well, and the series as a whole is a veritable train-wreck. But you can’t say that Mirai Nikki is boring!