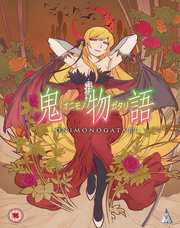 Talk about delaying the moment of pleasure! We’ve had to wait an extra month for Onimonogatari, the penultimate instalment of the Monogatari series; itself a sequel to Bakemonogatari and Nisemonogatari, but the fact of the matter is that Onimonogatari itself is a diversion on the roadmap to Monogatari fulfilment. The previous volume, Otorimonogatari began the story of Nadeko Sengoku, who for reasons explored in that release, had become a god and decided to kill Araragi. That left off at quite the cliff-hanger, but it won’t be this volume that resolves it. For that you’ll have to wait for the final volume of Monogatari, Koimonogatari. Fortunately at the time of writing, it’s still scheduled for the week after this disc is released. Onimonogatari on the other hand takes us back in time a tad, to the point where Araragi and Shinobu had just returned from their trip to the past and their adventures with a grown up (and still alive) Mayoi Hachikuji. 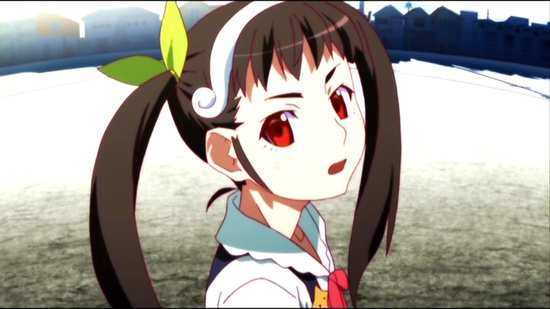 It was back to square one when they returned, with the spectral Mayoi Hachikuji once again demanding her backpack from Araragi, and this time actually getting as far as receiving it, as well as Araragi’s customary good natured sexual harassment. It’s then that the two encounter a mysterious darkness, unlike any apparition that Araragi has thus far encountered, a formless, focussed, ominous nexus that pursues them at speed across the city and it’s only the timely intervention of the shikigami Ononogi that delivers them from peril. Araragi decides to consult Shinobu, who in her lifetime as a vampire has probably encountered every apparition possible. But when Shinobu awakes, it transpires that she has personal knowledge of the darkness, knowledge that goes back 400 years to when she first visited Japan, and when she created her first minion. 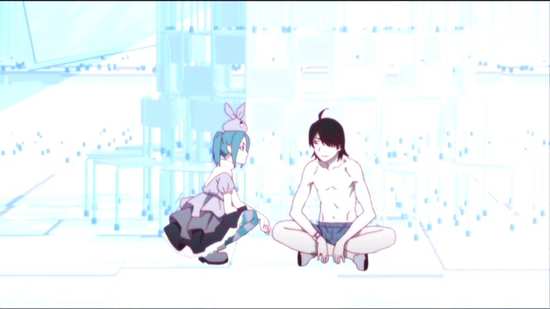 The four episodes of Onimonogatari are presented on this disc from MVM. 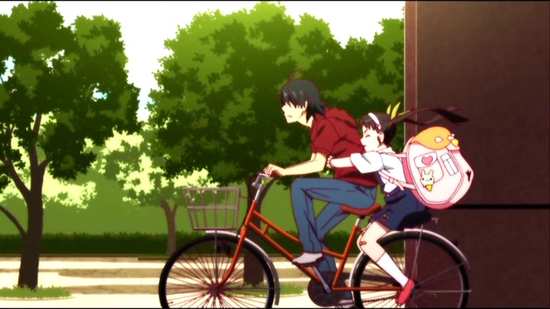 Onimonogatari gets a 1.78:1 anamorphic transfer in the native PAL format on this DVD. It’s a clear and sharp transfer, rich in detail, with smooth animation, and an absence of artefacts or obvious aliasing. It’s just the image quality you’d expect for a Studio SHAFT animation, one of the Monogatari series. Expect inventive and varied visuals, odd camera angles, lots of characters looking back over their shoulders, and of course the fan service. Also, just like the Bakemonogatari releases Onimonogatari reveals signs of edge enhancement when scaled up to a large HD screen, making the Blu-ray the obvious choice for those who are capable.

You have a simple DD 2.0 Stereo Japanese track, with a translated (white) subtitles and signs track. The subtitles are removable, should you wish to take in the imagery without it being marred. There is no English dub to this title, and dubbing that intense verbiage, all those witticisms and puns would be a colossal effort. The dialogue is clear throughout, and the stereo gives a little space for the music and action. The music too is pretty effective; I certainly appreciate the theme songs. Once again all the on screen text is translated, and you’ll spend a fair bit of time manning your pause button to get everything read.

Incidentally, the Japanese for backpack is rucksack (pronounced Ryuksack, but still recognisable) making that particular subtitle redundant for UK audiences. 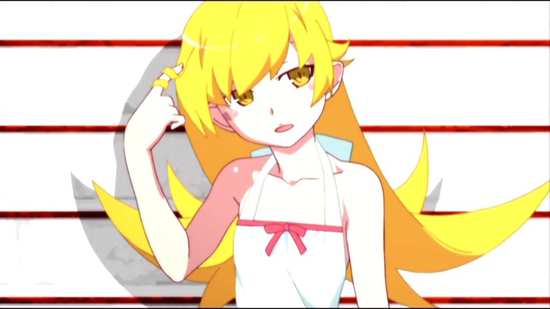 On the disc you’ll find the textless closing (the show’s opening actually incorporates its text into the animation and a textless version would be pointless).

There are 4 TV Spots for Onimonogatari, running to just over 2 minutes in total.

You’ll also find trailers for Blood Lad, Red Data Girl, Short Peace, and Problem Children are Coming From Another World, Aren’t They? These are Hanabee licenses; hence the trailers’ presence on the disc, but only Blood Lad has been released in the UK, by Anime Limited.

I would have liked Onimonogatari a whole lot more if it hadn’t been sandwiched between Otorimonogatari and Koimonogatari, two halves to a distinct story. As it is, it really does feel as if Onimonogatari is delaying my pleasure, especially as this arc isn’t all that distinctive or special. It really does just offer more of the usual when it comes to the Monogatari universe, more circumlocutions from its characters, more fan service from the animators, more of SHAFT’s distinctive animation style, and another rather mundane mystery to be solved. And given that Shinobu is supposedly the focus of this arc, her screen time feels comparatively limited. I certainly enjoyed Onimonogatari, and decidedly more so than I did the opening arc of this series, Nekomonogatari White, but Onimonogatari just wasn’t all that satisfying. 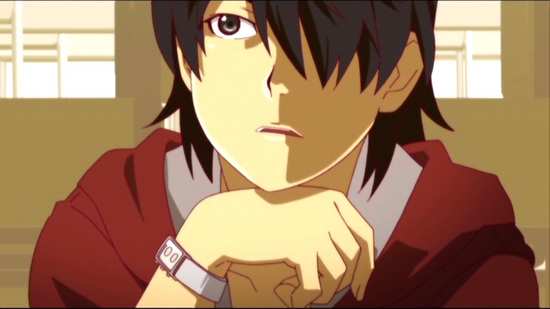 Perhaps it’s because the foe in this arc, the darkness is such a formless and anonymous menace, a foe without personality or intent that it fails to engender the same level of interest than the other challenges that Araragi had faced. Perhaps it’s because the explanation for it, the tie-in to Shinobu’s character, and the better part of an episode she spends on exposition regarding it, is all in flashback form, and feels more like a dry recitation of events 400 years past, than an involving and emotionally relevant narrative. Perhaps it’s because this is one of those Monogatari arcs that really makes its fan service moments call attention to themselves. Perhaps it’s the lack of development or sufficient back-story for one of the main characters in this arc, Izuko Gaen. Or perhaps it’s simply down to the fact that this arc signals the conclusion to one of my favourite character’s storyline. Regardless of the reason, I wasn’t as impressed by Onimonogatari. 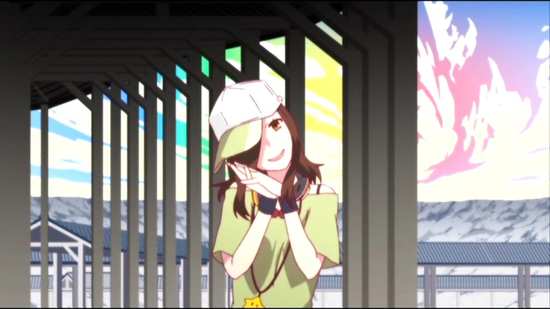 Because of the placement of the arc, it’s hard not to feel as if the show is spinning its wheels for four episodes before getting back to the actual tale of interest. Fortunately, one of the benefits of owning the series on home media is that you aren’t restricted to watching the show in broadcast order. I’ll be much happier placing this before Otorimonogatari for future watches of the show, thus enabling me to watch Nadeko’s story as one long complete arc. Of course, this deep into the franchise, Monogatari fans will already have placed their orders for Onimonogatari, and my main responsibility as reviewer at this point is to assure buyers that the disc isn’t busted, which it isn’t. Buy in confidence and enjoy.