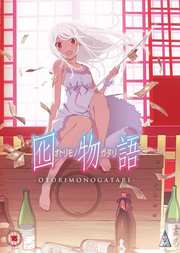 Another month, another Monogatari release. This monthly release schedule for single volume releases could be habit forming, although after years of sensible, half-season and full season boxset releases, it’s very much a bad habit. It bears repeating that it’s down to the dictates of Aniplex in Japan, not a decision made here locally by MVM. The second Monogatari season got off to a rocky start for me with Nekomonogatari White, but it well and truly got back on track with last month’s Kabukimonogatari, so I find myself looking forward to the next instalment, hoping that Otorimonogatari can continue to deliver the goods. Although when the show begins it looks like it’s already over... 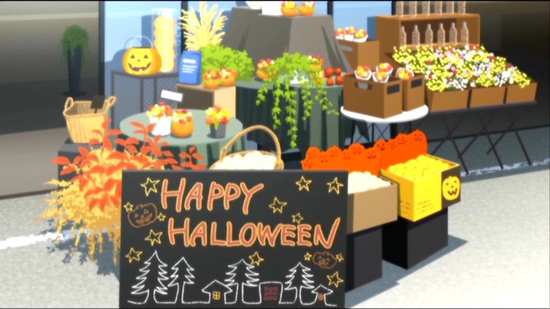 We catch up to Sengoku Nadeko, who’s undergone a bizarre Medusa-like transformation. She’s all red-eyed and with white snakes replacing the locks of her hair. She’s at the shrine, and she’s about to fight a bloody and battered Koyomi Araragi and the diminutive vampire Shinobu to the death. What could have brought about such a dire state of affairs? It all began when Nadeko started seeing snakes in her everyday life. It isn’t the constricting problem she had before, these white snakes are pretty harmless if unsettling, but they are the harbinger of an encounter with a larger, more ominous spirit, Kuchinawa. But all Kuchinawa wants is for Nadeko to help her find his corpse. But given how much of an insight Kuchinawa has into Nadeko’s personality, she’s reluctant to ask for Araragi’s help to deal with it. She decides to handle it herself. 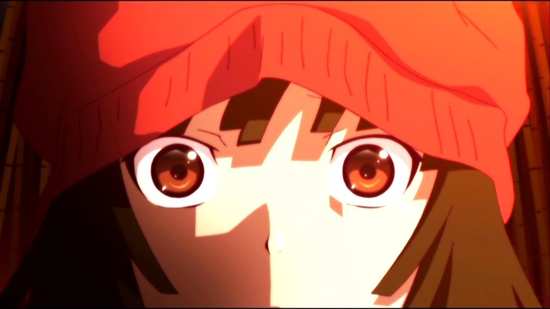 The four episodes of Otorimonogatari are presented on this dual layer disc from MVM thus. 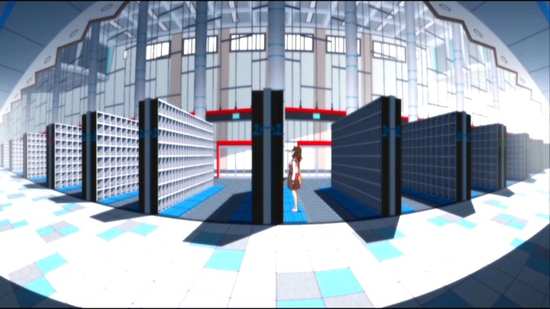 Otorimonogatari gets a 1.78:1 anamorphic transfer in the native PAL format on this DVD. It’s a clear and sharp transfer, rich in detail, with smooth animation, and an absence of artefacts or obvious aliasing. It’s just the image quality you’d expect for a Studio SHAFT animation, one of the Monogatari series. Expect inventive and varied visuals, odd camera angles, lots of characters looking back over their shoulders, and of course the fan service. Also, just like the Bakemonogatari releases Otorimonogatari reveals signs of edge enhancement when scaled up to a large HD screen, making the Blu-ray the obvious choice for those who are capable. 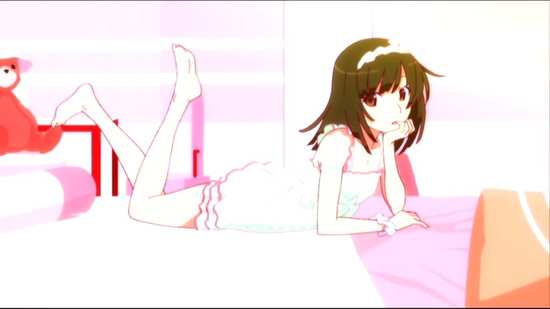 You have a simple DD 2.0 Stereo Japanese track, with a translated (white) subtitles and signs track. This time the subtitles are removable, should you wish to take in the imagery without it being marred. There is no English dub to this title, and dubbing that intense verbiage, all those witticisms and puns would be a colossal effort. The dialogue is clear throughout, and the stereo gives a little space for the music and action. The music too is pretty effective; I certainly appreciate the theme songs. Once again all the on screen text is translated, and you’ll spend a fair bit of time manning your pause button to get everything read. 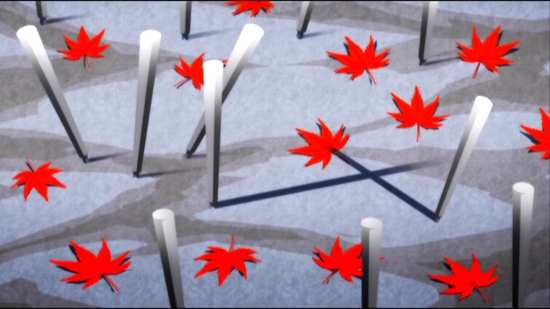 The disc presents its content with a static menu screen.

You’ll find the Clean Opening and the Clean Closing in the extras, 2:34 of TV Spots for the show, along with trailers for Patema Inverted, Valvrave the Liberator, Fate/Kaleid Liner Prisma Illya, and Short Peace.

By far the most substantial extra is the Omnibus 3 episode. This time it’s the turn of Nisemonogatari to get summarised, after a 30-second recap of Nekomonogatari Black. Unsurprisingly given Nisemonogatari, the bulk of the recap is devoted to Karen Bee, with a little time left over for Tsukihi Phoenix. Surprisingly however, they leave the tooth-brushing scene out this time. 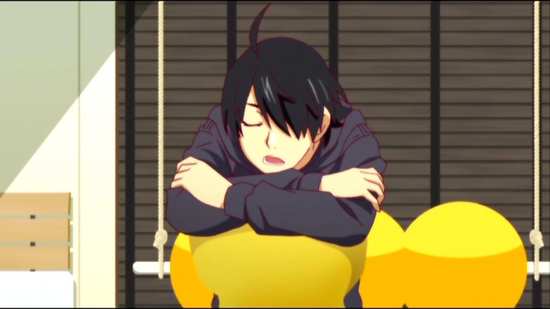 It’s here that the single volume format for Monogatari Season 2 starts to bite. Nekomonogatari White and Kabukimonogatari were single stories, arcs complete in and of themselves which could conceivably justify the single disc treatment. But with Otorimonogatari, you get the start of a story which won’t be resolved until the final arc of the season, Koimonogatari, and you really do wish that it was all out in one go, especially as the next arc, Onimonogatari takes a step back in the narrative to tell a story set just after the events of Kabukimonogatari, and leaves this story on the backburner for four episodes. Don’t worry, you’ll figure it out as the series unfolds. 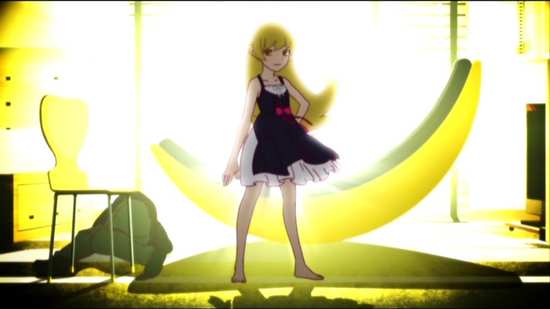 We start at the end of Otorimonogatari, with Nadeko Sengoku having become a vengeful god, and about to lay some permanent if not fatal damage on Koyomi Araragi and Shinobu Oshino, before flashing back to the start of the arc, which unfolds over the course of four episodes. And it’s all about the main character, Nadeko Sengoku, the middle school girl, friend of the Fire Sisters Tsukihi and Karen Araragi, and hopelessly in love with their big brother Koyomi. At the start of this arc, she’s just been rescued by him from her snake curse, but the aftermath of that trauma hasn’t faded, certainly not the effect of those false charms on her classmates in school. 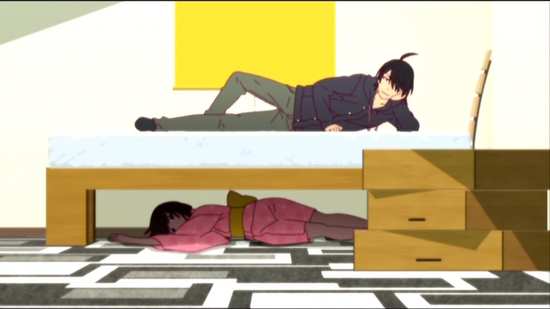 Otorimonogatari is really a character study of Nadeko Sengoku, and the people she meets, the characters she encounters all wind up pointing out the flaws and annoyances in her personality. After all, she’s hopelessly crushing on Araragi, but it’s always going to be an unrequited love when it’s the big brother of her friends. She also tells herself that she’s happy with that, loving him from afar, but it’s pointed out that she’s just using that as a sanctuary, as a way of deflecting interest from other boys. What’s really unveiled is a deep seated lack of self-esteem, a girl who hides from the world behind her bangs, and who would rather apologise off the bat than actually engage with what people really say. 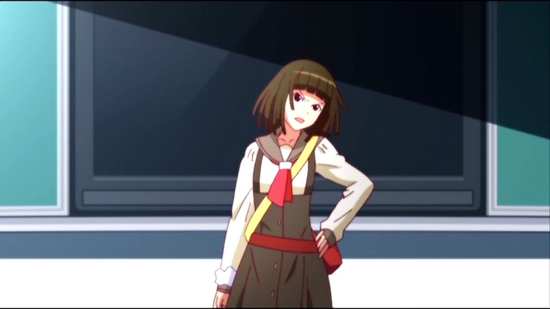 That kind of attitude is bound to cause a strain, and there comes a point in the story where her meek, defensive personality just snaps. I have to say it’s a high point of the story to see her turn full delinquent against the teacher and the class that take her for granted (she got elected class representative because no one else wanted the job), but unfortunately that isn’t sufficient catharsis; it only gets worse. The crux of the matter is her unrequited love for Araragi. Love someone too much without response and that love can turn to resentment, it can turn to hate, and all it needed in Nadeko’s case was a tipping point. That tipping point comes when she sees Araragi with his girlfriend. 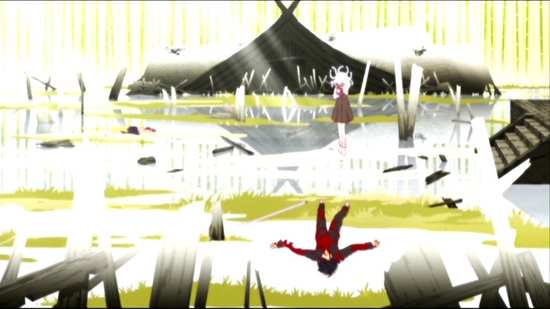 At this point in the review, you’re probably wondering what all the snakes are about, who Mr Kuchinawa is, and why he wants Nadeko to find his corpse. That’s the really cool bit about Otorimonogatari, the way that Nadeko’s character development is tied into this strange supernatural ophidian tale. It’s a deftly written and woven storyline, the kind of character development and story revelation that reminds me of the movie Memento, the kind of story that makes you want to go back and watch it again from the beginning to see how what you learned about the character actually drives the story, instead of what you think did. 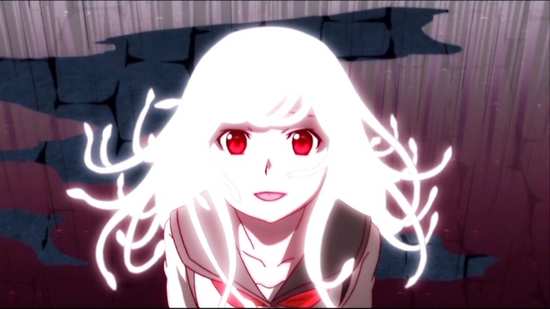 Otorimonogatari ends on a pesky cliff-hanger, which will be resolved in the final arc of the season, Koimonogatari, with the Hitagi End episodes. But Otorimonogatari is the kind of story arc that makes you want to watch that conclusion even more.