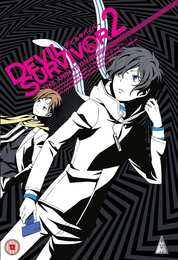 I know what you’re wondering right now. You’re wondering where you can get Devil Survivor 1. After all, who wants to watch a sequel without seeing the original first? It turns out that there is no Devil Survivor 1, at least not in anime form. The Devil Survivor franchise began life as games on the Nintendo DS made by Atlus, the same people behind the Persona franchise (You can be forgiven for getting the odd Persona 4 flashback while you watch this show). It was only Devil Survivor 2 that got the anime adaptation treatment, so you can buy this series safe in the knowledge that you aren’t missing out on anything important. The real question is, will you be missing out if you don’t buy this show at all? 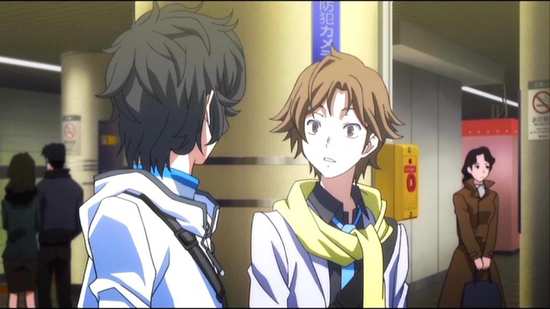 The end of the world is nigh. It was just another normal day for high school students Hibiki Kuze and Daichi Shijima. Well, normal aside from a new fad that was spreading around people’s smartphones, that of a prognostication of death, an app that relays the video of the demise of someone close to the owner of the phone. And just before they venture into the subway, they get a Dead Face clip of Hibiki. And sure enough, suddenly the earth quakes, the roof falls in, and an oncoming train crashes. 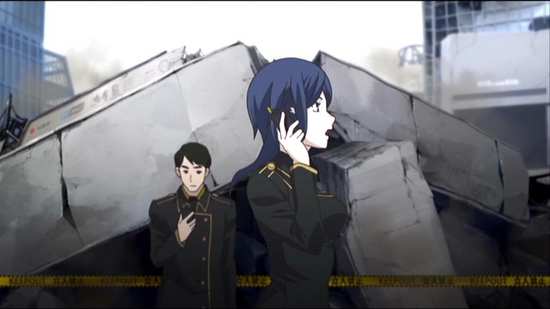 The difference is that Hibiki and Daichi get a do-over. A voice offers them a second chance if they choose to install a demon summoning app onto their phone. Naturally they accept, and are restored to life, along with Io Nitta, a girl who was also on the subway platform. Outside it’s like hell has come to Earth. This is no ordinary disaster, as now demons walk the streets, and no-one is safe. But Hibiki, Daichi and Io have the demon summoning app with which they can call forth powerful beings to do battle on their behalf, and Hibiki’s calling forth one of the most powerful demons of them all. That brings them to the attention of the JPs group, a secret society that has long been anticipating this day. The JPs’ enigmatic leader, Yamato Hotsuin tells them that the world will end in seven days, unless they defeat the seven Septentrions that will herald the apocalypse, and seeing the calibre of demon that Hibiki can summon, they’ve just been recruited. But Yamato Hotsuin is hiding secrets of his own, and there are unanswered questions, such as who installed the demon summoning app to their phones in the first place? 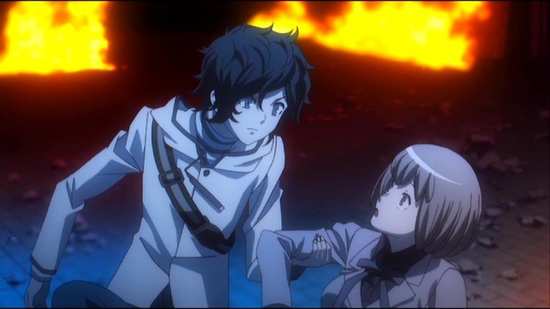 Thirteen episodes of Devil Survivor 2 are presented across 2 discs from MVM. 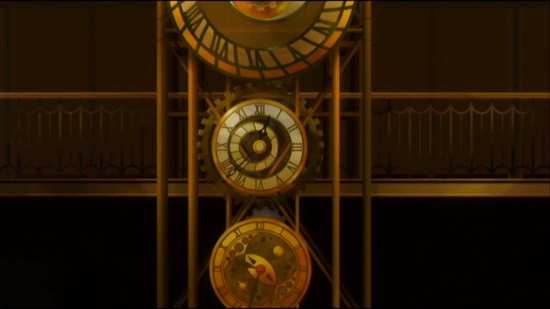 Devil Survivor 2 gets a perfectly serviceable 1.78:1 anamorphic, native PAL transfer, which I assume has come via Australia’s Hanabee Entertainment, as so many of MVM’s titles do these days. The image is clear and sharp, detail levels are high, and the admittedly subdued colour palette comes across to good effect. The character designs are fairly generic, but the animation is strong, while the world design gets a fair bit of detail. The real effort goes into creating the demons, both those summoned by the heroes, and the gargantuan enemies that they face. Incidentally, there is no Blu-ray release for this title in English speaking territories. 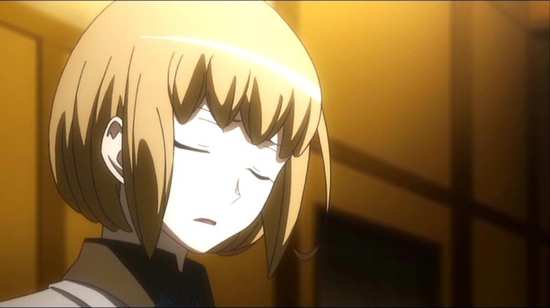 Devil Survivor 2 offers you the options of DD 2.0 English and Japanese, with optional translated subtitles and a signs only track. The subtitles aren’t overscan friendly, if you’re still watching on a CRT TV, and there is a lot of onscreen text to translate, particularly during the mid-show eyecatches, so a fast finger on the pause button is necessary. The Japanese track is adequate, if cast with some very generic voices, hitting the anime cliché buttons with every effort. I gave the English dub a try, and 20 seconds of the beginning of episode eight was enough to convince me that this dub should have been drowned at birth, a new nadir for Sentai Filmworks. 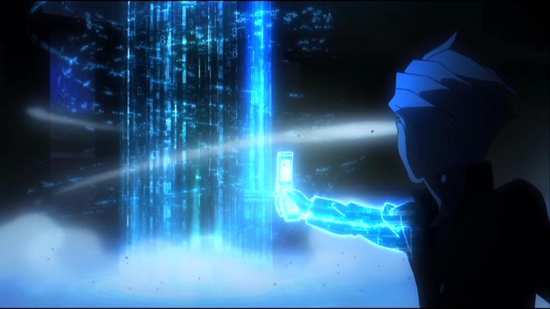 Devil Survivor 2 presents its contents with static menus. Each episode is followed by a silent, white text on black translated English credit reel.

The extras on disc 2 amount to the usual textless credits, but there are 10 textless openings, and 6 textless endings. I only skipped through them, but I did notice that the start of textless opening 8 had glitched audio. 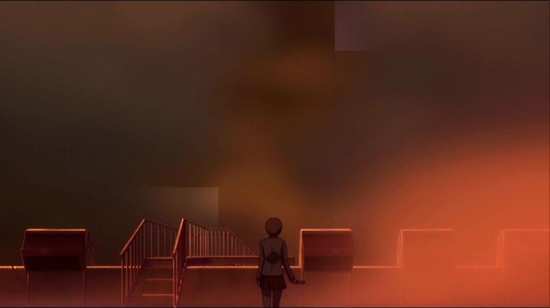 Once in a while a show comes along of such mediocrity, so disappointingly predictable, that it fails to motivate even the slightest interest in expounding on its limited virtues, and its copious flaws. I have to convey an opinion on Devil Survivor 2 and the temptation is to simply write ‘Blah, Blah, Blah’ and be done with it. It’s a Blah show! It’s what you get when you cross Persona 4, a show I loathed in the first place, with Neon Genesis Evangelion, a show that has been referenced, homaged, and ripped-off far too often since it was first released. The problem is that the story is so mundane, the scripting so clichéd, that it comes across like half a hundred other production line anime, made all the more tedious because it’s a video game adaptation, and we simply have to sell that software. So whip out those mobile phones, install the app, and summon those CGI demons like there’s no tomorrow, so they can battle each other for the fate of the world. 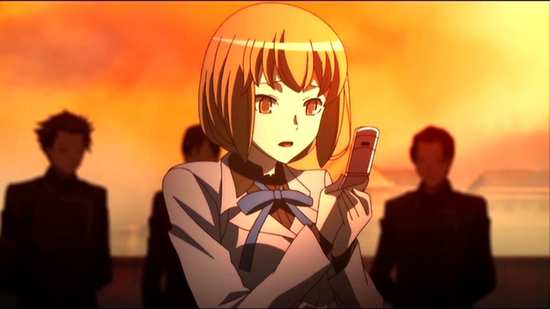 There’s no parallel world accessible through TV screens here though, it all takes place in the ‘real’ world, albeit one that is seven days away from ending. There’s nothing that any army, navy, air force, or government can do about it. But a teenager running a secret organisation that recruits other teenagers with the right aptitude to summon demons can. Yamato Hotsuin is the Gendou Ikari of the show, haughty, aloof, jumped-up-twerp, overuses the word ‘irrelevant’ to show how superior he is, and is generally an annoying brat. He knows how to save the world, it’s to remake it in his own image, and that means ignoring the rest of the planet, just making sure his plan goes perfectly. This causes our hero, Hibiki Kuze, no end of consternation and soul searching, as he weighs saving the world against Hotsuin’s cold-hearted leadership. All of this could have been avoided if he’s just smacked some sense into him at the start. 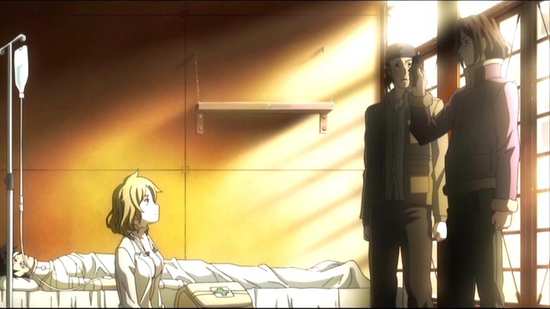 The characterisations are pretty lame, one-dimensional and hackneyed. We have our Gendou and Shinji analogues in Yamato and Hibiki. Hibiki’s best friend Daichi is the comedy sidekick, unable to summon any but the weakest of demons. Io Nitta is the booby cute love interest, there’s a girl called Airi whose love of a certain foodstuff is her sole motivation, and her obnoxious attitude is taken out on her strong and silent type partner, who knows how to cook this stuff. There’s a mad scientist type with no social skills, there’s the lieutenant irrationally devoted to Yamato, and I feel tired just recounting this stuff... 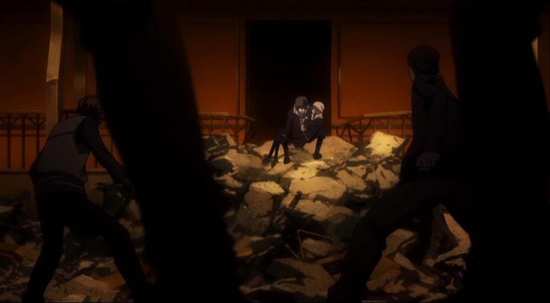 Anyway, seven days till Third Impact, each day will see a new Angel appear in Japan, and each day the Evas will have to go and defeat the Angel. Only after all seven are defeated will the world be saved. Let Third Impact = End of the World, let Angel = Septentrion, and let Eva = Demon Summoners. 20 Goto 10. And remember how it turned out not to be as simple as all that in Evangelion, how Gendou was following his own agenda? The same goes for Yamato Hotsuin. There’s even a friendly Septentrion floating around to confuse matters. 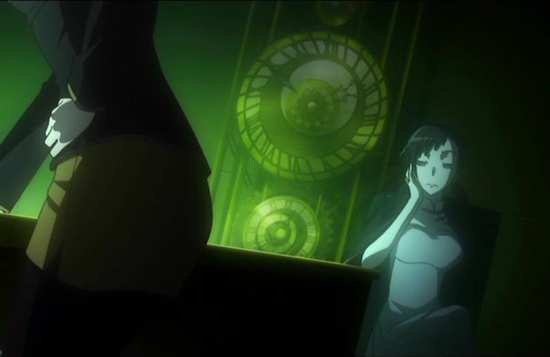 I didn’t think that this show could be worse than Persona 4, but it really is. It’s pretty to look at to be sure, they don’t skimp on the animation or the production values, but the story is weak, the characters weaker, and it’s all so predictable and recycled. Even if you haven’t seen it before, you’re seen it all before.