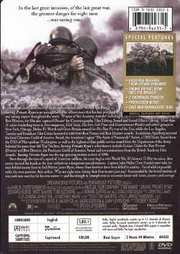 DVD
Catch Me If You Can (UK)

DVD
Patriot, The (US)

DVD
Haunting, The (US)
Related Articles 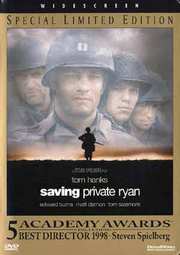 Synopsis:
Internationally acclaimed by critics and audiences alike, Steven Spielberg`s Saving Private Ryan is an unforgettable film achievement that has had profound and lasting impact throughout the world. Winner of five Academy Awards including Best Director, the film also captured Oscars for Cinematography, Film Editing, Sound and Sound Effects Editing. More than 70 critics and critics` groups in New York, Chicago, Dallas Ft.Worth and Great Britain named the Best Picture of the Year, while the Los Angeles, Toronto and Broadcast Film Critics honored it with both Best Picture and Best Director awards. In addition, Spielberg received his third Directors Guild of America Award, the American Legion "The Spirit of Normandy" Award, a USO Merit Award from the USO of Metropolitan Washington, as well as the highest civilian public service award from the Department of the Army. Selected for more than 160 Top Ten lists, Saving Private Ryan`s other honors include Golden Globes for Best Picture and Best Director, the Producers Guild of America Award and ten nominations from the British Academy Film Awards. Saving Private Ryan was the top-grossing motion picture of 1998.

Seen through the eyes of a squad of American soldiers, the story begins with World War II`s historic D-Day invasion, then moves beyond the beach as the men embark on a dangerous special mission. Captain John Miller must take his men behind enemy lines to find Private James Ryan, whose three brothers have been killed in combat. Faced with impossible odds, the men question their orders. Why are eight men risking their lives to save just one? Surrounded by the brutal realities of war, each man searches for his own answer - and the strength to triumph over an uncertain future with honor, decency and courage.

Saving private ryan
Video: The transfer is excellent and the colours, both rich and full.
The only problem with this part of the disc was the layer change which took the best part of 1 second to read.

Audio: The dolby digital sound track was fantastic. If you closed your eyes you where on the beach with the soldiers. The rear effects have you looking over your shoulder and ducking for cover behind your sofa.Each shell that went off had you thinking your roof was going to dissapear at any moment. Even the more subtle scenes in the movie were well balanced.

Features: A special message from S.Speilburg, i found a tad disappointing, just a bit of waffling on about a D Day museum in New Orleans. The documentary, into the breach, i found to be very informative. There were also a couple of trailers from this movie.

Overall: This is a fantastic movie well directed. One of those rare movies where you are rivited to your seat for the whole thing. One thing to add `this movie is not for the faint hearted`.
posted by Rob Kiff on 3/11/1999 11:17
10 / 10

If you require realism in action packed films, then you must like this war story. Based upon a true incident in World War 11, Stephen Spielberg`s style of filming using hand held cameras much of the time hit the sets much like a newsreel cameraman following soldiers into battle and witnessing them falling wounded and dying with explosions going off around you making the carnage almost real.This excellent production depicts how unglamorous war is and heightens the senses to the look and the sounds and even the smells of what combat is really like and the ultimate sacrifice paid for by the unlucky victims of war.SAVING PRIVATE RYAN a film for men and women to reflect on. (10 out of 10).
posted by John F on 3/1/2000 18:37
10 / 10

The Dolby 5.1 track is one of the most agressive and dynamic I have ever heard.The first 24 minutes can cause some serious ear damage.

Extra`s include an excellent 25 minute documentary,a message from Spielberg,and the trailer.
posted by Adam Morrison on 28/8/2002 06:01