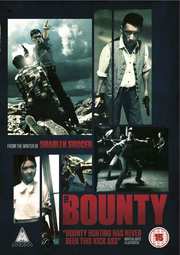 This isn’t the Mel Gibson and Anthony Hopkins Mutiny movie; this is instead MVM’s first live action release for 2014. In recent months MVM have opted to release a fair few Thai martial arts flicks, but The Bounty promises something a little more esoteric, a movie that I’ve seen described as a Hong Kong Clouseau movie. That was enough to get me signing up on the reviewer dotted line. It’s also written and directed by the writer of Shaolin Soccer.

Cho is a bounty hunter always after the big score, but has been somewhat hampered by his lack of ability. But he is persistent, and nothing will stop him from getting his money, except the promise of an even bigger score. It’s only the promise of a $400,000 bounty in Hong Kong that shifts him from his current determination to be paid for finding a priceless, I mean worthless pet dog. Lee Kin Fai is a petty robber whose last crime went tragically wrong, and he ran to Hong Kong. A sole clue links him to the Lazy Inn in Hong Kong, and Cho decides to check in for a few nights and take a look around.

But the Lazy Inn is a pretty odd place, frequented by some bizarre characters, and with an apparent history of client suicide on the premises. That’s one reason why the staff takes an aggressive interest in Cho’s state of mind. But their own states of mind bear further examination. The owner of the inn, Suen certainly seems happy enough, although he’s posted an extravagant reward for his missing daughter. Only his daughter Linda works at the inn as a maid, a fact that he refuses to acknowledge. Linda seems normal enough, except for an overactive imagination and a tendency to fly off the handle. And Coconut Boy, the local coconut milk delivery man, bucktoothed, hirsute, pot-bellied, and cowardly worships the ground that she walks on. And the local area is being terrorised by the newest gang in town, the Sugar Cane gang who’s set up a protection racket. Between dealing with the thugs, and convincing his hosts that he’s not actually suicidal, Cho may not have the time to seek out one petty fugitive.

The Bounty gets a 2.35:1 anamorphic transfer, native PAL on this disc, which is clear and sharp, with only the odd moment of moiré on fine detail really worth complaining about. It’s a film with rich colours and a really appealing production design, and that comes across well on this disc. Audio comes in DD 5.1 Surround and DD 2.0 Stereo Cantonese, with optional English subtitles. The surround works to give the film space, although it really focuses mostly on the film’s music. The subtitles are timed accurately and free of typographical error. The disc presents its contents with a static menu screen, and the sole extra features are trailers for The Kick, The Sword Identity, and Bangkok Assassins.

The Bounty is a bit of an awkward film, difficult to categorise. It starts off as a slapstick comedy, but veers back and forth between romance, tragedy, action, and it even gets depressingly dark at times. It’s disjointed and uneven of tone, and its character development is dictated by the vagaries of the script, rather than vice versa, leaving some character transformations a little hard to swallow. It also tries to squeeze 2½ hours worth of plot into something like 1½ hours, and something has to give. It’s a frustrating and at times un-engaging film to watch. It’s also a great deal of fun, and when the comedy and characters click, which they do regularly in this film, it’s a genuinely laugh out loud affair.

It’s Chapman To as the Bounty Hunter Cho who somehow holds this film together, creating a genuinely engaging character, often nonplussed and out of his depth, but still possessing sufficient street smarts and talent to be believable in the role. He faces the absurdities in this film, and it is a film replete with absurdity, with a misplaced dignity that somehow makes the situations even funnier. Fiona Sit as Linda really provides able support, creating a quirky but genuinely likeable character that is slightly off the edge of the normality scale, and the two have great chemistry together.

The Bounty is a collection of memorable moments, little gems of comic scripting, and devilish timing that light up the screen. I certainly won’t forget the wanton abuse of sugar cane in this film, while hypoglycaemia and strawberry lip gloss will forever go together in my mind from now on. Unfortunately this time, The Bounty is a film that is less than the sum of its parts. There are moments which are surprisingly dark and of awkward tone, which really don’t belong in this story, and they are moments that threw me out of the experience, leaving the film working to pull me back in again. But when The Bounty does work, and it hits the right notes so very often during its runtime, it offers some of the best Hong Kong comedy cinema I have seen in a long time.