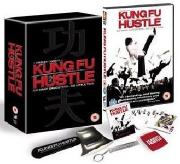 Synopsis:
From walking disaster to Kung Fu master: it's a new comedy unlike anything you have seen before!

In the 1940's Chinese province of Guangdong, petty thief Sing (Stephen Chow) aspires to become a member of the notorious Axe gang, the fiercest, cruel and most widespread crime syndicate in the city. However, Sing is just a street rascal (trying to ignore the fact that his heart is actually in the right place) and so he ventures into the run-down Pig Sty Alley to prove his worth.

However, in attempting to extort money from the hairdresser Sing unwittingly exposes the plump landlady, her hen-pecked husband, the camp tailor and rugged coolie as martial arts masters in hiding. Coming to the attention of the Axe gang who want to clear out the apartments, Sing's actions have set off a relentless chain of events that brings the clans together in an explosive battle!

Stephen Chow continues his unique comedy style that first came to the attention of the West in 'Shaolin Soccer', mixing slapstick in the finest tradition of Buster Keaton; to marvellous martial arts choreographed by none other than Yuen Woo-ping (The Matrix, Kill Bill); to dance sequences with tuxedoed gangsters; to moments of genuine pathos concerning Sing's mysterious history involving a beautiful mute lollipop vendor...