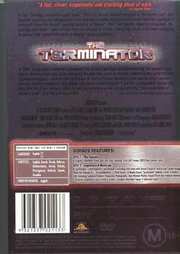 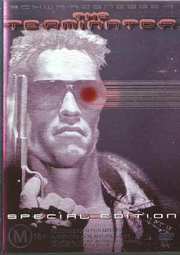 Synopsis:
In 2029, giant super-computers dominate the planet, hell bent on exterminating the human race! To destroy man`s future by changing the past they send an indestructible cyborg - a Terminator - back in time to kill Sarah Connor (Linda Hamilton), the woman who`s unborn son will become mankind`s only hope.

Arnold Schwarzenegger is perfectly cast as the fiercest and most relentless killing machine ever to threaten the survival of mankind! This fast paced, cleverly conceived adventure fires an arsenal of thrills, intriguing twists and heart-stopping suspense that never lets up for a minute.

At last this disc comes out and what an improvement. The video transfer is excellent, they`ve done an brilliant restoration to this 17 year old film. It also gets an DD5.1 audio track that improves the film. There are also two documentarys included which gives you a real insight into the film, like towards the end of shooting they had hardly any money left to employ wardrope people so Arnie had to keep his gear in the boot of his car, also the terminator was going to played by O.J. Simpson but according to Cameron in 84 "people wouldn`t have believed a nice guy like O.J. playing a part of a ruthless killer" little do they know then! Also included are trailers for the movie, deleted scenes including one which shows employes of Cyberdyne Systems finding the microprocessor of the first terminator at the factory.All I can say is get this DVD you won`t regret it.
posted by David Garner on 13/3/2001 23:00
8 / 10

First off the bat, I would like to mention that I have seen this movie so many times in my short life and prefer this movie to the over-long sequel.

The picture is pretty good, I suppose. The picture won`t win any awards, there is some grain and dirt on it but the overall quality is good, miles better than the VHS version.

The sound is dated but great. Love the retro 80`s music, and overall the pounding beat is`nt that bad.

The movie itself is quality and just the right length. The special effects however have aged terribly and really look shoddy now.

The extra features aren`t bad either, I found the documentarys very interesting, well maybe just the longer one. The usual extras are all present.

The film tells the story of an apocalyptic war between the human race and the machines we created. Sometime in the late 1990s a computerized strategic defense network, called 'Skynet', is trusted to control the American nuclear arsenal. Unfortunately, at least for the human race, Skynet becomes self-aware and decides to eradicate all human life on the planet. To this end it begins a global nuclear war, a war that results in the total annihilation of two thirds of the global population. From the ashes of the nuclear fire rises the first of the machines, built in automated factories for one purpose: to hunt down and eliminate the remaining humans. The newest of these machines are the Terminators, infiltration units that are part man and part machine. These unstoppable cyborgs are able to blend in seamlessly with other humans, feel no pity or remorse and will not stop until they have accomplished their mission.

However, all is not lost for the human race. One man, John Connor, emerges as leader of the future resistance. Under his guidance the human race is able to organise, to fight back at the machines and ultimately to defeat them. Skynet realises that it has all but lost the war, and that killing Connor now would have little or no bearing on the outcome. In order to succeed it must eradicate all trace of John Connor's existence. To this end Skynet sends a Terminator back through time to the year 1984, in an attempt to kill John's mother, Sarah, before John himself has even been conceived. The resistance learns of the plan and sends a lone soldier back to protect Sarah from the Terminator. What follows is a race against time to see which of the time travelers reaches her first, with nothing less than the future of the human race hanging in the balance.

The Terminator is presented in its theatrical ratio of 1.85:1 and is anamorphically enhanced. Considering the age of the film the image quality is excellent throughout. It's not in the league of T2, nor could you expect it to be, but it is a great transfer nonetheless. If you have been watching on VHS the difference will blow you away. The image is slightly grainy throughout, but as I've already said, the fact that this film is almost two decades old now makes this understandable. Special effects obviously look very dated, as do the 80s hairstyles and the like, but the filmmakers did a good job with the budget available.

The Dolby Digital 5.1 track is very good. Obviously the original feature wasn't shot with this type of audio in mind, but the mix is suitably pleasing to the ear. Surrounds are used to good effect, and the dialogue is always clear. The omission of the original audio track could be a minor irritation for those purists out there, but the 5.1 mix really does sound great.

Extra features are plentiful, although not in the same league as T2. The material that is on offer is of a high standard and features several documentaries, interviews with Arnie and James Cameron, a stills gallery, trailers, TV spots, the original screenplay and deleted scenes. Some of these scenes are great; I especially like the one that shows the aftermath of the climactic battle in the factory and it sets us up nicely for Terminator 2. The disc also features DVD Rom content. As with the T2 disc the menus are all animated and look excellent.

The Terminator is a classic film that deserves to be part of anyone's collection. It has a good storyline, features some solid performances and has great special effects (if you consider the age of the film). Arnie is perfectly cast as the Terminator, especially as he doesn't say much (usually a bonus as far as his acting is concerned). This double disc set offers almost everything a devoted fan could ask for (except a commentary track) and comes highly recommended.
posted by Chris Gould on 21/12/2002 02:10