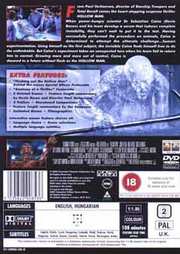 Back Cover of Hollow Man

DVD
Tailor Of Panama, The (UK) 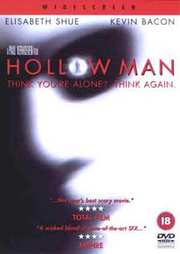 Synopsis:
After years of experimentation, Dr. Sebastian Caine, a brilliant but arrogant and egotistical scientist working for the Defense Department, has successfully transformed mammals to an invisible state and brought them back to their original physical form. Determined to achieve the ultimate breakthrough, Caine instructs his team to move on to Phase III: human experimentation. Using himself as the first subject, the invisible Caine finds himself free to do the unthinkable. But Caine`s experiment takes an unexpected turn when his team can`t bring him back. As the days pass, he grows more and more out of control, doomed to a future without flesh as the Hollow Man.

For me an overall opinion on Kevin Bacons film highlights. This is the first film he has a good part playing the bad guy. If that makes sense?Columbia do another good job creating a good solid disc. The film is a good steady piece of technology and genre. Paul verhoeven has to have directed his better film yet as starship troopers was an "Alien" copy not at all impressive. I think the extras are good enough for a DVD collector and the picture crystal sharp. Sound through your HI-FI will be pumping.
posted by D.stent on 31/8/2001 15:59
3 / 10

Good print and plenty of extras, not that you would be much interested as the film is a strictly by the numbers wasted oppotunity
posted by Richard73 on 8/9/2001 20:54
9 / 10

I`ve only had a DVD player for a few days now but took a chance on Paul Verhoeven`s latest, Hollow Man, and so far have found it a worthwhile purchase.

I say "so far" because after having seen the film through to its conclusion, it`s taking me a while to plow through all the extras, a good mix of commentaries (including Kevin Bacon, Jerry Goldsmith and Paul Verhoeven), deleted scenes, and "making of" snippets.

While the film itself is no masterpiece, it`s entertaining enough, but the extras really make this DVD a value for money purchase, giving you a real incisive look at the film production process from start to finish.
posted by Mad Uncle Simes on 8/9/2001 23:13
5 / 10

This is a major letdown from Paul Verhoeven. After the sublime excesses of Starship Troopers we are brought down to earth with this strictly by the numbers invisible man thriller. The premise is wonderful and the first half of the film seems to be exploring the idea of invisibility in some depth, scenes are tense and the acting is OK. However the film degenerates into just another slasher movie and my interest was lost.
Extras are OK, the isolated score is good and Verhoeven never shuts up but the behind the scenes stuff is just an extended EPK which adds nothing to your understanding of the film except as an SFX bonanza.
posted by CaminoReal on 14/9/2001 14:37
9 / 10

MOVIE: Hollow Man isn`t really your typical Paul Verhoeven movie; yes, it contains a certain amount of nudity and violence, but not to an excessive degree as usual. Many critics slated Hollow Man for different reasons; some because of it`s `cliched` second half, others because of the gratituous nudity etc. In my opinion, Hollow Man isn`t as bad as everyone makes out. Yes, it is essentially a no-brainer popcorn movie and a special effects vehicle, but still highly enjoyable. For those who don`t know, Hollow Man is an invisible man movie, which is a far from original concept in itself, but is definately the best one ever made. The main cast includes Kevin Bacon, Josh Brolin and Elisabeth Shue, who star as scientists working on an invisibility serum for the Pentagon. They have already managed to make animals invisible (such as dogs and gorillas) and bring them back to normal, but not humans. Sebastian Caine (Bacon) becomes the first human test subject and is sucessfully made invisible, but cannot be brought back to normal until the perfect serum has been developed. Eventually, being invisible drives Caine mad and he begins taking advantage of the other female scientists before trying to kill everyone related to the project. I had to admit that that the ending was the weakest point of Hollow Man, which I won`t spoil for you, but the special effects make up for any storyline flaws. Definately recommended if just for the amazing `transformation` sequences.
PICTURE: 1.85:1 Anamorphic
A film such as this with 500+ special effects shots is thoroughly enhanced by a grain free, immaculate transfer.
The many visual highlights include invisibility transformations, the swimming pool sequence and the thermal imaging POVs.
SOUND: Dolby Digital 5.1 (English and Hungarian).
The sound is very pleasing with solid, well placed dialogue, excellent sound effects and a brilliant sounding Jerry Goldsmith score. The rears are constantly used, especially in the invisibility scenes where Bacon`s character walks to the sides and behind the other cast members. As he speaks, you can work out his position from which speaker is utilised. Excellent!
EXTRAS: A good range of extras are available, although not quite enough to warrant a two-disc set. There is a 15 minute `making of...`, 15 special effects behind the scenes features, deleted scenes, trailers and two audio commentaries. The first is by Verhoeven, Bacon and Andrew Marlowe (screenwriter) and the other is the isolated score with comments from Jerry Goldsmith. All are very entertaining and provide a much needed look at how the effects and such were achieved.
OVERALL: A very comprehensive package from Columbia/Tristar with special effects and transfer quality to die for.
posted by Richard Knowles on 17/9/2001 04:10
7 / 10

I do think they missed the opportunity to have more fun with the invisibility; they only use it for one joke (a scene where Bacon`s character scares some kids at a set of traffic lights), I suppose this has been done before in Memoirs of an Invisible man, but I`d still liked to have seen more. I suppose with Verhoeven he`d prefer it to have more nastiness. I`m not easily offended but the rape sequence was rightly cut down.

A bog standard featurette and then another one which tells you a bit more and is fairly interesting.
A commentry with Verhoeven, Bacon etc...
Verhoeven comments on some deleted scenes including the rape sequence as mentioned above.
posted by Rich_H on 3/9/2002 20:09
7 / 10

This was the first DVD I ever bought. I wanted to buy one that showed me the true capabilities of DVD and seeing as "Hollow Man" was only released a week before I was sure I was seeing of the best.

"Hollow Man" is a fairly entertaining if vastly unoriginal film. It doesn't even bring new ideologies on the theory of invisibility to the table. Kevin Bacon is quite good in the main role and he is still the most likeable person in the film even when he starts killing people. Says a lot about the other characters doesn't it? And sadly the last 20 minutes descend in to cliché ridden slasher movie hell. And for a Verhoeven this movie is tame. He seems to be holding back. Maybe his hands were hell by studio executives. I'm sure there's a director's cut around. Lord knows if we'll ever see it.

Video: This is a great 2000 transfer. Sharp, full of details and fabulous colours. The underground base is a blend of blues and whites, while the infrared colours of red and green and all are vibrant. For a disc so loaded with special features, compression has been handled masterfully with no signs of jaggies or haloing. The visuals in this film, especially the scenes where a monkey and Bacon turn invisible and back again are very impressive. If there is one thing I could critics this transfer for is that there are a few more nicks on the print that you would expect for a recent transfer. But this is a minor and not very visible (unless you're sitting real close) defect.

Audio: Although not as surround active as I thought, this is a fine soundtrack. Surrounds only really come into play at the end, but the front stage fills up the room very well. Bass is strong. Dialogue is always audible. Jerry Goldsmith's score, though not particularly memorable suits the film well.

Extras: Being the first DVD I bought, this introduced me to a wonderful little thing- the audio commentary, which quickly became the favourite feature of mine. "Hollow Man" contains a commentary by Verhoeven, Bacon and screenwriter Andrew Marlow. Thankfully they are recorded together so they play of each other exceptionally well, asking question, cracking jokes and having a very good discussion. This commentary will probably make you appreciate the film more.

Jerry Goldsmith is given an isolated score and commentary. He comments are sparse but are very enlightening.

The bulk of the extras are included in "Fleshing Out The Hollow Man", which contains 15 featurettes one every aspect of the visual effects. They very in length but I calculated the running time of all of them to be around 40 minutes. These are very informative extras though the not so tech minded may be confused by the jargon.

"Anatomy of a Thriller" is fifth teen minutes of PR fluff. The actors give a plot outline and explain their characters and explain why the film is so "great". If only all extras were like this……..

3 Deleted scenes and 2 trailers round off the package.
Overall: This is a very fine single disc DVD. The extras may be a bit light when compared to the standard 2-Disc packages we get nowadays, but how much do you want to know about "Hollow Man"? Hardly the heights of cinema. The sound and transfer are both top notch.
posted by directorscutIMDb on 18/2/2003 22:32