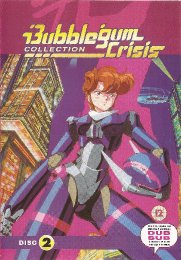 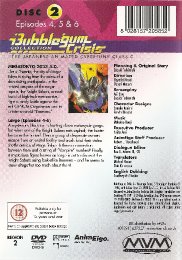 I never thought that I would own this disc. Unlike mainstream cinema, collecting anime on DVD is more a question of opportunism. While sales and bargains are just as common, the lifecycle of anime is a lot shorter. Get the shows while they are out there, for once they are deleted they are gone forever, especially in the UK where licence rescues are rare. Bubblegum Crisis was initially released on DVD before I got into anime, and I only picked up volume 1 as part of a bargain boxset. By the time my interest was piqued, only volume 3 remained available for sale at a reasonable price, while volume 2 was well and truly deleted, and selling for ridiculous money on the second hand market. I gave up on buying it, and instead searched in vain for some convenient online streams. Five years on, I had given up on it completely, and it was only by randomly typing into a search engine this year that I found that the second hand market had cooled somewhat. I could now get Bubblegum Crisis volume 2 for less than 10 pounds. I guess good things do actually come to those who wait. At least I hope it's good. Volume 1 had promise, but its episodes were scuppered by a short runtime, resulting in a lack of character development and thin storylines. That's what made me hesitate on the subsequent volumes for too long. When I finally came to volume 3, I found the episodes were twice the length of those in the first volume, and much better as a result. It will be interesting to see how the episodes in volume 2 fare. 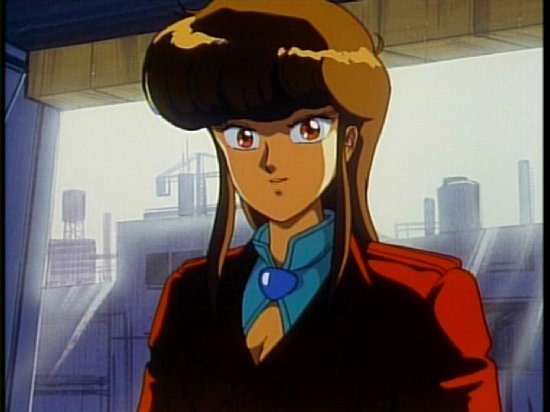 When Ridley Scott produced his influential flop Blade Runner, Japanese animation was quick to embrace 'cyberpunk', and one of the early series produced still remains highly popular, despite only running to eight episodes. Bubblegum Crisis from 1987 is similarly set in a dystopian future city, where machines work side by side with humans. So-called Boomers are indistinguishable from people, although on occasion a Boomer will go rogue, wreaking havoc and creating mayhem, requiring the attention of the heroic Knight Sabers. Four young girls, Priss, Sylia, Nene and Linna have access to form-fitting battle-suits and an array of cutting edge weaponry. They can defeat the toughest of opponents where even the military are outclassed. 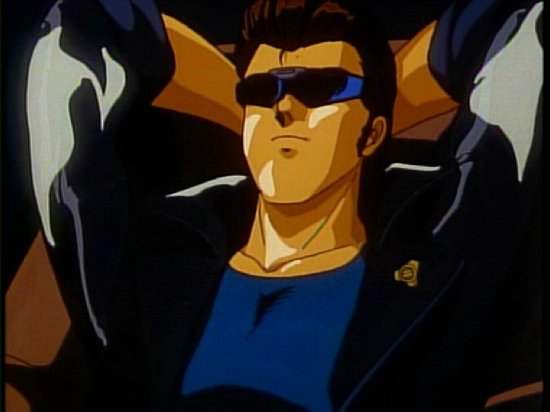 This is an early disc from MVM, evidenced by the NTSC transfer ported directly from the Region 1 version. You'll find three episodes on this disc.

Ep 4. Revenge Road
A muscle car is on the move! It's tooled up, powered up, and built like a tank, and its driver is targeting every biker gang that he comes across, mowing down riders without any remorse. It's been sheer luck so far that no one's been killed. Meanwhile, biker Priss is looking for some more power to her set of wheels, and she pays a visit to 'Doc' Raven for a little tune up, only to find that Mackie has been working on his own two wheeled superbike. It turns out that Doc knows more about the driver of this lethal car than he's letting on. It's revenge that's motivating these rampages, and the sort of tech that's been installed in the vehicle is linking driver and car like never before. This lethal car is about to take on a life of its own, and that spells trouble for the Knight Sabers. 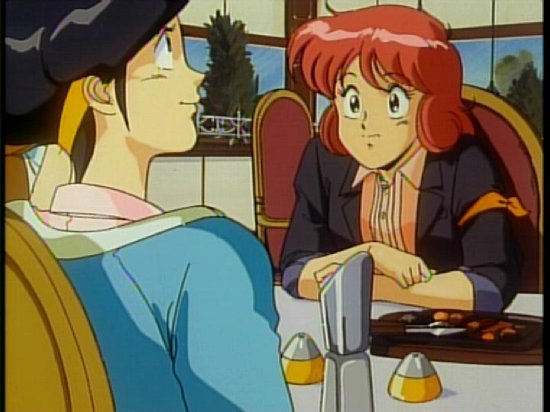 Ep 5. Moonlight Rambler
Violence erupts aboard a space station, as five fugitives head toward the space dock, only to be hunted down by cybernetic machines. Of the five, only two manage to escape, and for the SDPC that runs the space development industry, it's a matter of no little concern. It's also a matter that they want to keep quiet at all costs. Sometime later, Priss has a new friend named Sylvie with a similar freewheeling outlook on life. There's a ruthless executive at the SDPC named Largo who is using whatever means necessary to track down the fugitives, and a certain piece of technology they have stolen. And all of a sudden, there appears to be a vampire loose in the city. If the Knight Sabers manage to piece all this together, it will only mean tragedy for Priss. 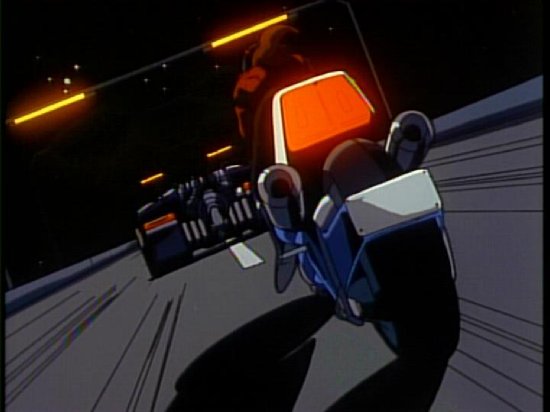 Ep 6. Red Eyes
Following on from the events of the previous episode, Priss has become disillusioned with the Knight Sabers, and uncertain of her actions. It drives her to quit the team. This couldn't happen at a worse time, as suddenly there are a group of lookalikes abroad in the city, although these Knight Sabers go around committing murder, theft, and acts of destruction. The Knight Sabers are suddenly public enemy number one, and the police are on their trail. This is just what Largo needs as he sets his plans into motion. He's recruited Sylvie's fellow fugitive Anri to his cause, and is using her desire for revenge against her. 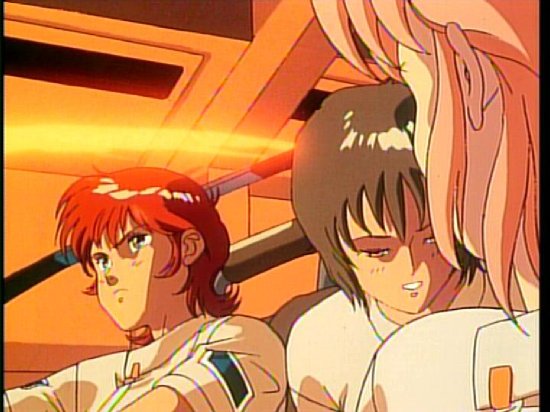 Bubblegum Crisis gets a 4:3 transfer, NTSC as I mentioned earlier. It's an old style hand drawn animation, with the low resolution and soft image indicative of a videotape source. The image is a little faded and there is the odd spot of print damage, understandable in a show pushing its second decade. Having said that, the animation is very good given its age. The character designs, while stylised are effectively realised, and the world of Bubblegum Crisis is a detailed and richly layered one. 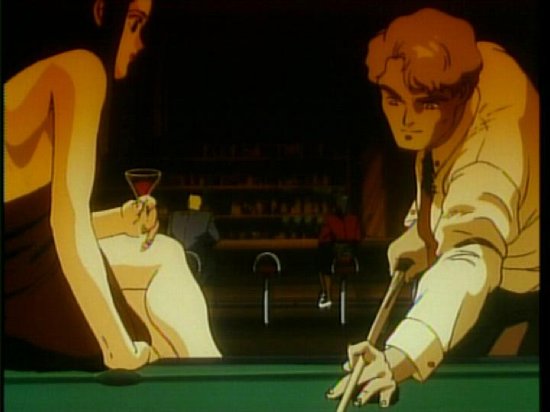 You get a choice of DD 2.0 English and Japanese, with English and French subtitles. The dialogue is clear and the sound is functional. This is one of those shows in which music plays a great part. Priss is lead singer in her own band, The Replicants (now there's a Blade Runner reference for you), and as such there are at least a couple of new tracks every episode. In an interesting move, the songs have been translated and re-recorded in English for the dub version, keeping the original tunes. It was successful enough for there to be two soundtrack albums for the series. It's all very eighties though.

You get the animated menus as usual, and the disc credits are comprehensive once more, offering the Japanese and English cast credits for both episodes, as well as details of the songs therein.

There is no mention of DVD-ROM material on the case, but looking at the disc contents, there is a gallery file, which I guess contains some more images to peruse. There isn't any software on this disc, so you'll probably need the software installed from Disc 1 to view it. 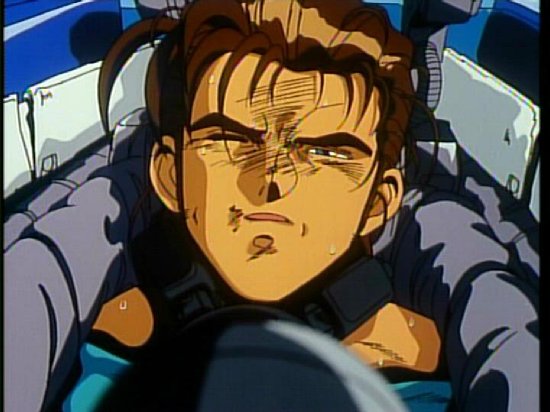 Now I understand why volume 2 was so hard to get a hold of. It's the best Bubblegum Crisis of the lot. Volume 1 had an astounding opening episode, replete with the cyberpunk coolness and eighties style that made it a sheer joy to watch, but the subsequent two episodes failed to sustain that momentum, hampered by shorter runtimes and consequently hurried writing. Volume 3 on the other hand didn't have that problem, offering two episodes of decent length, with great stories, full of action, and with the space to develop the characters. But it's the two-episode story here in volume 2 comprising Moonlight Rambler and Red Eyes that brings forth the best of what Bubblegum Crisis has to offer, in effect presenting a feature length movie. It also doesn't hurt that the runtimes to these episodes are also of significant length, allowing for the more rounded writing and character development that the Bubblegum Crisis universe deserves. 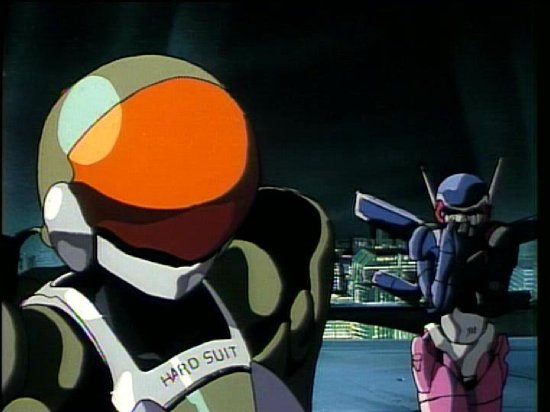 The opening episode however, Revenge Road is pure eighties cyberpunk, not so big on the character development, and instead playing hard and fast with the concept, the joining of man and machine. Here it's a vengeful driver and his customised car seeking to mow down the biker gangs that left his girlfriend in a catatonic state, when his car was attacked on the motorway. It's Knight Rider gone horribly wrong (incidentally there's a rather familiar piece of music in this episode). The plot here loosely hangs together, with Priss coincidentally getting her bike serviced from the same mechanic who knows the resentful driver. It's not the strongest episode of Bubblegum Crisis, but it does manage to entertain. 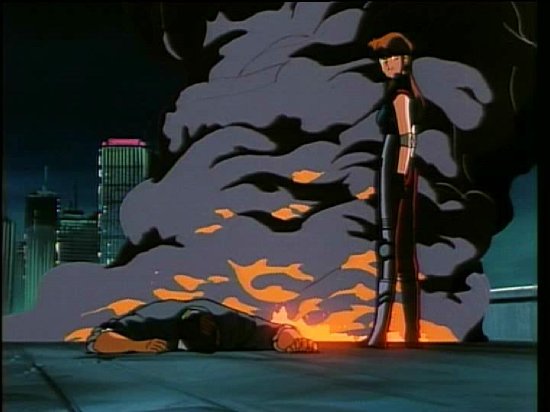 It's Moonlight Rambler and Red Eyes that make this disc the essential purchase, as it's here that we not only get the excellent writing that the series deserves, but we also get some serious character development too. Best of all, this story references the plot of Blade Runner. In the 'original' Blade Runner, five skinjobs stole a shuttle and made it to Earth. In the pre-credit sequence to Moonlight Rambler, we see what that may have looked like, as five, very human looking girls attempt to steal a shuttle and escape a space station. In this case only two make it to Earth and wind up complicating the lives of the Knight Sabers and Priss in particular. 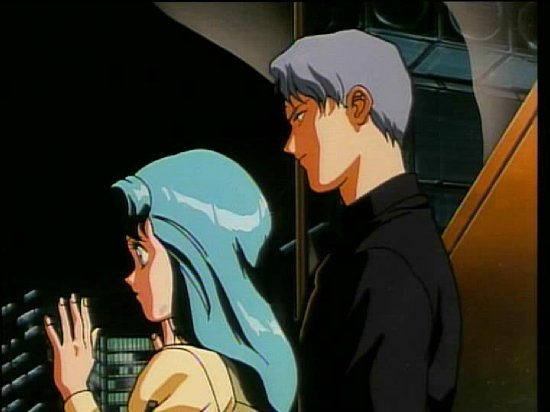 Just like in Blade Runner, these fugitives are more human than human, although instead of seeking more life, they only want freedom. When Sylvie encounters Priss and discovers her freewheeling spirit, she can't help but be enamoured. The trouble is that in stealing the shuttle, they stole more than just a spaceship, they stole a top secret weapon as well. Also, for Anri to be truly free, Sylvie needs to steal a certain bit of software from the very corporation that is hunting them and the stolen weapon. Working for that corporation is an executive named Largo, who is far from who he appears to be, and who knows more about Sylia and the Knight Sabers than is comfortable. The arrival of Sylvie and Anri on Earth gives him the opportunity to put his plans in motion, and he pits all sides against each other, manipulating them with uncanny skill. The tragic conclusion of Moonlight Rambler carries over into Red Eyes, with Priss left wanting to quit the Knight Sabers, and Anri looking for revenge, and easier than ever to manipulate. It turns into the most difficult mission for the Knight Sabers to date, with the fate of the world hanging in the balance. It's classic anime, and easily the best of the short OVA series. If anyone would think of adapting Bubblegum Crisis to live action cinema, this would be the ideal tale to translate to the big screen. 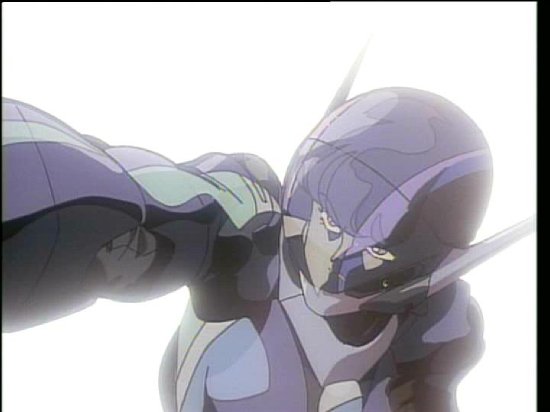 There are some classics of anime which should never be allowed to vanish from shop shelves, and Bubblegum Crisis is one of them. I've been after this second volume so fervently, that it is actually my first ever second-hand DVD purchase. I can tell you that it's well worth the effort, as this is easily the best of the short series. I think it's high time that someone thought to release this show again. In Japan, it's so well thought of that it has a Blu-ray release now, something that is perfect for the traditional cel animation, and something that will make that eighties pop soundtrack just zing in lossless form. If it could ever see an English language release with dub and subtitles, I could see myself reaching deeply into my wallet for it.