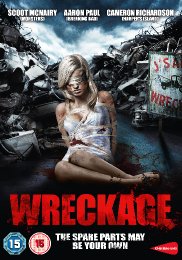 Wreckage is a film crying out for car-related puns. It belongs in the category of low-budget, derivative horror films that almost warrant sneering, abusive verbal diarrhoea. But I'll resist, because at the very least, this is an honest attempt at a straightforward genre flick, and deserves a fair trial.

The synopsis however reads like any one of enormous number of generic horror films featuring teens behaving ridiculously stupidly that stubbornly flood the market year after year.

The story kicks off with a rather grim prologue that sees a hillbilly couple and their neglected children involved in a situation with a shotgun that leads to tragedy. Clearly, this is an incident that will shape much of what we subsequently see.

Jumping forward, two couples head out on the open road for a spot of innocent drag racing, when their ride breaks down in shameful fashion. Jared (Mike Erwin), Rick (Aaron Paul), Kate (Cameron Richardson) and Jessica (Kelly Kruger). By this point, the film has already frustrated, because of course, one of the ensemble is a complete moron, and the logic of why others would spend time with him is completely eschewed. Nevertheless, the four trundle to a nearby scrap-yard to steal a few bits to fix the car, because heading back in to town would be too straightforward for these chumps. By this point, it is nightfall, and said scrap-yard looks very unwelcoming.

Meanwhile, a serial killer has unfortunately made short work of the security in a local correctional facility. In true Michael Myers style, he's on the loose, but the local sheriff just isn't that fussed. For our foursome of incompetents though, neither their buggered vehicle or friendly psycho are the biggest concern. Instead, Rick is the cause of panic when he decides to fiddle with a handgun, resulting in Kate being well, shot. Jared decides to head to the Sheriff's office to get medical attention for his missus. Mind you, Kate's boyfriend Jared is remarkable calm through this, reacting with little emotion here, or indeed, through the entire film. It's actually a big problem with all the characters: they behave in a stock manner. "you're the crazy one…be crazy!" or "Ah, the sensible one!". It comes across as flat, and unbelievable, thus making it extremely difficult to actually invest in the predicament of anyone involved.

These issues intensify as the cops arrive with Jared at the scene. They're a bumbling assortment of imbeciles, and easy prey for the mystery killer out there picking them off one-by-one. Obviously, all is not as it seems, and things aren't as simple as the serial killer simply randomly hacking people up. Unfortunately, the opening, and the lame red herrings sign post the well-intended twists and turns.

As the film spirals towards the finish, it unfortunately unravels, and the nature of what has occurred is revealed.

While Asher has put together an imminently watchable film in a fairly professional manner, he's let down badly by a truly dire script. It is insultingly obvious to predict events as they happen, and more to the point, they're uniformly unexciting and unoriginal. In the odd event of something coming along that switches gears, it infuriates rather than tantalises. Performances such as that of Scoot McNairy (Monsters), don't help. He's truly terrible here, offering an inappropriate pastiche of a redneck that bears a striking resemblance to Stephen King's comical turn in George Romero's Creepshow. The remaining cast members are a little better, although for me, the hero played by Mike Erwin is somewhat stoic and two-dimensional.

On the plus side however, we are treated to a few nice shots during some of the kill sequences, and the odd spark of invention. One death in particular is executed in a very effective, surprising manner. Additionally, while the sub-standard plot is overwhelming, a few bright ideas do suggest better things to come from the people involved.

Efficient is possibly the best term I could use to describe this effort. There's not a great deal wrong with it at first glance, but upon closer inspection, it is completely devoid of anything approaching satisfactory. An attempt to shoot for an old-school teenagers-in-peril slasher, coupled with a post-modern twist or two, should be commended, however, good intentions only go so far.