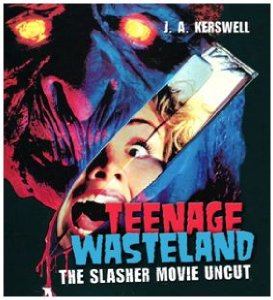 Teenage Wasteland: The Slasher Movie Uncut lifts the lid on the glory days of the slasher, perhaps the most reviled but also the most commercially successful of all horror's subgenres. Taking its cue from a diverse range of sources, including the Parisian theatre of the Grand Guignol, German krimis, Alfred Hitchcock, grindhouse movies and the gory Italian giallo thrillers of the 1970s, slashers brought a new cinematic high in violence and suspense to mainstream film.

Following the development of the slasher, from its beginnings, through the 'Golden Age' (1978-84) to its recent resurgence as a popular film form, Teenage Wasteland also touches on the political, cultural and social influences of the subgenre and, in turn, its own impact on cinema and popular culture.

Featuring key reviews of the best (and worst) slashers, a body count and a list of first appearances by Hollywood A-listers, Teenage Wasteland is a beautifully illustrated and lovingly put together history of the subgenre. It is unlike any other book published on this subject.

A must for anyone interested in film and 20th- and 21st-century popular culture.