Blu-ray
The Man Who Haunted Himself

DVD
Voyage To The Bottom Of The Sea: Series 4

DVD
Voyage To The Bottom Of The Sea: The Complete Series 2

DVD
Man at the Top - The Complete Second Series

DVD
Voyage To The Bottom Of The Sea: The Complete Series 1 (9 Discs)
Related Articles

The Virginian: The Complete Series 1 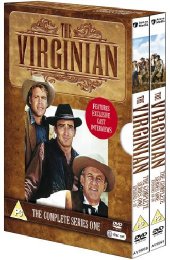 Synopsis:
The rustle of sagebrush and hot desert sands; pounding cattle hooves and rifle-shot echo. In a time when the West was still wild, a man came to Medicine Bow, Wyoming and they called him The Virginian. Tackling rustlers, land-grabbers, escaped convicts, con men, corrupt railroaders and even a spinster-lady bank clerk with a cool head for crime, The Virginian was fair-minded, fast-drawing and not afraid to stand up for his friends in a place where slight disagreement could lead to sudden death.

Filmed entirely in colour, The Virginian was based on one of the first great novels of the American West, Owen Wister's 1902 book of the same name. Stars included Lee J. Cobb as Judge Garth, owner of the Shiloh Ranch, and James Drury in the title role as his foreman, with ranch hands Trampas, played by Doug McClure, and Steve Hill played by Gary Clarke. The cast was completed by Roberta Shore in the role of Betsy, the judge's daughter.

The Virginian stands as a provocative and exciting monument to the great American western; not afraid to take on serious and hard-hitting issues - and not afraid to throw a few punches for the fun of it too.