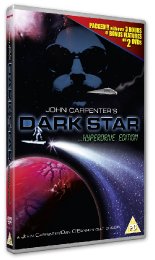 
Film
John Carpenter's output throughout his thirty-seven year directorial career has been enigmatic, often brilliant, wildly inconsistent, but always…always fascinating. At his best he has delivered genuinely iconic moments in the horror genre (The Fog, Halloween, The Thing), but has also added his own quirk to one the most difficult tasks in the genre… adapting Stephen King (with Christine). Carpenter, has also dabbled in the Science Fiction arena successfully (Starman, Escape From New York). The 63 year-old has also had his missteps however. For every They Live (the finest film ever made starring a professional wrestler; in this case, Roddy Piper), there has been an Escape from LA. Additionally, his post-Eighties output was met with critical derision, and audience apathy, with the majority of his work tanking at the box office. Dark Star is where it all started for the man who has recently released his Twentieth feature (The Ward). 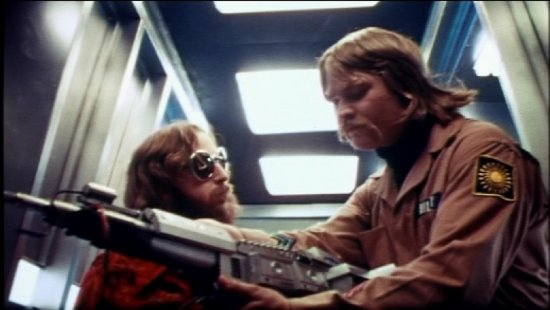 Dark Star was originally intended to be a student film, a collaboration between the late Dan O'Bannon, and Carpenter. Running at under seventy minutes however, a producer convinced them to shoot additional scenes, in order to facilitate a feature-length running time. The end result, Dark Star, was released theatrically.

Carpenter's debut carries with it a tremendous reputation and I'm happy to say, I believe it to be warranted. In the (no longer that distant) future, astronauts travel through space on a pre-colonization mission, and destroy stars along the way, before things begin to go wrong. It all sounds rather routine…

Dark Star however, is anything but, instead it's a frankly bizarre mixture of comedy and experimentation in which suspense manifests seemingly out of nowhere. The joy of the situation is, they're a bunch of hippies bored out of their minds, and throughout the course of the film, all manner of problems arise as nothing seems to go right. These are unbalanced men, depressed and beyond repairing their disintegrating ship. One character barely interacts with his colleagues remaining in isolation, while the others bicker and grow increasingly resentful. A wacky scene in which a character is trapped in an elevator shaft is both hilarious and gripping, despite being utterly absurd. Later, a crew member has a chat with one of the ship's bombs prior to it being deployed. 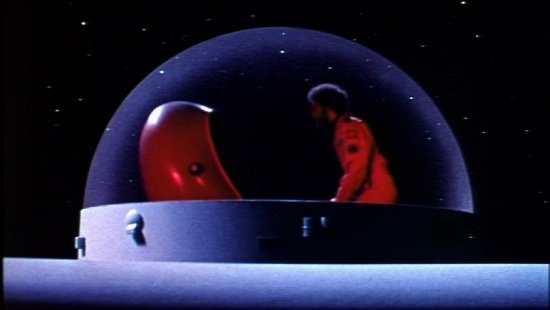 The film is also known for it's unique casting, as the ship's computer has a sultry female voice. In audio terms, more notable still is the eclectic soundtrack, mixing a little contemporary pop with standard bleeps and whistles. Carpenter however, uses his cues wisely, throwing in his trademark menace on occasion, to very good effect indeed.

The Special effects in Dark Star are clearly rather primitive, but in are also inventive and extremely jolly. It's all tinted filters and lenses, with an overpowering focus on red. Obviously this sort of effect was easy to achieve on a next-to-nothing budget and gifts the movie with a consistent visual tone.
Carpenter and his buddies should also be applauded for the creation of one of the more ludicrous aliens in cinema history, a creature that appears akin to a giant, inflated Ladybird balloon, with Dragon-like feet. Obviously, this is the sort of thing that really has to be taken in the right spirit, and those expecting ET levels of believability will be sorely disappointed. The scene is definitely a deal-breaker for many people and it alone will determine your tolerance for either watching the movie, or giving up altogether.

Where Dark Star really stands out though, is in the clear evidence that both Carpenter, and Dan O'Bannon were forces to be reckoned with. Everything about this film screams "will go on to bigger, and better things". Obviously, this is he case for both men, but re-visiting this, with hindsight, you can see talent and wit ooze out of each and every frame, regardless of how unsophisticated a film Dark Star is.


Audio and Visual
This is as good as you will ever see this low-budget effort on DVD. In several instances, the age and inferior genesis of the material does show somewhat, but it hardly matters. Nobody should be approaching Dark Star expecting to see an image the quality of Independence Day, or the countless Science Fiction entries that have dazzled our eyes over the past couple of decades. With that said, the image is surprisingly crisp and clear in many scenes, and a massive improvement over some of the horrendous transfers seen over the years

The soundtrack is in better condition that expected, though still, hardly an audio delight. Dialogue is frequently slightly muffled, but it's clearly an issue with the source material rather than this version. Carpenter's traditional use of grim, foreboding music sounds clear and crisp, and stands up well. 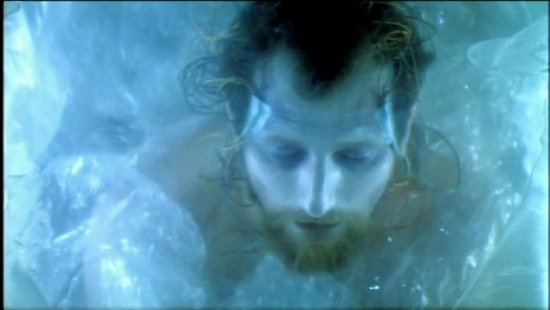 Extras
From the outset, it's clear that Fabulous Films should be applauded for releasing a version of this movie with such love and care put into it. The menu screens are a wonderfully retro, and very much in tune with the film. We also get the film in two versions, the original director's cut, and the theatrical cut. This release is absolutely loaded with goodies, something we've largely come to expect with John Carpenter re-releases.

-Original Director's Cut
-Theatrical Cut
-Let There Be Light: The Odyssey of Dark Star Documentary
-Dan O'Bannon's final interview
-Interview with Alan Dean Foster
-Interview with Brian Narelle
-3D guide to the Dark Star Ship
-Audio Commentary by super fan Andrew Gilchrist
There's also a humorous written interview by Dan O'Bannon that really sets the mood for the film, and the obligatory trailers and trivia sections.
The Documentary, "Let There be Light", is tremendous. Shot in the style of a series of entries in the Ship's log from the crew, it takes us back to the formation of the crew, and genesis of the movie at the University of California. It would have benefited from Interviews with Carpenter, but in lieu of that, we do get audio snippets, cleverly worked in. Dan O'Bannon's final interview as advertised, isn't actually a separate extra, instead, a very effective part of the documentary. At nearly two hours long, you could not ask for more from this, a piece worth the price of admission alone, and a must for all prospective filmmakers.
The interviews with Brian Narelle and Alan Dean Foster are worthwhile, particularly Narelle's, as he's an enthusiastic, articulate fellow. The 3D guide of the ship feels less necessary, but I'm sure fans will find it enjoyable. Likewise with the dry, but knowledgeable commentary track.
In all, this an excellent, good value package. 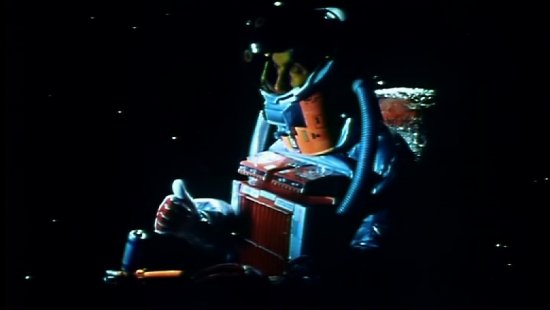 Conclusion
Dark Star, it must be said, is something of an acquired taste. It is far from a polished product, and plot-wise, pretty wafer-thin. However, given the circumstances in which it was made, and the pitifully amount that it cost, the finished result is something of a miracle. It is certainly a remarkable achievement. I would suggest the entertainment value of the piece in 2011 very much depends on the individual, and how much a fan of the writer and director they happen to be. But for those curious about the beginnings of John Carpenter's career, or low-budget filmmaking in the Seventies, Dark Star is something of a must-see. In my opinion, the accompanying making-of documentary is actually superior to the picture itself. With this release, and the entertaining extras on offer, Fabulous Films have only cemented that. The film is simply a diverting curiosity, but the package is actually fabulous.

This is something like the fourth or fifth re-release on DVD for Dark Star, from plain vanilla issues to 30th Anniversary collectors' editions.   This release by Fabulous Films is a two-disc port-across of the identically titled VCI Entertainment edition that came out in the US last October.  As releases of Dark Star go, this is definitely the one to go for as the other editions (which are still available) are fairly awful.

Dark Star was shot on 16mm as a student film at the University of Southern California.  When Carpenter dropped out, he took the 45-minute film with him.  A series of successful film festival showings in 1973 brought the movie to the attention of producer Jack H Harris, who picked up the theatrical rights and in addition to blowing the footage thus shot to 35mm stumped up the cash to expand the movie to its 83 minute theatrical length.  This chequered history means that Dark Star will always look rather rough no matter how much work goes into the transfer.

For all its rough edges, it's an engaging science fiction comedy and cannot be underestimated for its influence (the Beachball-With-Claws was to be reinvented by writer Dan O'Bannon as the Alien).

Over the past ten years, at least four of us DVDReviewers have had a crack at reviewing previous editions, with each of us having a different experience of the movie, and I suspect Michael won't be the last.
posted by Mark Oates on 9/3/2011 02:47