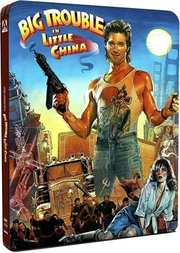 Russell plays Jack Burton, a reasonable guy who is about to experience some unreasonable things in San Francisco’s Chinatown. As his friend’s fiancée is kidnapped Jack becomes embroiled in a centuries-old battle between good and evil. At the root of it all is Lo Pan, a 2000-year-old magician who rules an empire of evil spirits. Jack goes to the rescue dodging demons, goblins and the unstoppable Three Storms as he battles through Lo Pan’s dark domain.

One of Carpenters most enjoyable and best loved films, Big Trouble in Little China brilliantly juggles delirious set-pieces, comedy and kung-fu action with a razor sharp script of corking one-liners, as Jack would say “It’s all in the reflexes”.

The super-deluxe package, which is available both as a standard Blu-ray and as a limited edition Blu-ray SteelBook, is full of special features and bonus material.