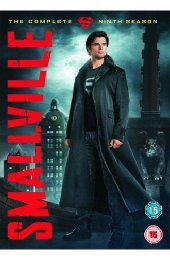 Synopsis:
Soaring into its ninth season, this modern retelling of the Superman legend and its classic characters continues to blend realism, action and emotional depth to reveal a new interpretation of the enduring mythology. This season, as Metropolis's clock tower tolls our characters' darkest hour, we find Clark Kent (series star Tom Welling) finally making his first attempts to embrace his calling as a superhero.

In the season premiere, Clark tells Jor-El he's ready to start his training, but Jor-El sends him back to Metropolis to cut ties with Lois before he can begin. Chloe (series star Allison Mack) is shocked when Lois (series star Erica Durance) suddenly reappears after having been missing for weeks -- but Lois has no recollection of vanishing into thin air with the Legion ring. While investigating a monorail crash, Lois meets John Corben (guest star Brian Austin Green - Terminator: The Sarah Connor Chronicles), a new reporter at The Daily Planet, with a negative attitude toward the "Red-Blue Blur." Chloe begs Clark to use the Legion ring to go back in time to save Jimmy, but he refuses, driving a wedge into their friendship. Meanwhile, Oliver (series star Justin Hartley) continues down a dark road, and Zod (new series star Callum Blue) arrives at the Luthor mansion.