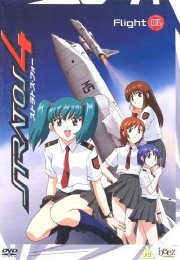 I didn't think that I would be writing that again, not so soon after reviewing the Najica Blitz Tactics series (one of the most clicked upon anime reviews on this site, although I don't fool myself that it's for my colourful prose. It's the screenshots). For some strange reason, female underwear, especially when it's worn, and even when both underwear and female are drawn, is a major enticement to adolescent males. I'm hard pressed to explain it, but shows like Najica prove quite popular, and the studio that made it, Studio Fantasia, know a good thing when they have one. The Agent Aika, and Aika-16 OVA series also delivered gusset in excess, and I now take a look at Studio Fantasia's Stratos 4 series, released in the UK by Beez Entertainment. You may be wondering just what kind of lecherous pervert I am, wilfully going out and buying another such series, but Stratos 4 is a perversion with a difference, it's panties with sci-fi! I'm sold.

It's the future and the Earth is in danger as never before. The skies are full of comets, asteroids, and debris, all on a collision course with Earth, but to combat this threat, a space force has been put into place, the Comet Blasters, who venture forth from an orbiting space station and disintegrate the rocks before they fall to Earth. Of course there can be no plan without a back up, and supporting them from the Earth's surface are the Meteor Sweepers, who launch in high altitude aircraft to clean up what the Comet Blasters miss. As you would expect, it's the Comet Blasters who take all the glory. Mikaze Honjyo comes from a family of pilots, and together with friends Karin, Ayamo and Shizuha they undertake training as part of the Meteor Sweepers, hoping to work their way up to a space-borne position. Except that Mikaze lacks motivation and ambition. 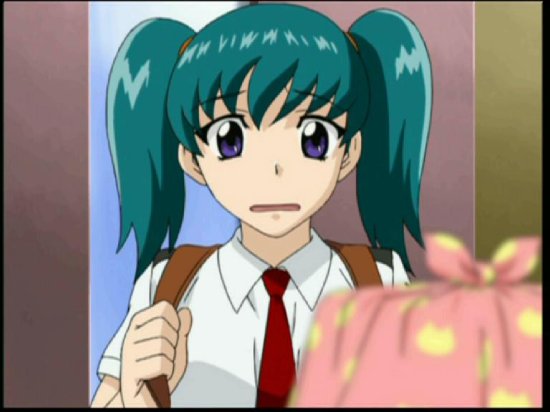 The first four episodes are on this disc from Beez

1. Initial Point
A space station detects a comet headed for Earth, and a group of crack pilots called the Comet Blasters are scrambled to deal with the threat. Back on Earth, the world watches with bated breath. Actually not so much. It's a regular occurrence, and while the news plays in the background, the population goes on with their everyday lives. For Mikaze Honjyo, that means going to the academy, where she is being trained as an elite pilot, one day destined to be a Comet Blaster. Except her heart isn't in it. She's not motivated at all, waking up late, drifting off in class, and taking any opportunity to grab forty winks. Her friends are exasperated, and keep trying to pep her up. You can see why too, as Shimoji Base is home to the Meteor Sweepers, essential back up to the Comet Blasters. But when Comet Catherine approaches, and Shimoji Base is put on alert, Mikaze and her friends are sent home, and spend the night delivering food for Kouchin, the Chinese restaurant where the girls live.

2. Fox One
Mikaze is still spacing out through her lectures, and collecting the pink punishment cards that ensure that she's always running laps of the runway. It's her memories of her past, and her family that make her so hesitant to succeed as a Meteor Sweeper, but when another comet is detected heading to Earth, and it proves too much for the Comet Blasters to handle, circumstances are such that Mikaze is forced to make a decision. Does she stay stuck where she is, or will she step forward and move on with her life? 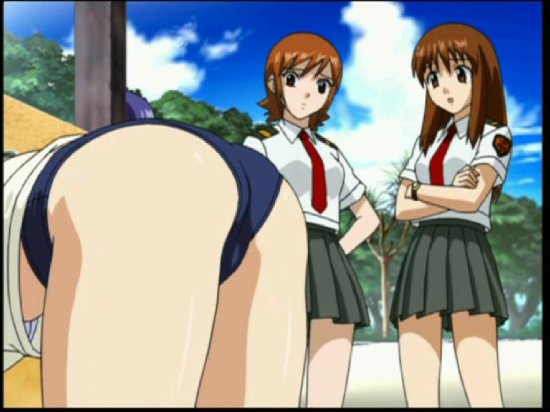 3. Decision Height
It's as if a switch has been flipped in Mikaze; she's bright, eager, and no longer needs to be kicked out of bed in the morning. Her friends' concern now switches to her apparent overwork, and they decide to take an afternoon off swimming. But at the party thrown in their honour at Kouchin, they still have to serve the guests. A chance comment from one of the pilots sticks with Mikaze, and during the next training mission, she decides to try for the high altitude record. It proves to be a potentially fatal mistake.

4. Tally Ho
Following their previous success against Comet Catherine, Mikaze and the girls have been moved up the pecking order, with first crack at the next incoming piece of rock. They're getting cocky, and justifiably so, but it doesn't sit well with the pilots that they displaced. It's a knock to Mikaze's confidence when one of them challenges her to a marksmanship contest, which makes her all the more eager to make up for it. But her judgement fails her when the next fragment of meteor arrives, and she disobeys orders. But no one was expecting it to change course! And when the girls land, Karin is taken strangely ill. 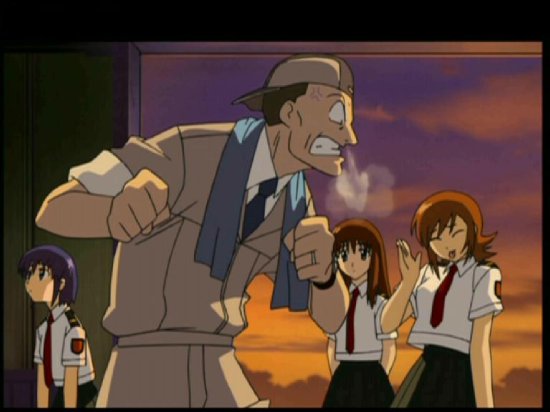 The 4:3 regular transfer is clear, sharp and colourful. It's one of the better such conversions in terms of NTSC-PAL, in that there's no ghosting or judder, and in terms of clarity, it could almost be native PAL. It's just a tad soft though, which I guess is to be expected. However, that has to be balanced with excessive pixellation and artifacting around fast motion. It isn't unknown in animated DVDs, but this is a little too much, and just too noticeable in some scenes. You expect to see it if you pause the disc at an inopportune moment, but you usually miss it during normal playback. Not here though, and it can be distracting.

The show itself comes from around 2003, and is a little behind the curve in terms of its look and style. The character designs are simple, but memorable enough, but this is one of those anime that mixes 2D and 3D CG elements. It's just that there's no attempt to blend the two, and the CG does stick out a mile, especially the space stations and air/spacecraft. That said the animation is bright, pleasant and fluid, and the show is very aesthetically pleasing. Surprisingly, while the panties and odd camera angles are there, they don't overwhelm the show. You can go for five or six minutes without a gusset flashing by onscreen, but that is made up for by the form fitting pressure suits that the girls wear on their missions, which may as well just be sprayed on. 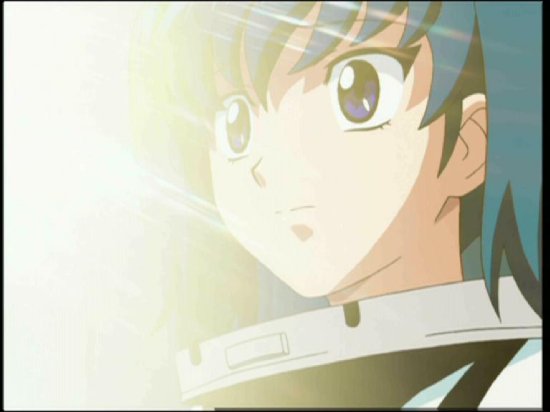 It's the basics for the sound on this disc, DD 2.0 English and Japanese, along with optional translated subtitles in English, French, and Dutch (Beez is an anime company with a European presence). The dialogue is clear for both versions, and you get some nice, poppy themes for the opening and end credits. The sound is adequate for the action nature of the show, but a surround track would have been nicer. As for the dub, it's passable, although I have to admit that I didn't personally find it all that pleasant, sounding awkward and unnatural at times. Japanese is the way to go here.

The Amaray case gets a reversible sleeve, which allows the girls to change out of their uniforms into something a little more comfortable. The disc gets a nice animated menu, with all options available from all menu screens, making navigation a doddle.

The substantial offering here is the Making Of, which lasts 22 minutes, and lets us sit in on a staff meeting, and follow them location scouting to Shimoji Island. It also reveals their new panty policy for the show, 'less is more'. That's not less material in the panties, that's fewer panty shots altogether. While we do get to see the aviation otaku at work, much of the debate does revolve around just how much posterior to show, and they come to a happy compromise which ensures this volume's PG rating. It's one of those spoof comedy documentaries… 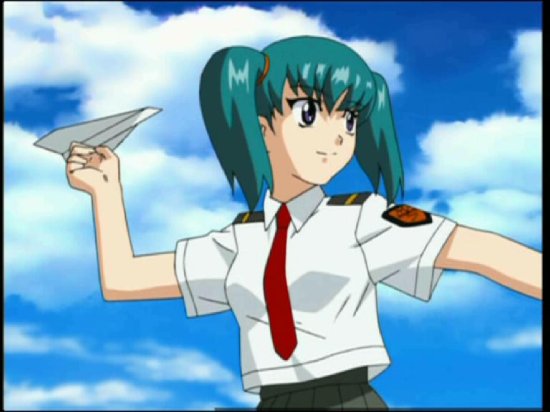 No panties!? What's the point of that then? You have 'From the creators of Najica and Aika' emblazoned on the DVD cover, and you deliver something that is positively restrained for Studio Fantasia. There's barely one lingering shot on gusset every five minutes, if that, and you end up having to concentrate on the story instead. It's a good thing then that the story is pretty interesting, the characters entertaining, and the animation nicely accomplished. And the animators do take every opportunity to throw in a little fan service when it doesn't distract too much, and there are the odd blatant moments of Dobby the House Elf handling the camera duties. Form fitting pressure suits I can understand, piloting a plane in a seated position akin to a motorbike rider, so that your rump is in the air, I can't understand. But the camera takes full advantage of that regardless. 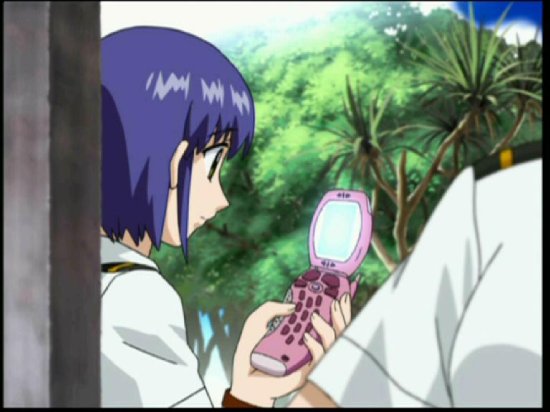 It's a sci-fi staple nowadays, the great big rock threatening planet Earth, and a band of trusty heroes tasked with saving us all. Stratos 4 ups the stakes somewhat, by having the whole solar system passing through an area of space teeming with debris, and all planets and heavenly bodies being peppered with impacts. It does have the usual cliché of our heroes destroying the rocks at the last minute, disintegrating them over the Earth, where realistically, it would be far more efficient, and less energy expensive, to detect them early, and set out to divert them a couple of decades before they even get close to Earth. Of course that's not exciting. It starts off with your Armageddon scenario, stretched into a big deadly rock of the week series, but as we get to the end of the disc, it becomes clear that there is more than meets the eye to this prolonged natural catastrophe. 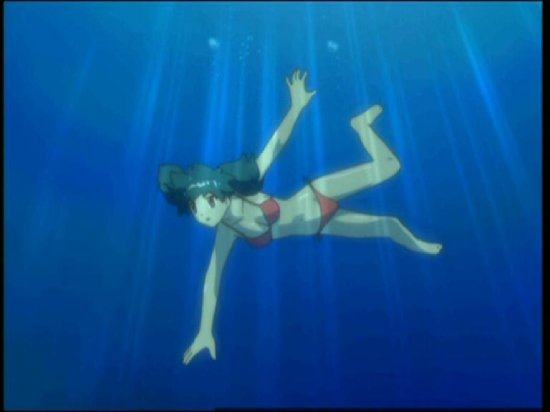 The characters are all agreeable enough, if skating too close to cliché at times. Mikaze is the initially unmotivated girl, obviously having issues with her pilot heritage, as well as with her past, but once she gets an opportunity, she's the sort to grab it with both hands. Karin is the understated Spock of the group, precise, soft spoken, and analytical, while Shizuha is more of a nurturing mother type. It's Ayamo who is the brash go-getter of the group, the one who is initially most exasperated by Mikaze's apathy. Incidentally, this is yet another series where the world can only be saved by teenaged girls. What did you expect? It's anime… 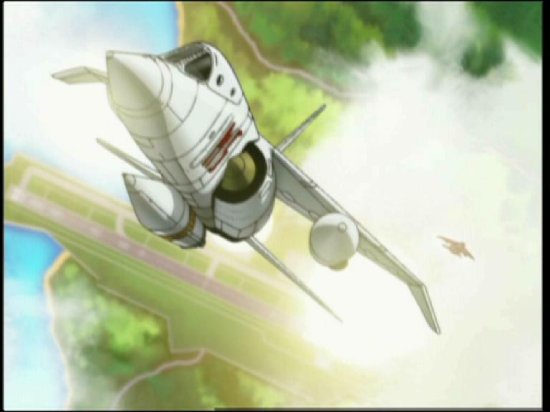 It's interesting how some shows already feel dated, while others are essentially timeless. Stratos 4 is one of the former. The animation looks very much of its time, getting the story across adequately enough, but it doesn't seem to have received the extra care and attention that other shows get. The character designs are pretty generic, and so is the script, with teenage girls obsessed with trivialities while occasionally saving the world. Of course, the first four episodes are really just used to set the scene and develop the characters. The disc ends at a promising juncture, with the reveal that these comets aren't exactly your normal every day ball of ice and rock. How the second disc develops this will impact on my appreciation of the show. With just this first disc though, I'm mildly entertained. Stratos 4: Volume 1 is a relaxing way to pass the time, with some easy-going comedy sci-fi action. And while panties and female flesh may be rare visitors to this clean and slightly more family friendly offering from Studio Fantasia, there is still enough fan service to make you appreciate the more puerile things in life.