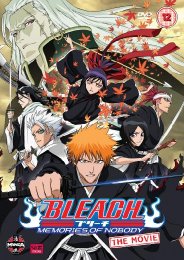 Bleach The Movie: Memories Of Nobody (DVD Details)

Bleach The Movie: Memories Of Nobody

Now that I think about it, tie-in anime movies have something of an unfair reputation. You have an ongoing series, a show that is so popular that fans clamour for a big screen adaptation, but when it comes, it's hamstrung by the fact that it probably won't be adapted from the original manga, as the television series is, and also that it cannot add to, take from or significantly alter that ongoing continuity. A movie has to be completely fresh material that leaves the franchise in the same state that it found it. Thus the anime tie-in movie has a reputation of a pointless big-screen diversion, all flash and no bang. Yet thinking back on all the anime movies that I have seen adapted from television shows, it's the rare movie that hasn't failed to entertain, and some, like the Ah My Goddess and Tenchi movies have even transcended the source material. Shonen shows are most popular among the teen male demographic, and as such beget plenty of movie adaptations. They are also more apt to feature episodes spanning battles, and oodles of filler when the original source material runs out. For a show like Naruto, said filler gets to be risible after a point, and there is an argument that movie adaptations are really just glorified filler with decent animation. There is something to that with Naruto, although the movies did provide decent if pedestrian entertainment for their runtimes. Bleach is very much cut from the Naruto mould, a shonen action show, which will have its own problem with filler in due course (We're a little behind in the UK). So while I am expecting to be entertained by the first Bleach feature film, I'm not expecting much more than that. 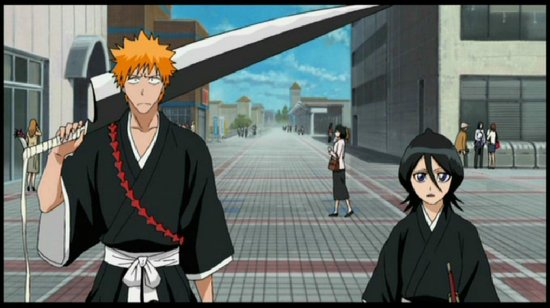 You'd think that a teenager's life would be complicated enough if he could speak to ghosts. But that was only the beginning for Ichigo Kurasaki. When he literally bumped into a Shinigami named Rukia Kuchiki, he was introduced to a whole new world. The Shinigami's mission is to guide forlorn spirits known as Wholes to the Soul Society, and protect them and the living from Hollows, perverted spirits that have become monsters that prey on other souls, living or dead. They are not supposed to let the living know about this supernatural world, but not only did Ichigo see Rukia, circumstances forced her to give him her powers, and train him to be a Shinigami while she regained her strength. 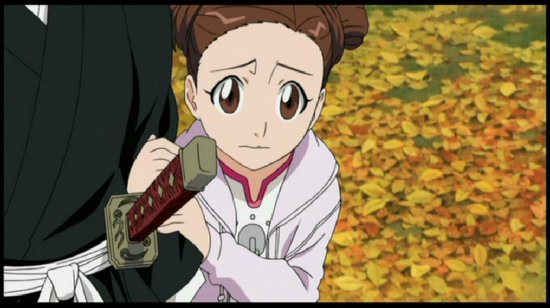 Following the Soul Society arc of the series, Ichigo and Rukia are back in the living world, and back to work as Shinigami, protecting everyone from the scourge of Hollows and making sure that lost souls get directed to the Soul Society, so that the circle of life, death and rebirth can continue. Except that suddenly it seems that the circle is broken, and there is a new player in town. Ichigo and Rukia investigate a source of intense spiritual pressure, and find an infestation of blanks, soulless spirit forms. Before they can be overwhelmed, a new Shinigami arrives, and effortlessly deals with them. She is Senna, although oddly she has no memories of the past, of the Soul Society or any of the other Shinigami, she just fights on instinct. While Rukia goes back to the Soul Society, she tells Ichigo to stick with Senna, to find out more about her. While Ichigo is on a wild goose chase, trying to keep up with the playful Senna, Rukia finds out what is going on, and it's bad. A banished clan of Shinigami are back from their exile to the Dangai Precipice World and they want revenge. They plan to destroy the Soul Society that betrayed them, and if the living world perishes it's just collateral damage. Key to their plans is the amnesiac Shinigami Senna. 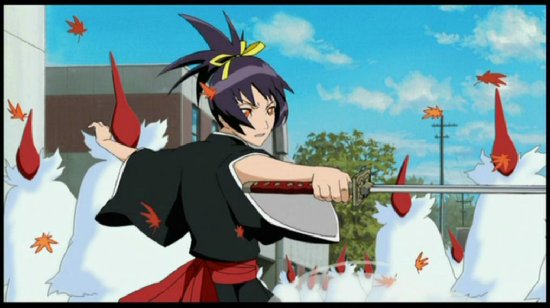 Bleach goes anamorphic for the movie, and it all looks wonderful. There's a step up in animation, the level of detail and the intricacy of the world design takes a leap upwards, and with the added CGI and wider scope, it looks as filmic as it's supposed to be. The transfer itself is burdened with the perennial annoyance of a standards conversion, but it only shows in the jerkiness of some of the pans. In terms of sharpness, clarity and consistency, this is as good as Bleach has ever looked, a whole different level to the television series. 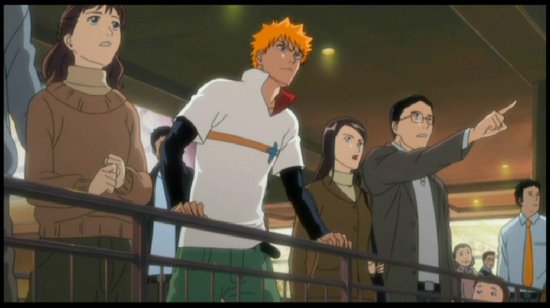 You have a choice between DD 2.0 Stereo English and Japanese, along with an optional translated subtitles track. The dialogue is clear enough in both versions; the film gets some nice music to keep the action going, with a surprising amount of classic orchestral score in a show that usually opts for the rock and electronica. The only drawback I can find is an absolutely daft place for a layer change, the sort of spot that has you briefly wonder if your DVD player just broke.

Buy the US release and you'll get 5.1 soundtracks in both languages.

It's odd that the animated menus are silent, but all that you'll find on this disc are the trailers for Bleach, Naruto the Movie, Death Note, Buso Renkin and Mar.

The American fans got a two-disc special edition with a commentary, featurette, production interviews, original movie booklet, storyboards and movie trailers, but who cares what the Americans got! 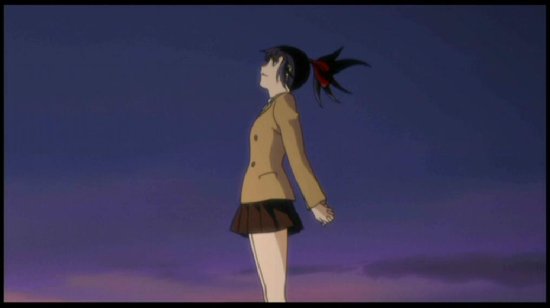 The first Bleach movie turns out to be something pretty amazing. It's saddled with all the problems that a tie-in movie has, a long and complex back-story, an inability to move the plot forward, and an obligation to satisfy fans of the franchise first and foremost. It takes all that baggage, and still managed to tell an entertaining, exciting, and most of all emotionally engaging story. It gives the Bleach universe a truly broad and cinematic scope, it features all the major characters, even if only briefly, and it provides plenty of action, and all the technobabble that existing Bleach fans will demand from the movie, but it turns out to be a downright enjoyable movie in its own right. The biggest issue is that it's truly a film for the Bleach fan, it builds on and uses all that has come before, and anyone new to the franchise will be lost in terms of terminology and character relationships, and all the character cameos will mean nothing to them. The thing is that the main characters, Senna especially are so strongly drawn and universally engaging, and the story's themes are so well brought across, that even a complete Bleach novice will be able to gain some satisfaction from this movie, even if most of the arcane aspects of the plot fly overhead. 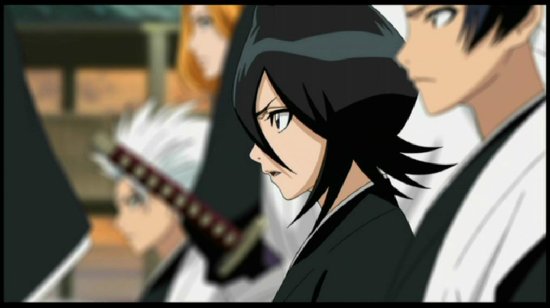 It's all down to Senna, the central character in this film. She is surprisingly well written, more than just a guest of the week, layered, complex, engaging, likeable, and playful, and with an excellent voice performance that highlights these aspects. It's the friendship that develops between her and Ichigo that is at the heart of this film, he initially views her with mistrust, and gradually warms to her as they spend more time together. Her story arc is fundamental in this film, her search for her identity, and trying to understand where she came from. It's an appealing vulnerability at the heart of a strong, forthright character, and whenever she is on screen, it's hard to tear the attention away. The emotional connection that forms between her and Ichigo develops naturally, and you can see why he stands up for her, and risks all to save her. I must admit that there was a point, some fifteen minutes from the end, where I was reminded that this was a spin-off movie, unable to alter the series continuity, and I felt a twinge of disappointment. There is no Senna in the TV series, but I really wanted there to be, so integral she seemed to the Bleach universe in the film. But the film manages to give an ending (after the end credits) that is poignant, a little tearful, but oddly hopeful as well. 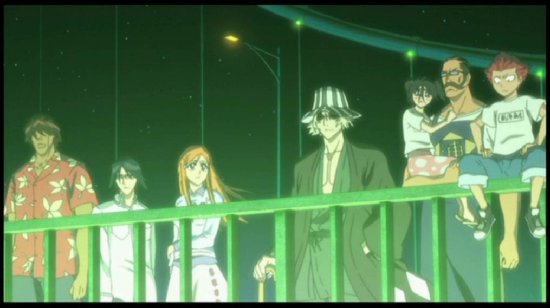 So much for the mushy stuff, Bleach fans will be more interested in the action, and there's plenty of it, Zanpakutos drawn, Bankais flying, and all the major characters from the Soul Society, and all of Ichigo's earthbound friends making an appearance. Orihime, Chad and Uryu may have little to do in this film, but after the Soul Society arc, it was good to see all the Shinigami Squads fighting on the same side for a change. There are plenty of good guy bad guy confrontations to the film, and the conclusion is a good 20-minute action sequence. You certainly won't be disappointed in that regard. 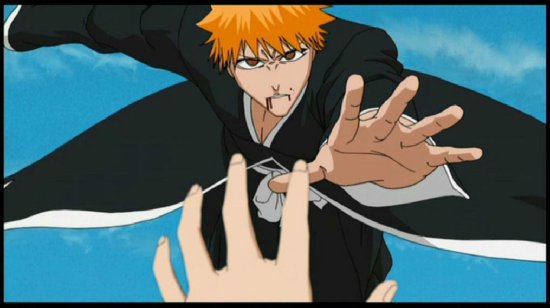 My experiences with Bleach so far haven't been all that fulfilling. I thought the first season was entertaining, with an interesting premise, a real world of Hollows and Shinigami battling in the background, a sort of Ghostbusters with swords, and there was a splendid mix of comedy and action. That fell by the wayside for the subsequent two seasons, which took us on a lengthy sojourn in the Soul Society, with plenty of technobabble, character overload, and Shonen combat tedium that really only resolved itself satisfactorily with the final ten or so episodes of the arc. The film takes the best of the Soul Society arc, and also delivers on the promise of the first season, with a grand and epic story, superb animation, and an emotionally engaging and rewarding central character arc. The first Bleach movie, Memories of Nobody is the best Bleach so far. If only it had a little more universal audience appeal.