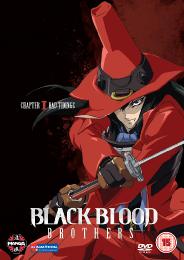 Synopsis:
It's been a decade since the Hong Kong Crusade, the sacred war between humans and vampires caused by the rise of the Kowloon Children, a new breed of bloodsucking monsters with an infectious bite with the power to immediately make the victim part of the evil bloodline. The uprising of the vampire Kowloon King and his minions was eventually ended by an Old Blood vampire called Jiro Mochizuki, also known as Silver Blade after his lethal weapon of choice. Following the war, a secret city dubbed the Special Zone was established offshore just outside Yokohama, Japan, where any surviving vampires could live unknown to most of the human world.

Now, Jiro and his younger brother, Kotaro, are travelling to Japan in the hope of reaching the Special Zone to live in peace with others like themselves. Along the way, they discover a plot to infiltrate the Zone is being hatched by a group of Kowloon Children survivors of the war and they find themselves caught up in a fierce battle between human soldiers, the Kowloon Children and more sympathetic vampire refugees. As old enemies from his past begin to emerge, Jiro realises the very existence of the Safety Zone is under threat. In the midst of his trying to make sense of the chaos surrounding him, Kotaro is kidnapped by one of the Kowloon Children forcing Jiro to once more draw forth the Silver Blade and to fight for those he loves and the things in which he believes.