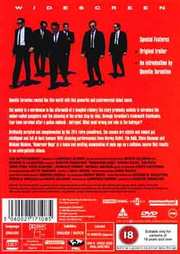 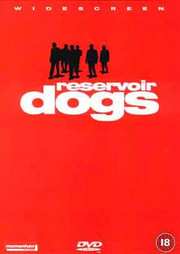 Set mainly in a warehouse in the aftermath of a bungled robbery the story gradually unfolds to introduce the colour-coded gangsters and the planning of the crime step by step, through Tarantino`s trademark flashbacks. Four have survived after a police ambush - betrayed. What went wrong and who is the betrayer?

Brilliantly scripted and complemented by the 70`s retro soundtrack, the scenes are stylish and violent yet intelligent and full of dark humour. With stunning performances by Harvey Keitel, Tim Roth, Steve Buscemi and Michael Madsen, `Reservoir Dogs` is a tense and exciting examination of male ego on a collision course that results in an unforgettable climax.

I`ve been waiting a long time for this film to come to UK R2, after the poor non-anamorphic R1 disc, and the German only European release, it was with great anticipation that I sat down to watch the film

The story mostly concerns the aftermath of a bungled jewel heist, and how the criminals involved deal with a situation gone awry. Set predominantly in an abandoned warehouse, we are introduced to the main protagonists by the clever implementation of non-sequential flashback sequences. It is between these flashbacks that the four surviving gangsters try to figure out what went wrong, and who is to blame.

Right, enough with the story, which I`m sure most people are familiar with by now. What I was interested in was whether Momentum could do the film justice. On the whole, I`d say they`ve succeeded.

The best thing about Reservoir Dogs is the transfer. This is one of the best looking films I`ve seen on DVD, a great achievement considering the film is the best part of a decade old now. The image is very clean, sharp, and colour balance is spot on. The film is presented in anamorphic 2.35:1 (yay!) and looks sensational.

Here comes the caveat. Rather than the 5.1 remix of the R1 disc (which is actually 4.0 I believe), we have the original stereo track. I know the purists would say that this is the original track, and that it’s the way the film was presented in theatres, but I would’ve loved the full surround mix as well. Why both couldn’t be included on the disc I don’t know. That said the track is good; dialogue is clear, and the various 70’s tunes are great. As this is such a dialogue heavy film, the omission of a surround track doesn’t harm it as much as it could have.

Now we move on to the extra features. Not brilliant was my first thought. Included are the original trailer, and an interview with Quentin Tarantino in which he discusses the origins of the film. A longer version of the interview is included in the form of an Easter egg, but it doesn’t add much to the proceedings. The animated menus are really nice though, and the catchy ‘Coconut’ song loops in the background.

Overall this is a good, if not stunning, presentation of an excellent film. Reservoir Dogs is, for me, Tarantino’s best picture, and deserves a place in any DVD enthusiast’s collection.
posted by Chris Gould on 1/12/2000 01:28
9 / 10

I`m a fan of Tarantino, he directs some quality films and has a style of his own. This disc is not a spectacular one, but for the content alone it is worth a watch.

This was Quentin Tarintino`s first film and probably his best.
Without giving away too much plot, the film is about a gang of criminals whose attempted bank heist has gone horribly wrong and one of the gang has betrayed them. It is a very violent and powerful film especially the ending which I shall reveal nothing about.This is a film you must not miss.

The picture quality of this DVD is perfect. The picture is well detailed throughout and there isn`t the slightest hint of any picture problems. The sound is also good although it is not a DD5.1 mix which is a bit of a shame but the sound is nice anyway. In terms of extras, we get a trailer and a 9 minute intro from Tarintino himself. He reveals quite a bit of interesting info and is worth a watch. If you want more, highlight a bloody ear on the special features menu and you get the full 26 minute interview. This longer version is also enjoyable and interesting. The menus are excellent with a cool blood wash when you make a selection, similar to one seen from the beginning of James Bond films.

Overall, this film is treated very well. Although a DD5.1 mix would have been nice as well as a documentary on the film and its controversial nature, the picture, interview and interactive menus make up for this. If you want better audio, buy the R1 version. However, it does not contain a anamorphic transfer or the interview. If you want the best picture, then buy this.
posted by AD1986 on 18/4/2001 03:22
8 / 10

It centres around the aftermath of a diamond heist gone wrong, and the gang`s effort to uncover the suspected "rat".

Harvey Kietel, Tim Roth and Michael Madson are brilliant as the main stars of the film and along with Steve Buscemi are the one`s that share the most screen time.

The film was initially denied a video certificate in England, mainly thanks to the now infamous ear cutting scene. There`s nothing particulary graphic about the actual scene the real impact comes from the extremely realistic performance of the victim. When people get hurt in Tarantino films they don`t get all heroic they panic and scream in pain, and this is what makes the film so realistic.

The screenplay is fantastic, and tarantino proves himself to be more of a writer than a director, this said the film is very well shot, the ending is extremely downbeat and gives the film great cult status. The opening scene discussion in the coffee shop must go down as a modern film classic.

The picture quality on the disk is excellent, although there`s not much in the way of colour the black and white`s never lose visual clarity and there is no sign of artefacting. The sound is stereo but I don`t think there`s a pro-logic version in exsistence.

Onto the extra`s and this is quiet a let down considering the amount of controversy the film stirred up they could have included all sorts, all we get id the original theatrical trailer and an interview with Quentin Tarantino, there is an hidden feature which you can access by pushing towards the cops ear on the extra feature`s screen, but this is just an extension of the interview.

Final comment, if you like the film like I do then I thouroughly reccomend this disk, i find it hard to believe this is the definetive release but for the time being is more than adequate.
posted by chris21 on 3/5/2001 01:18
7 / 10

This is by far Quentins best film, forget Pulp Fiction or Jackie Brown. From the opening sequence to the final stand off this film kicks some serious ass when put up against similar films. Yes the dvd does lack that audio commentary and although a trailer and introduction are cool, this really cries out for a huge 2 disc special edition. The sound is excellent and picture isnt bad either. So are you gonna bark all day little doggy or are you gonna buy this dvd?
posted by spiller on 5/2/2002 11:09
7 / 10

One of the greatest movies ever made, it gets a fantastic restoration picture wise, and a more than adequate 2.0 track. Although Momentum Pictures could have tried a bit harder with extras, I`m more than happy with this DVD. It`s in my little green bag.
posted by Gangster No 1 on 5/4/2002 23:18
8 / 10

A great heist film, especially considering its Quentin Tarantino's first effort! We get a good clean transfer; it's just a shame about the extras. The intro from QT is interesting and runs at slightly over 10 minutes.

MOVIE
My first review in a while. I had to put off with DVDs what with University, but here we go...

I was never the greatest Tarantino fan but Kill Bill completely changed all that. That film convinced me to go buy The Tarantino Boxset, and here is the review of his first proper film, the low budget crime drama that is Reservoir Dogs. In my opinion, this is without a doubt his worst film. Thats not saying its awful, and he has only made 4, but its poorer relative to the others. There is of course still the classic OST, which is no-where near as good as Kill Bill, and some wonderful scenes. Who can forget the cop torture and of course the stunning opener. The acting is generally top notch. Kietel, Roth, Madsen and in particular Buscemi are all great, but I still don`t like Chris Penn at all. This film is definately worth seeing at least once, for the iconic imagery of the film, and of course Tarantinos wonderful time changing ideas, showing the aftermath and buildup to a diamond heist is a great idea, and I love how it shows very little of the heist itself. Good, but not Pulp Fiction essential.

VIDEO
For such a low budget film, and a very early DVD, the picture is stuuning, and apparently better than the more recent R1 SE. Colours are great, as are blacks, all important due to the Dogs attire. All in its proper ratio, a great effort from Momentum

AUDIO
Low budget, so on this release we have Stero only, but it s very dialogue heavy, and everything is clear. It is fine for the movie. No problems

EXTRAS
A very early disc, and very few extras are put on the very ugly menu screens. There`s the trailer, which is a one watch, and then a 9 minute documentary/intro to the film, which is also available as an extended version in an easter egg oddly. It is a good watch though, and if you can get this cheap it is worth a buy for the stunning picture.
posted by cartoonjonah on 30/11/2003 18:46
3 / 10

Movie- Set mainly in a warehouse in the aftermath of a diamond heist gone wrong, RD introduces us the world of colour coded gangsters and the planning of the heist step by step through Tarantino`s trademark flashbacks. This is QT`s first and most controversial movie and due to it`s graphic nature, it didn`t get a full release in the UK. In addition to that, the ear cutting scene caused huge grieve to the BBFC but decided to pass it uncut. When I see it today, the violence is not as bad as it was 12 years ago since most of the violence is implied. Empire considers Dogs to be the most influential movie of the 90`s. Film: 9/10

Video- For an early release, the video is spot on and in it`s original 2.35:1 anamorphic widescreen. Colours are well defined and there is any specks seen throughout the whole movie is kept to a minimum. A pleasing transfer.

Sound- Shame, no 5.1 audio here only 2.0. Dialogue is clear throughout the film. Nothing much to say here. QT has made the right choices of music. They fit the mood of the film very perfectly.

Extras- Aside from the Intro and trailer, there is only a hidden interview with QT which can be accessed in the special features section.

Overall- Tarantino`s debut is brilliant, 70`s soundtrack, stylish violent scenes and stunning performances by Harvey Keitel, Tim Roth, Steve Buscemi and Michael Madsen. If you can wait longer, there is a special edition of RD coming soon but it`s inferior to the R1 or R4 versions.
posted by alias-rf2 on 1/6/2004 22:19