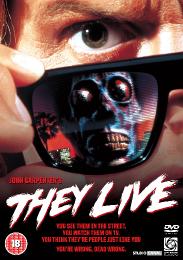 John Nada (Roddy Piper) travels to L.A. and gets a job on a construction site. As he has nowhere to stay, co-worker Frank (Keith David) takes him to a transient camp, where he gets a hot meal and a bed. Some of the residents watch a pirate TV station that gives them headaches.

Following a police raid on the church that broadcasts the pirate signal, Nada discovers a box of sunglasses and, when he tries a pair on, sees the world in a different light. They reveal subliminal messages to obey, sleep, consume, submit and watch TV written everywhere and some 'people' are in fact alien monsters who control society.

After shooting some aliens, kidnapping a TV presenter (Meg Foster) and going on the run, Nada must find out who made the glasses to learn the truth. 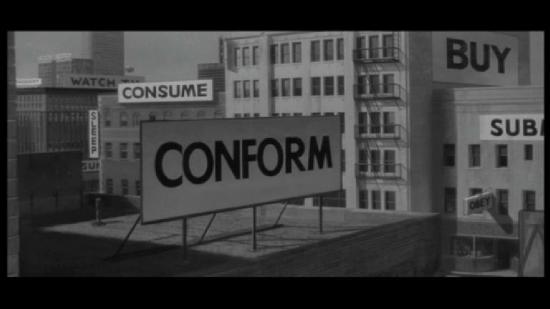 A very good anamorphic 2.35:1 transfer, which just shows how effective matte paintings and primitive make-up were, and still are, twenty years later. 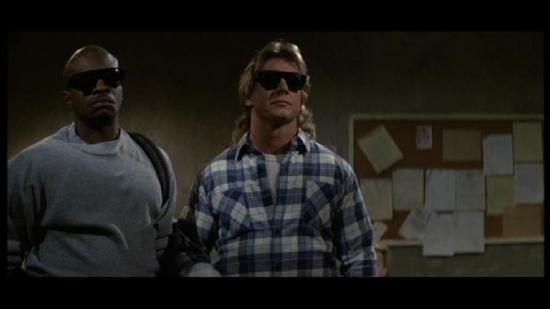 Dolby Digital 5.1 surround or 2.0 stereo and both are very good and the 5.1 is an excellent mix with good separation and clarity. Carpenter's fine score adds to the atmosphere and tension. 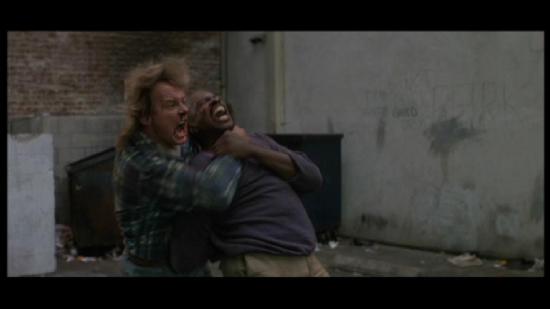 The commentary with John Carpenter and Roddy Piper is a rather loud and raucous affair, with the ex-wrestler dominating proceedings, but allowing Carpenter enough time at the microphone to make it an informative listen.

There are profiles of John Carpenter, Roddy Piper and Meg Foster in which they talk briefly on-set about their roles and the film.

The making of is not really worthy of that title, running at only 8 minutes and adding little.

There is also the semi-obligatory theatrical trailer. 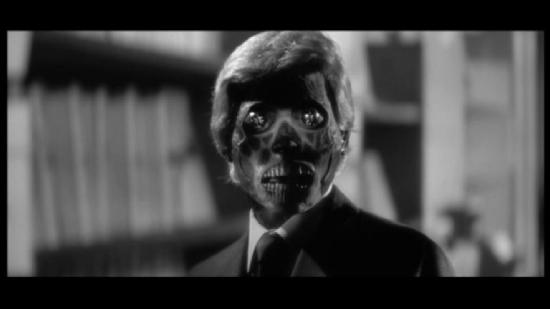 They Live is a great mix of action, sci-fi and horror, with a surprisingly good performance by recently retired wrestler "Rowdy" Roddy Piper, who is well supported by Keith David.

It's impossible to talk about They Live without mentioning the scene where Nada tries to persuade Frank to put on the sunglasses and has to resort to force. The result is one of the longest fist-fights ever committed to celluloid, which needs to be seen to be believed!

Almost a prototype for The Matrix, the world in They Live is an illusion used to control humans for the benefit of the power elite - some aliens from around the galaxy in this case. Whilst not Carpenter's best known work, it is a fine piece of science fiction which deserves a wider audience.

This is available to buy individually, or as part of John Carpenter: The Collection.